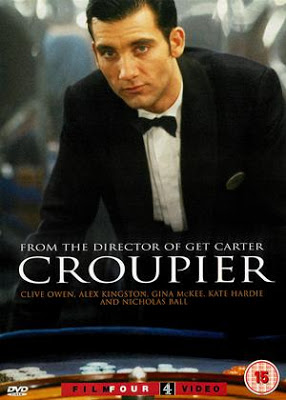 The best film of 2000 introduced super-talented Clive Owen to America.

Croupier, starring Clive Owen, was a 2000 neo-noir art film that had an excellent run and many critical kudos. In some art houses it lasted six months. Fully 98% of the critics evaluating it at rottentomatoes.com praised it, and recently more than 91.3% of the 11,306 viewers rating it at imdb.com gave it thumbs up.

Peter Travers of Rolling Stone declared, “Croupier is taut, tense and enthralling, as smart and surprising as its protagonist.”

Owen plays a novelist and reformed gambler who gets a job as a blackjack dealer and roulette croupier in a London casino. A sensual, mysterious South African woman (Alex Kingston) persuades him to be the “inside man” in a late-night casino robbery. The film is full of fascinating, somewhat off-beat characters, and the rich, detailed casino atmosphere is very involving.

Screenwriter Paul Mayersberg was nominated for the “Best Motion Picture” Edgar award, and the National Board of Review selected it one of the top 10 films of 2000. One of the many reasons I like it so much — I just watched it again on Netflix Instant streaming — is that Mayersberg intentionally and successfully broke the five major rules of screenwriting dogma.

I have interviewed hundreds of screenwriters and TV writers for publications of The Writers’ Guild, and my talk with Mayersberg is my favorite. After you see the film — but not before, as it contains too many spoilers — you may well enjoy that insightful interview explaining how he wrote it “upside down.”

The film is well directed by Mike Hodges, who helmed the 1971 Michael Caine classic Get Carter and the not-so-classic Morons From Outer Space.