Alan Waldman: ‘Rumpole of the Bailey’ is Superior Legal Britcom 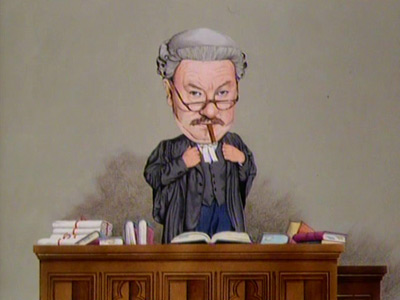 Rumpole of the Bailey, a classic British TV legal series, delighted 95% of viewers.

[In his weekly column, Alan Waldman reviews some of his favorite films and TV series that readers may have missed, including TV dramas, mysteries and comedies from Canada, England, Ireland and Scotland. Most are available on DVD and/or Netflix, and some episodes are on YouTube.]

Rumpole of the Bailey was a much-beloved comic English legal drama, starring the superb Leo McKern and marvelously written by creator John Mortimer. It ran for 43 episodes in seven seasons, between 1978 and 1992 (although it is set between 1967 and 1992).

Horace Rumpole is a clever, cynical, larger-than-life barrister who defends all comers but refuses to plead guilty — or to prosecute — at central London’s legendary criminal court, the Old Bailey. He is dominated by his steamship of a wife, Hilda (played first by Peggy Thorpe-Bates and later by Marion Mathie), whom he refers to as “She Who Must Be Obeyed.” (Tee shirts bearing this logo are worn by some American wives.)

After work, Rumpole repairs to Pomeroy’s Wine Bar, where he quaffs a vin rouge he calls “Chateau Thames Embankment.”

Mortimer was an Old Bailey barrister for 36 years, defending accused criminals and often fighting against famous obscenity prosecutions. He was also an excellent screenwriter (1965’s Bunny Lake is Missing and 1999’s Tea With Mussolini) and playwright (whose touching, autobiographical A Voyage Round My Father, televised in 1984, starred a magnificent Laurence Olivier as Mortimer’s blind, opinionated father).

The series was widely acclaimed and was nominated for 10 top British and American Awards, including three “Best Actor” BAFTAs for McKern, an Edgar and a BAFTA for Mortimer, and two “Best Miniseries” Emmys. More than 94.5% of viewers rating it at imdb.com gave it thumbs-up, and 47.2% considered it 10 out of 10. Everyone I know who has ever seen Rumpole declares that they loved it, as my three wives and I did.

All seven Rumpole seasons are available on DVD and Netflix, and many episodes are on YouTube. Rumpole also stars in many charming novels and short stories by Mortimer and a great number of British radio programs.

1 Response to Alan Waldman: ‘Rumpole of the Bailey’ is Superior Legal Britcom