Alan Waldman : ‘Waiting for God’ is My Favorite TV Sitcom Ever! 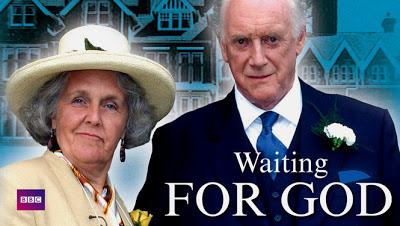 Graham Crowden and Stephanie Cole are priceless as feisty seniors in an English retirement home.

It’s hard to pick my favorite TV comedy of all time because there are so many brilliantly funny ones (none of them American!) — Father Ted, Fawlty Towers, Absolutely Fabulous, The Vicar of Dibley, Chef, As Time Goes By, Blackadder, and The Thin Blue Line — but Waiting for God probably noses them all out, because its characters are so adorable, its performances are so masterful, and its writing (by Michael Aitken) is so very witty.

Also, incredibly, it deals intelligently with important issues affecting the elderly, such as marginalization, prostate problems, and senior sex.

Because our local Los Angeles PBS station ran its brilliant 48 episodes again and again, my wife and I watched and loved Waiting for God repeatedly — even though we knew which jokes were coming.

This 1990-1994 Britcom was nominated for a Best Comedy BAFTA, and Stephanie Cole justifiably was chosen the Best TV Comedy Actress at the British Comedy Awards. More than 92.8% of those rating the series at imdb.com gave it thumbs up, and 37.1% considered it a perfect 10. All five seasons are available on DVD and Netflix/Netflix Instant, and many episodes, including this one, can (and should) be enjoyed on YouTube.

There he meets, befriends, and falls in love and in league with cynical, grumpy, atheist, retired combat photojournalist Diana Trent (simply sublime Stephanie Cole) and they soon shock the community and his children with their enthusiastic sex life. Each week they cleverly conspire to thwart the machinations of vain, slimy, tightwad Bayview boss Harvey Baines (a very funny Daniel Hill). Harvey is devotedly assisted and worshipped by maddeningly cheerful, prudish, plain assistant Jane Edwards (a fabulous Janine Duvitski).

Another very funny and lovable character is little octogenarian Basil Makepeace who is forever propositioning the old lady residents and then outlandishly bragging of his conquests. One unique aspect of the series is that it is primarily told from the points-of-view of the elderly characters, with most of the younger ones depicted as buffoons.

Over the five seasons there are many surprising and enjoyable plot developments. We delighted in watching this series over and over again because it is like watching great music, with Diana’s tirades against “the idiot Baines” or Basil’s bedroom boasts becoming beloved favorite, much-anticipated arias. Check it out!