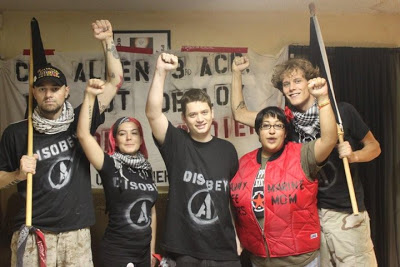 KILLEEN, Texas — Under darkness at about 4 a.m. this morning, buses carrying the 3rd Armored Cavalry Regiment (3rd ACR) to planes were stopped by a group of five protesters that included two Iraq veterans, one Afghanistan veteran, and one military spouse whose husband had been deployed to Iraq three times.

The Fort Hood Disobeys group clambered down from a highway overpass where supporters held banners and signs. Holding banners that said, “Occupation is a Crime” and “Please Don’t Make the Same Mistake We Did. RESIST NOW,” the protesters spread across Clarke Road. Police with automatic weapons and dogs beat them out of the roadway. They were not arrested.

Deployments are usually scheduled for the afternoon with family members present as soldiers board the buses. Whether this deployment left in the dead of night because of planned protests is unknown, but averting media attention was undoubtedly part of the Army calculus.

As the corporate media heralds the “end of combat missions,” the truth about the troops deploying to Iraq has not made mainstream news. Two more deployments of the 3rd ACR, a combat regiment, are scheduled this week. The total 3rd ACR troop deployment to Iraq from Fort Hood will be about 3,000. These will be added to the 50,000 troops remaining.

“Operation New Dawn” is the new brand for the U.S. occupation in Iraq. As combat deployments continue, it rings as hollow as George Bush’s proclamation of “Mission Accomplished.”

Two more upcoming events are aimed at peeling back the mass deception surrounding the “end of combat operations.”

Dahlia Wasfi, an Iraqi-American doctor, will speak next Sunday in Austin about the U.S. Policy in Iraq: A Humanitarian Disaster. The event is co-sponsored by Texas Labor Against the War and CodePink Austin and will take place at the Texas State Employees Union meeting hall, 5 p.m., Sunday, August 29, 1700 South First, Austin.

The following morning, there will be a press conference at Under the Hood GI Cafe in Killeen that will highlight many facets of the Iraq debacle, including the impact on soldiers, military families, Iraqis, and funding to meet domestic needs. Dahlia Wasfi will speak at this press conference and will be joined by Rep. Lon Burnam from Fort Worth, Texas. Representatives from several groups including Iraq Veterans Against the War, Veterans for Peace, CodePink, and Texas Labor Against the War will be present. The press conference will take place at 10 a.m., Monday, August 30, Under the Hood, 17 South College, Killeen, Texas.

[Alice Embree is a long-time Austin activist and organizer, a former staff member of The Rag in Austin and RAT in New York, and a veteran of SDS and the women’s liberation movement. She is a regular contributor to The Rag Blog and is treasurer of the New Journalism Project.]

Following are personal statements from four of the participants in the action:

I am a Marine veteran of the war against the people of Iraq, a Purple Heart recipient, and a third generation military service member. I joined the Marines in June of 2003, believing the lies about weapons of mass destruction and an imminent threat to our safety. I have since come to learn that these wars and occupations do not keep the people of the United States or the Middle East safe, but instead serve the interests of politicians, capitalists, and corporations: the ruling elite.

These unjust wars and occupations rob the people of Iraq, Afghanistan, Pakistan, and Yemen of their dignity and their right to self-determination and serve to make the people of both the Middle East and the United States less safe. They also serve to further destabilize a region that has suffered under the boot-heel of western colonialism for over a century. The U.S. Empire also supports both financially and militarily the brutal apartheid regime that occupies Palestine. All of this is done in our name with our money, and I am here to say “Not in my name!”

The recent information leaks about the U.S. Empire’s wars lay bare their war crimes and crimes against humanity. We must face the truth, even if it makes us uncomfortable or shows us something about ourselves that we don’t want to see. When we find the truth, we must respond accordingly. I will not be complicit in the killing of people. Since I do not believe that the government or the capitalists will end these wars, I will vote with my body.

I was a sergeant in the Army for five years, stationed at Fort Hood the entire time, save two deployments to Iraq totaling 26 months. I was a Signal Support Systems Noncommissioned Officer, coordinating communications for various commands. I was honorably discharged in Jan., 2010, and have been organizing in the veterans peace movement ever since.

I first began to question the war in Iraq during my first deployment in ’05-’06. After my friend Robbie was killed, I was very deeply affected. I started questioning why we were in Iraq. It felt like he had died for nothing. After returning from Iraq, I planned to leave the military. I was stop-lossed and forced to return to Iraq for 15 months, in total held beyond the length of my enlistment more than 450 days. Since leaving the military, I have been active with the veterans peace movement, speaking out about my experiences and supporting troops who refuse to fight.

I am doing this today because I can’t allow this war in which I have fought to continue. I can’t allow other soldiers to make the same mistake I did, deploying in support of a war crime. As a veteran of Iraq, how could I not do this today? For the people I helped occupy, for the friends I lost and stilI have over there, for the soldiers on those buses. How could I not do this today? I should have disobeyed. I should have never boarded those buses to Iraq. I wish someone had tried to stop me.

I am a former Army sergeant and war resister. I was press-ganged into the Army by the Alabama Juvenile “Justice” System in 2002. While in the military, I occupied the nations of Japan and Germany for more than four years, with shorter tours in the Philippines and Afghanistan. I was a Public Affairs noncommissioned officer specializing in strategic communications. In reality, I was a propaganda artist. I was discharged honorably to the Individual Ready Reserve in 2007.

While I have always been against the war in Iraq, I began resisting it actively in 2008, after I received mobilization orders for a year-long deployment to Iraq. I refused those orders in Congress in May of 2008, calling my orders illegal and unconstitutional. I believed appealing to Congress would end the war. When 13 Members signed a letter of support for my decision and sent it to Bush, I thought we had won a victory for peace. This was more than two years ago. The president has changed, and the wars and destruction drag on.

Today, I am blocking the deployment of the 3rd Armored Cavalry Regiment with my fellow vets and military family members because the wars will continue to victimize our communities until we halt this bloody machine from within. I am putting my body on the line in solidarity with the people of the Middle East, whose bodies have been shot, burned, tortured, raped, and violated by our men and women in and out of uniform. I cannot willfully allow Americans in uniform to put their lives and the lives of Iraqis in jeopardy for a crime. We are here because we have a responsibility to ourselves as veterans and as humans of the world. I will not rest until my people, ALL PEOPLE, are free.

In Struggle and Solidarity,

I have been an Army wife for 18 years. My husband has been deployed three times since the wars began. During his second deployment, he was severely wounded and medevaced to Walter Reed Army Hospital on life support. Even though he had posttraumatic stress disorder and traumatic brain injury,and suffered three fractures in his back, three fractures on his pelvis, and countless other injuries, the Army deployed him a third time. This was devastating to our two daughters, our step-son and to me.

Three months after my husband deployed for the third time, our stepson called to inform me he was joining the Marines. That was the exact moment I realized that our children would be fighting these endless wars. I decided that I needed to start resisting.

The reason I am doing this today is because for the past three years that I have been speaking out and advocating for Soldiers, things have only gotten worse. I have heard countless stories from vets and activevduty soldiers that give people nightmares. I have heard stories from family members that would shock people awake if they would just listen! Our military community is being destroyed!

If these wars are destroying our soldiers and military families with 12 to 15-month, often repeat deployments, how do you think the Iraqi and Afghan people doing? They have been living these wars 24/7, 365 days a year for nearly a decade! My youngest daughter is an Operation Iraqi Freedom baby. She was less than one-year-old when her father left to invade Iraq. I look at her, and I see an Iraqi or Afghan child having to live in constant fear with no end in sight! I am doing this for our community, for my girls, for my husband and our Marine. I am doing this for the Iraqi and Afghan People. Enough is enough. If soldiers really want to go fight, they’ll have to go through me.