And You Will Be Brought to Justice, No Matter How Long It Takes 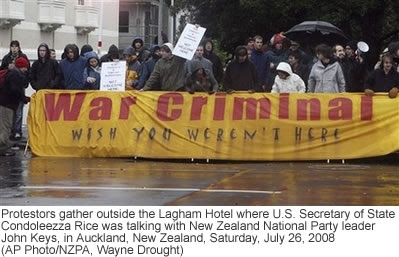 WELLINGTON, New Zealand – A group of New Zealand students offered a higher reward Saturday for the citizen’s arrest of U.S. Secretary of State Condoleezza Rice for war crimes after another group withdrew their own bounty, accusing police of threatening them.

Students at Victoria University in the capital, Wellington, doubled the original reward offer to US$7,400, according to Joel Cosgrove, the student president.

Cosgrove said Rice should be arrested because she is responsible for the deaths of at least 600,000 Iraqis killed since the 2003 invasion by U.S.-led coalition troops.

The new bounty came a day after the Auckland University Students’ Association made a formal complaint to local police seeking Rice’s arrest for “overseeing the illegal invasion and continued occupation” of Iraq in violation of the Geneva Conventions.

The Auckland students offered a reward of 5,000 New Zealand dollars (US$3,700), but late Friday withdrew the bounty. Student President David Do said authorities had threatened criminal charges for anyone trying to make a citizen’s arrest.

“It is unfortunate the police have threatened students for essentially a form of peaceful protest and civil disobedience,” Do said.

Superintendent Brett England, the district police commander in Auckland, New Zealand’s biggest city, warned anyone attempting to penetrate the security around Rice would be punished.

“The consequences of such a security threat could be very serious indeed,” England said.

Rice, asked about the demonstration at a news conference Friday, said “student protests are particularly a long-honored tradition in democratic society.”

“I can only say that the United States has done everything that it can to end this war on terror, to live up to our international and national laws and obligations,” Rice said.

About 70 people protested Saturday outside Government House, where Rice was meeting with Prime Minister Helen Clark.