Bill Freeland : With ‘Occupy,’ the People are the Point 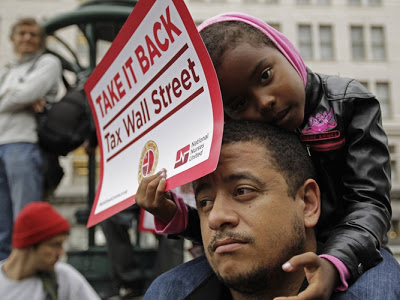 Image from Addicting Info.
‘Occupy America’:
The people are the point

The “Occupy” movement, which began as a small gathering in a private park near Wall Street in New York City in September, has already swept across America and into another dozen countries around the world.

While these gatherings are local, their concerns are global. They are responding to economic and social trends that have been developing for decades. But the catalyst was the financial collapse of 2008.

In the aftermath of that collapse, what has become clear to many Americans­­ — following aggressive bailouts for the banks but inaction on lost jobs and homes — is that the nation’s economic system functions differently depending on which side of this divide you are on.

As a result the CBO reports that now 1% of Americans control 35% of the nation’s wealth, which is the highest level of wealth disparity since 1929, the last great financial crash.

Occupy supporters advocate for the “99%ers,” their now-famous shorthand for the majority of Americans. These are the people who increasingly find themselves with under-water mortgages and dangerously depleted savings. And with persistent 9% unemployment, they are just as likely to be out of work as out of their homes.

But when they look to Washington, what they find is gridlock. Most solutions include severe spending cuts, which many economists warn will likely result in a replay of the Hoover Administration’s policies of the early 1930s that only deepened that generation’s Depression.

And lawmakers are not the only bad actors. While the financial fallout continues to be borne by the victims of the crisis, those on Wall Street and elsewhere who created the mess have kept their profits without ever being held to account.

Unlike with the savings and loan crisis of the 1980s, today — after three years and hundreds of investigations — not a single criminal charge has been filed by the Justice Department, the SEC, or any state Attorney General against a major figure in the financial industry.

For the Occupy movement, all of these developments are interrelated.

Financial and corporate interests hold the money and the influence they buy. That influence has produced the kind of tax code and financial deregulation that, over time, have lead directly to the huge economic imbalances which Occupy exposes.

Critics charge that the movement to date has no agenda to address all it decries. The Occupiers respond that, since the movement is barely 60 days old, the criticism is premature. But more than that, with their bottom-up approach, the process by which solutions are arrived at, they believe, is equally important as the solutions themselves.

It’s impossible to know now how public opinion will ultimately judge this effort. From my perspective, however, the movement at this early stage is similar to the lunch-counter-sit-in stage of the 1960s protests in the South. Except this time the demonstrators are fighting for economic, rather than civil, rights.

The loud turmoil and resulting media scrutiny is similar to those days 50 years ago, but it is also likely that someone is already at work on his or her own “I Have a Dream” speech.

1 Response to Bill Freeland : With ‘Occupy,’ the People are the Point