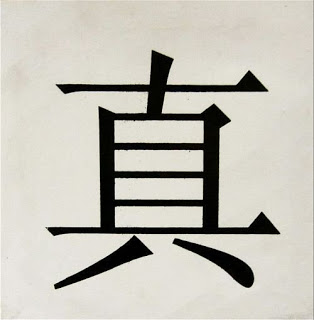 The Chinese character for truth.
(In 400 words)
What Is Truth?

Philosophy Now magazine runs an occasional contest: Write an answer to a philosophical question in 400 words or fewer. The winning essays are printed in the magazine. My essay in answer to the question “What is Truth” was selected[1], and I am pleased to present it here, followed by another winning essay by my colleague Robert “Little Bobby” Tables.

Several factors determine the truthfulness of a theory or an explanation of events: congruence, consistency, coherence, and usefulness.

Truth enables us to exert our power, in the sense of our ability to get things done, successfully. We master both the world of physical things and the world of ideas, of theory. What is true is what works to organize our practice and our thought, so that we are able both to handle reality effectively and to reason with logical rigor to true conclusions.

Truth is useful. Does that mean that what is useful is true? That is not a useful question. Let’s not ask what truth is; let’s ask instead how we can recognize it reliably when it appears. If a theory is congruent with our experience, internally consistent, coherent with everything else we know, and useful for organizing our thinking and practice, then we can confidently consider it true.

The following is Robert Tables’ essay on Truth:

Truth is interpersonal. We tell each other things, and when they work out we call them truths. When they don’t, we call them errors or, if we are not charitable, lies.

What we take as truth depends on what others around us espouse. For many centuries European Christians believed that men had one fewer rib than women because the Bible says that Eve was created from Adam’s rib. Nobody bothered to count because everyone assumed it was true. And when they finally counted, it was because everyone agreed on the count that the real truth became known.

Even when we are alone, truth is interpersonal. We express these truths or errors or lies to others and to ourselves in language; and, as Wittgenstein pointed out, there can be no private language.

But the most essential truth, the truth by which we all live our lives, is intensely personal, private. We might call this “Truth,” with a capital T. Even though each of us lives our life by it, it can be different for each person. Shall I believe and obey the Torah, the New Testament, the Quran, the Bhagavad Gita, the Zend Avesta, the Dhammapada? Or none of the above: shall I find my own Truth in my own way? Am I more authentic if I do so? What if I find my Truth and it sets me apart from others? Am I then authentically lonely?

We need a community of seekers with a commitment to meta-Truth, recognizing that everyone’s personal Truth is to be respected, even though it might differ from someone else’s.

But even in such a community, some beliefs would be acceptable and others not. My belief that I am exceptional and deserve preferential treatment, perhaps because I alone have received a special revelation, is not likely to be shared by others. Whether that changes my mind or not depends on how compelling are my reasons for believing it and how deeply I feel the need for acceptance.

From within the in-group we look with fear and revulsion on those who deny the accepted beliefs. From outside, we admire those who hold aloft the light of truth amidst the darkness of human ignorance.

And in every case it is we who judge, not I alone. Even the most personal Truth is adjudicated within a community and depends on the esteem of others.

This entry was posted in Rag Bloggers and tagged Bill Meacham, Philosophy. Bookmark the permalink.