Bridging the Gap : US Sponsors Forum on Che 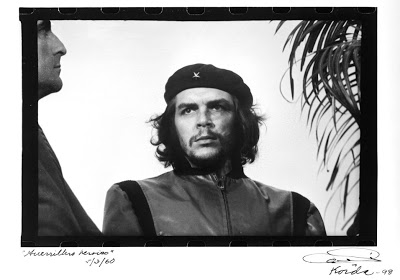 “Guerrillero Heróico.” This iconic photograph of Che Guevara by Alberto Korda is said to be the most reproduced of all time. Image from artdaily.org.

The forum was a creative way to reach out to the Argentines (and other Latin Americans) and try to repair the bad feelings the Bush administration had created there.

This is a perfect example of the difference between the Obama administration and the Bush administration. The Bush administration viewed the world in a very simplistic and unrealistic way. The world was divided into good and evil. There was no in-between. The good were composed of those people and countries who approved of the United States and agreed with our policies. Everything else was evil.

The Obama administration has a much more complicated view of the world. President Obama understands that just because a country acts in its own best interests rather than how the U.S. wanted, it does not necessarily mean that country is an enemy. Obama has decided to reach out to these countries on their own terms.

Last Friday, at the 35th International Book Fair in Buenos Aires, the United States sponsored and funded a forum on the revolutionary Che Guevara (who was from Argentina). Guevara was Fidel Castro’s trusted right-hand in the Cuban Revolution, who dedicated his life to fighting for the poor and oppressed people of the Americas.

The forum featured two readings and a discussion about a new book on the iconic power of Che Guevara. It was attended by dozens of people, including local elementary school students.

The current administration is smart enough to realize that while many in the United States don’t like Che Guevara, he is considered to be a hero in most of Latin America. The forum was a creative way to reach out to the Argentines (and other Latin Americans) and try to repair the bad feelings the Bush administration had created there.

This forum certainly won’t hurt our efforts to bridge the political gap with Cuba either.

1 Response to Bridging the Gap : US Sponsors Forum on Che