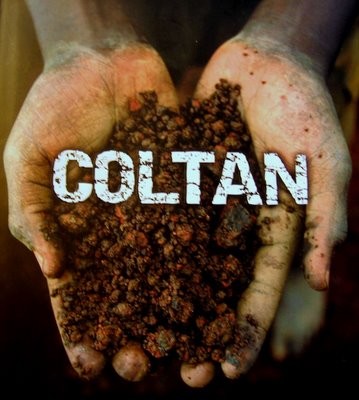 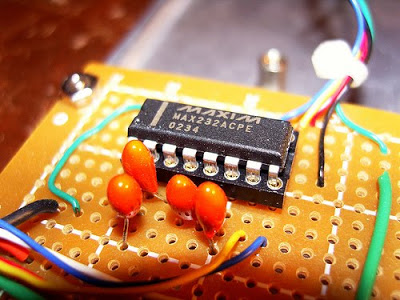 Above, image from Intimidad Violada. Below, capacitor made with coltan.
Valuable electronics ore mixes with oil
To produce rumbles of war with Colombia

WARS. There are so many of them that foreign correspondent and world traveler Marion Delgado runs into them from time to time as he wanders the earth.

He was in Nicaragua during the Contra war, survived a Guatemalan coup, and was living in San Cristobol de la Casas that New Year’s Eve when the Zapatistas came to town to issue their declaration of war against the corrupt government of President Carlos Salinas in Mexico. He was briefly a prisoner of some sort of renegade armed group in El Salvador. When Colombia invaded Ecuador Marion and his companera Sylvia Avery were on the last plane out before the borders were closed.

Now, once again, he is uniquely positioned to watch the beginnings of a South American war up close. In Colombia he has had face-to-face encounters with Colombian Army (COLAR) anti-guerrilla units, the Fuerzas Armadas Revolucionarias de Colombia – Ejército del Pueblo, (FARC-EP,) and some paramilitary (paracos) each of which usually costs him a few thousand pesos. So, what is coltan and why might it interest Delgado, American taxpayers, and anti-war activists?]

CARTAGENA DE INDIES, Colombia — Coltan is the industrial name for columbite — tantalite, a dull black metallic ore containing the elements niobium (formerly “columbium”) and tantalum. The niobium-bearing mineral is columbite, hence the “col” half of the term. The mineral concentrates dominated by tantalum are called tantalite.

Niobium is used mostly in alloys, the largest part in special steel such as is used in gas pipelines. Although alloys contain a maximum of 0.1% niobium, that small amount improves the strength of the steel. The temperature stability of niobium-containing super alloys is important in jet and rocket engines.

Export of coltan from the eastern Democratic Republic of the Congo to European and American markets has been cited by experts as helping to finance the present-day conflict in the Congo. An estimated 5.4 million people have died since 1998 in the Congo conflict.

The upsurge in electronic products over the past decade resulted in a price peak in late 2000 with inflated high demand and price increases for the mineral, which lasted a few months. In 2005, the price was still at early 2000 levels.

Thanks to this mineral, the world has witnessed a reduction in size of all electronic devices. Tantalum is an ideal high-temperature superconductor, can temporarily store an electrical charge and release it when needed, and resists corrosion.

What does that have to do with a South American War? Well, a significant reserve of coltan was discovered in 2009 in western Venezuela. In 2009, the Colombian government announced that coltan reserves had been found in eastern provinces of Colombia.

In the minds of most Colombians, coltan came into existence only a couple of weeks ago, when the president of Venezuela, Hugo Chávez, announced the discovery of a giant coltan field near Venezuela’s border with Colombia. On Nov. 5, Chavez ordered a militarization of the Orinoco region to protect this strategic mineral because, he said, Colombian traffickers continue to cross the border, running through the Orinoco River basin, to extract the mineral. In what is titled Operation Blue Gold, 15,000 Air Force, Army, and Navy personnel will protect the coltan reserve, which straddles the Venezuelan states of Bolivar and Amazonas.

Vice President and Defense Minister Ramon Carrizalez visited the site of the reserve in an indigenous community called El Paloma, and said the troops would help combat drug trafficking and illegal armed groups in the region, in addition to protecting the reserve. “

We have more than 15,000 men deployed along our western border, combating all the crimes that occur along the border, as you know, crimes which come from another country and are not ours.

It is a mineral of strategic character, and therefore it stimulates the imperial appetite and the appetite of the business people who seek to obtain maximum profit without giving importance to environmental damage or the destabilization of countries.

He made specific reference to the civil war-plagued Democratic Republic of the Congo, where the world’s largest known coltan reserves lie, and where Belgium and the U.S. Central Intelligence Agency (CIA) collaborated to overthrow the first democratically elected prime minister, Patrice Lumumba, in 1964.

Called “blue gold,” “oil from the mud,” or “the new manna,” coltan has been found, besides in the Congo, in Australia, Brazil, China, and, more recently, Venezuela, Bolivia, and Colombia. Evidence of coltan deposits in the Orinoco region, especially in the Departments of Vichada, Guainía, and Vaupés, has generated a wave of traders, speculators, and armed groups around a business that this year alone could move more than $40 million USD. And that is only the tip of the iceberg.

For four years, coltan has been mined in eastern Colombia for export to international traders. A couple of months ago it was leaked to news media that a company had asked permission (licenses) to remove coltan in 35,000 hectares between Vichada and Guainía. Another four licenses are underway.

Coltan’s downside is violence spawned by greed. In Africa, the coltan bonanza — the mineral can bring between $60,000 and $100,000 USD a ton — has become fuel for multilateral conflict (often called the “world war of Africa”) which has killed hundreds of thousands of people. As many more have been displaced, and the accompanying environmental disaster of strip mining also involves the water sources of neighboring countries. Warring militias fight each other for control of coltan and other minerals in an endless spiral of violence.

There has been so much bleeding that for three years it has been prohibited to buy coltan from the Congo. However, Congo ore smuggled out from countries such as Rwanda and Uganda finds anxious buyers, especially in the U.S., Germany, Holland, Belgium, and Kazakhstan.

About three years ago, a handful of traders came to Vichada and Guainía to promote the exploitation of coltan near the Orinoco River and its tributaries. Mining of coltan is not regulated, and traders used false records to disguise the fact that some extraction sites are on Indian reservations. By the rivers and hillsides, traders collect the mineral, which is taken to Bogotá and sold. Some say traders pay a tax of $2,000–2,500 per ton to the Autodefensas Unidas de Colombia, (AUC) or to the rebel guerrillas in some coltan mining areas.

While Chavez has ordered militarization of Venezuela’s coltan area and declared it a national resource, authorities in Colombia just know theirs exists.

Meanwhile, in Venezuela, reserves of coltan and other strategic minerals were found south of the Orinoco River — in eastern Venezuela — as part of an aerial survey carried out with Iranian cooperation. Iranians, oh no, in Venezuela, what is that crazy Chavez up to now? Venezuelan Industries and Mining Minister Rodolfo Sanz didn’t reveal the amount of the coltan reserves spotted or their precise location, but added that diamond, phosphate, titanium, and lead deposits also were found.

Separately, Science and Technology Minister Jesse Chacon, who accompanied Sanz at a press conference on November 13. 2009, confirmed that important deposits of kaolinite have been found and are being developed with assistance from Russia. The Russians, too, ¡O dios mio! He said Russia will also provide technological assistance to treat Venezuela’s recently discovered uranium deposits. Chacon, who said uranium will be used for energy production “because oil will run out,” ruled out using the mineral for military purposes. Do I smell “weapons of mass destruction”?

There’s nothing particularly evil about coltan the substance itself, of course, it’s just this decade’s whale oil, and woe betide the cavorting cetaceans who might get in the way of the harpoons, as the corporate greed fest sends out its Ahabs. Venezuela, where there is not only oil in abundance but a new-found supply of coltan, is simply a bigger Moby Dick.

Forcible annexation of the Venezuelan people into corporate serfdom has therefore been marked onto PowerPoint agendas and is proceeding apace. Annoyingly, the Venezuelans are the difficult sort, and have yet to succumb to a pro-corporate dictator, at least for the past few years.

To make things worse, they’ve diverted some of the profits from the oil industry as it drains away their subsoil bonanza, and have bought tanks and planes. This means that a quick takeover by, say, Aegis, Executive Outcomes, or Xe is quite a bit more difficult; the coltan industry will have to get together with the oil industry, and hire the Big Dog to get the job done.

That’s Uncle Sam, of course, and though he is already drooling with bloodlust to crush the life out of those unprofitable humans there in Caracas, he can’t be properly unleashed without a lengthy and expensive propaganda campaign directing the U.S. population to snarl with hatred and fear at Venezuela.

That’s where you and I come in, and some of the cue-cards are already available, so let’s get cracking with our chants, to be delivered at every television-led Hate Minute:

Of course the pros will come out with shorter versions of these chants, as they currently have too many syllables for Fox news watchers. Have no doubt that it will be done, however, because we’re talking about oil and coltan, and that means profits. No, not profits for you, silly, profits for our betters, who have the sense to put those profits into Euros and gold and hide them in the Cayman Islands or the Lesser Antilles, brass plate operations generally. Otherwise they’d turn into tax money and the blood — I mean profit — would get spread around rather than properly piling up with the super-rich.

In Mérida, on Nov. 10, 2009, President Chavez declared that Venezuela is prepared to defend itself against an act of aggression from Colombia or the United States, countries which recently signed a military pact to allow the U.S. to use Colombian bases to increase its military and intelligence operations across Latin America.

[Colombia and the U.S. signed a military pact on October 30th to expand U.S. military presence at seven Colombian air, naval, and army bases, grant U.S. personnel diplomatic immunity for crimes they commit in Colombia, and facilitate the movement of the U.S. military throughout the country.]

Chavez called on commanders of the Venezuelan Armed Forces to “lose no time; we are going to form militias of revolutionary students, workers, women, everyone ready to defend this sacred homeland.

“Don’t make the mistake, President Obama, of ordering an overt aggression against Venezuela utilizing Colombia,” Chavez continued. “We are ready for anything, and Venezuela will never, never be a Yankee colony again.”

If the U.S. and Colombia start a war with Venezuela, he warned later on his weekly television talk show, “It would be the start of a hundred year war, and this war would extend across this entire continent.”

At the United Nations on Nov. 11, Colombia brought what it called threats of war from Venezuela to the Security Council. A letter to all members of the Security Council was seen as a move to gain U.N. approval for war on Venezuela. However, Chavez spoke of a defensive war, not invading Colombia. For months he has warned that a military pact between Bogotá and Washington could set the stage for a U.S. invasion of Venezuela from Colombia.

The U.S. and Colombia dismiss the charge, saying the pact will combat drug traffickers and Marxist insurgents in Colombia. Meanwhile, however, the U.S. is setting up the same armed drone capability that is currently bombing Afghanistan and Pakistan.

Recriminations have increased recently, with Colombia accusing Chavez of not helping combat drug-running rebels hiding on Venezuela’s side of the border and Chavez calling Colombia a lap-dog of the U.S. Empire.

2 Responses to Coltan in Venezuela : Chavez Putting Chips on War?