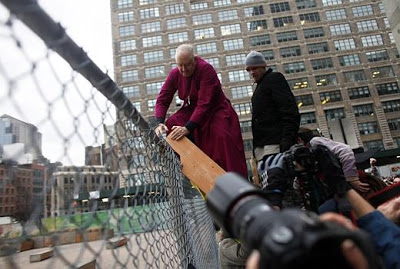 NEW YORK — This past Saturday marked the three-month anniversary of Occupy Wall Street. It was also Bradley Manning’s birthday. It was one of those days that confirmed the validity of the chant: “All Day, All Week, Occupy Wall Street.”

OK, maybe, it wasn’t a whole week but Saturday felt like a week in one day.

The plan for the day, as announced, was to gather at Duarte Park at Sixth Avenue and Canal Street to attempt a RE-Occupation of vacant land owned by Trinity Church, more of a real estate company than a house of worship.

For a few weeks, the Occupy Movement had been demanding that the Church allow the movement to take “sanctuary” on that land. There were earlier protests and even a hunger strike that made page one of The New York Times.

Police in riot gear had ousted the occupiers the last time they tried to take over the space a few weeks back, and, since then, there has been a rancorous standoff between a church that is supported by many fat cat one-percenters and OWS’s volunteer nonviolent army of outrage.

The Church has repeatedly turned the movement down, despite support for the OWS demands from many clergy in New York and the most famous Episcopal priest in the world, South Africa’s Desmond Tutu. (Tutu sent OWS a supportive message but, then later sent the church a disclaimer of any attempt on his part to sanction violence.)

No doubt church lawyers were expressing worries about financial liability should there be any claims, but many of their trustees had political objections. They are Wall Streeters, including, a Vice President of Brookfield Properties, the owner of the “public” Zuccotti Park that had been the Movement’s home until they were unceremoniously and violently ejected by police in the dark of night.

The gathering at Duarte Park was predictably surrounded by cops, some in riot gear, while what looked like the Zuccotti Park alumni Association roamed around on a sliver of a City Park next to the unholy Trinity site.

At least half of the crowd, which grew as the day progressed, appeared to be covering the other half with still or video cameras and tape recorders. The press was out in force too, no doubt hoping for a bloody confrontation. Pacifica Radio outlet WBAI was broadcasting live and its programming was played back to the crowd on boom boxes.

The librarians of the People’s Library were on hand with a few boxes of newly donated books, but, despite the rhetoric, the scene seemed tired except for those who were dancing around or looking for action.

A few activists and clergy were arrested for climbing over the fence while others tried, but failed, to knock it down. (There were more than 50 arrests Saturday,)

I was pretty discouraged by the relatively small turnout and the focus on getting to occupy a new tiny land base in an area with no real pedestrian traffic nearby, instead of finding more ways to reach out to mainstream America.

Saturday was a big Xmas Shopping day. While tens of thousands of New Yorkers were flocking to stores in Times and Herald Square. I thought that if you want to hit at economic power, you should be Occupying Macy’s or Toys”R”Us.

All the stores were putting on new sales after Black Friday turned out to be a relative bust. Why not a march by Occupy Santas?

It all seemed unpromising when announced concerts at the park by Lou Reed and others didn’t seem to materialize, or at least I missed them.

But I left too soon.

Unknown to me, the movement then launched a previously unscheduled march, but, at the last minute, changed its direction and headed uptown, catching the police unaware.

The Live Stream people went with them so what happened next was shown on the Internet. (One of the live-streamers was busted but kept his camera-computer going from inside a Police paddy wagon.)

At one point, I saw coverage by three cameras. One view, in ironic counterpoint, covered several cops defending the statue of the Bull on an empty Wall Street traffic junction. No one there was bullish. Bullshit anyone?

The cops attacked as the activists marched up Seventh Avenue at 29th Street, arresting some for marching when they should be walking, a crime that may soon by punishable by the crazed new NDAA measure treating the homeland as a battlefield.

The crowd then broke into smaller guerrilla-style groups, darting in and out of various streets, and ending up in a packed Times Square on a Saturday night at the height of the Christmas shopping season.

This march was spontaneous, powered by the element of surprise. The police actually chased some out-of-towners out of Times Square to try to cut them off at the pass, but failed.

Before the Men in Blue, led by Men in White, could reassert their version of Law and Order, and while shoppers and tourists watched, the occupiers began “mic-checking,” with individual after individual shouting out “Why I Occupy,” and offering personal statements and testimonies that were repeated several times.

This had to electrify whoever was watching. The passion and sincerity was there for all to see.

I watched the Live Stream of the event on a computer in Harlem and was moved, at some points, to tears by how articulate and reasonable they were. They later left the square and returned to Zuccotti Park for a late-night General Assembly meeting.

Not only was this the best show on Broadway for that hour, but it proved the correctness of a political claim, asserted in one of the OWS signs written after the police raided Zuccotti Park.

[News Dissector Danny Schechter is covering Occupy Wall Street in his News Dissector blog and and other websites including Al Jazeera. He has collected his reporting into a new book, available next week, with a preface by writer Greg Palast. Email Danny at dissector@mediachannel.org. Read more by Danny Schechter on The Rag Blog.]