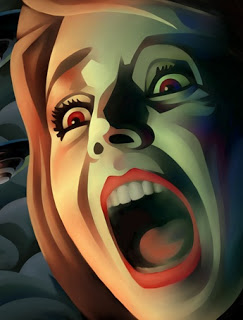 Time to be scared straight?
Dear Stephen King:
An open letter to one American who really
could scare the rest of us into action

I’ve been participating in an email discussion group that’s tackling urgent issues like population, climate change, and peak oil. There’s one particularly curmudgeonly member who persistently protests the doom and gloom vision members of the group generally share. Recently he suggested that we might as well just get Stephen King to write our posts because fear-mongering is his business and he’d take the doom and gloom up a notch. Which inspired me to write the following open letter to Stephen King.

Most of your books are too scary for me. They give me nightmares. Call me over-sensitive. But when my son was a teenager and I still lived in Maine (Stockton Springs, not far from you) he devoured your books. So I bought a batch of raffle tickets from the local library, partly to support a good cause but more than a little because a signed hardcover copy of your latest book (I think it was The Stand) was the drawing prize. When I won and gave him the book, for about a week he thought I was the best mom ever.

Well, he’s almost 35 now and along with a lot of other young Americans, he’s wondering what our generation was thinking all these years we didn’t notice we were spending down his only meaningful inheritances: a habitable planet, the company of congenial species and functioning ecosystems, and enough natural resources to get a living on in an economy that doesn’t devour its young.

Even though I edited a national small-farm magazine, wrote scads of articles about organic gardening, homesteaded, heated and cooked with wood, grew most of our veggies, raised some of our meat, put food by, composted, and recycled through the years of his childhood, I was still complicit in and beneficiary of the systems that thoughtful young people like my son now believe have robbed them blind and put their very lives at risk of being nasty, brutish, and short.

And despite my best intentions, I was complicit. We all are who have been fortunate enough to live the American Dream.

In my book, Life Rules (as in, “we don’t”) I write that “we’re stealing our present pleasures from tomorrow’s children.” It’s easier than taking candy from a baby. Like William Catton wrote in Overshoot back in 1982 — which apparently didn’t shake enough folks up because we’re still overshooting the planet’s capacity to support us, living as far beyond Earth’s means as many of us are living beyond our own — “Posterity doesn’t vote and doesn’t exert much influence in the market-place. So the living go on stealing from their descendants.”

The problem is that most Americans don’t realize that’s what they’re doing. They think they’re trying to grab hold of a better future for themselves and their kids and grandkids. They don’t realize that all that grabbing has dramatically reduced what they and their grandkids are going to be able to get. They haven’t caught on to the finite planet thing, the idea that on a finite planet, every resource except sunshine and other forms of radiation from outer space is either a one-shot deal — like fossil fuels, water, minerals and metals — or a timed-release one — like forests, fisheries, topsoil — that we haven’t been giving Life enough time to re-release.

They don’t get it that we can’t keep treating species like pop-up critters in a state fair shooting gallery and ecosystems like toilets and all-you-can-eat buffets. They’ve got it in their heads that some-magic-how, our population can keep growing and so can “the” economy, as if we had a whole bunch more Earth’s we could import stuff from when we run low (like we have now of cheap-easy oil, water, food, minerals, metals, and money) or move to when this one’s used up or its weather is havocked.

Now I know, Mr. King, that you’re familiar with the predicament we’re in, which is scarier even than the hot-housed version of some of our present quandaries you offered up in Under the Dome, which is saying a lot.

And I suspect you’re not any more thrilled than I am or millions of other Americans are with the bickering and dithering of our present crop of leaders who, if they’ve seen the handwriting on the wall — the pending end of Life as we know it if we keep trying to do business as usual — are as clueless about its meaning for them and for us as Babylon’s King Belshazzar was in the book of Daniel when that dead hand, like something right out of one of your stories, wrote mene, mene, tekel u-Pharsin on his palace wall.

And given that you’ve never quit the kindly, off-the-beaten-track, small-town, good-neighbors environs you were born in for the bright lights of a big city, I suspect you also know that where surviving creeping chaos, a critical mass of crises, and pending systemic collapse are concerned, small is not only beautiful but sustainable. And local is a lot more manageable — even when it comes to identifying and punishing the bad guys — than global or even national, whether we’re talking economies or governments. 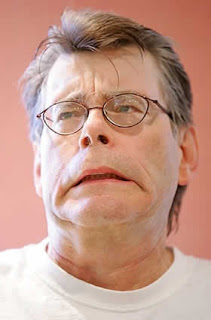 And it seems to me that, given your influence and the speed with which you can turn out a blockbuster, you might take my feeble attempt to point out the error of our ways, turn the truth of it into fiction and a few million Americans into Committees of Correspondence, planners of a new Declaration of Independence, this time from the global economy and the Powers that run it, and get the lion’s share of the benefit out of it.

So, here’s my contribution to your plot outline:

It’s 2011. The global economy, like any successful meme, has gone viral. It’s doing the same thing to the planet’s human and natural communities that HIV does to the human body. Really. Check this out. Point for point, the economy’s a dead ringer for the virus (pardon the pun).

In your page-turner, you could turn the viral economy into a virus that attacks the human brain, affecting people according to their adrenalin levels, making some more aggressive and self-interested and others merely more attracted to comfort, convenience, and consumption.

Of course the virus would mutate as it evolved and spread, turning off parts of the brain given to reason and clear perception of reality. You get my drift. As the virus got stronger, humans would become less intelligent and more susceptible to it.

You’d have no end of crises, villains, causes of death, and scenes of mayhem to work with. Bankrupt state and local economies, millions living in the streets of un-TARP-covered cities, killer storms and broke emergency management agencies, the unemployed and homeless wandering zombie-like in the streets, kudzu and ivy growing over Main Street, species going belly up everywhere you look, suicides, murders, thievery, empty store shelves, cars, and trains and planes stalled for lack of fuel, no more plastic anything, people dropping like flies for lack of food and medicine, money worth the paper it’s printed on, governments closed down, their staffs, lobbyists and legislators walking home (like that guy in Cold Mountain who walked home after the Civil War before there were cars and planes), brownouts and power grid failures, invasive species, mutated bacteria and pandemic MRSAs, mass migrations…

The end of Life as we know it has got to be the scariest story you’ve attempted, despite the fact that it’s coming true. And while we non-fiction hacks try desperately, book after book, post after post, and page after page to persuade the not-yet-converted that Americans need to get together and work together to take our future back before there’s nothing left worth taking back, you could pull it off in a thousand pages or less before the 2012 elections.

And you could even give it an uncharacteristic happy ending, where a critical mass of little American cities like Bangor, Maine, and neighborhoods in big cities like Seattle figure out how to ward off and survive the infection. Their leaders and people could become sort of like antibodies — that was Paul Hawken’s idea in Blessed Unrest — dedicated to healing, protecting, and providing for themselves and their natural support systems. And they could discover the joys of resourcefulness, resilience, reciprocity, recycling — and survival against the odds.

But, then, that wouldn’t be a very Stephen King ending, would it? You’ll come up with something better. And scarier. Feel free to take this plot line and run with it.

[Ellen LaConte, an independent scholar, organic gardener, gregarious recluse, and freelance writer living in the Yadkin River watershed of the Piedmont bioregion of North Carolina, is a contributing editor to Green Horizon Magazine and The Ecozoic. Her most recent book, the controversial Life Rules: Why so much is going wrong everywhere at once and how Life teaches us to fix it (Green Horizon/iUniverse, 2010), is available on order from bookstores and online booksellers. You can learn more about the book, read her recent posts, or sign up for her bimonthly online newsletter, Starting Point, at www.ellenlaconte.com. Read more by Ellen LaConte on The Rag Blog.]