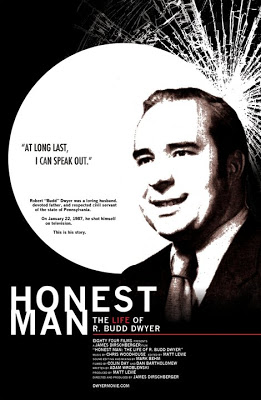 Looking for an ‘Honest Man’:
The self-destruction of R. Budd Dwyer

When Tom “The Hammer” DeLay, former Republican Majority Leader in the U.S. House, was sentenced to federal prison in January 2011, it recalled the story of Budd Dwyer. How indelibly written are the brutal images of the fateful day in 1987 when TV news stations across the country blared unedited footage of then scandal-plagued Pennsylvania Secretary of State Dwyer shooting himself in the head at a press conference.

It’s not too often that politicians play judge let alone jury and executioner — for themselves. Tom DeLay, take note.

Honest Man stirs up the dust on the Dwyer story at just the opportune moment. Although Dwyer’s self-destruction is an obscure tragic episode in the larger scheme of American political corruption, Honest Man succeeds in making him the everyman with whom you can empathize even if you cannot fully grant him the benefit of the doubt of his guilt.

A ring of scandals and faux scandals have wracked the highest reaches of the U.S. House of Representatives for the past few decades — taking down two speakers, two majority leaders, and countless rank and file just in the past decade. DeLay may be serving with some of them in prison.

Scandals abound at the state level as well, felling governors, legislators, and even judges, and most recently resulting in jail time in Dwyer’s own Pennsylvania for Democratic Party ballot tampering in an attempt to keep venerable public interest advocate Ralph Nader off the 2008 presidential ballot.

The film is a compelling and at times heart-wrenching story that artfully weaves together the narrative of Dwyer’s rise from public school teacher to Republican Party leader with national aspirations. With the film drawing from home movies, photographs, and clippings as well as interviews with his wife, children, sister — and friends and foes alike — Dwyer comes across as a likable if tragic figure.

Honest Man’s portrayal of Dwyer as having befriended a shadowy and untrustworthy businessman simplifies a convoluted state contracting kickback deal gone haywire in the context of his falling out with then Republican Governor Dick Thornburgh — without passing judgment.

I appreciated the open-ended recounting of the scandal since it provided context for what was at best misguided personal judgment and at worst a minor pig in a poke as far as scandals akin to the S&L bailout, Keating 5, Iran Contra, Blackwater, Halliburton, Vice President Cheney, torture memos, and the recent $13 trillion bank bailout go.

Throughout the film, the viewer is asked to sit in judgment of Dwyer’s tragic if not entirely unquestionable record. But by the end of Honest Man one has to wonder if the director, through skillful editing and artful storytelling, is really asking the audience to sit in judgment of our political system.

From Dwyer to DeLay, justice is not always on the menu when it’s most required to save our political system from caving in upon the weight of its own voracious greed and conflicts of interest.

1 Response to FILM / Robert Ovetz : Looking for an ‘Honest Man’