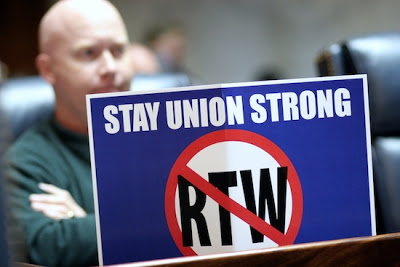 David Johnson, an organizer for the Sheet Metal Worker’s International Association, carries a sign during demonstration at the Indiana Statehouse. Image from NUVO.
Right to Work (for less) in Indiana:
The Super Bowl of anti-worker legislation

“The heart of the Super Bowl action will be in downtown Indianapolis at the three-block interactive fan environment known as Super Bowl Village. AFC and NFC fans, families, visitors and locals alike can enjoy this ultimate, free fan zone that spans from Bankers Life Fieldhouse all the way to the NFL Experience at the Indiana Convention Center via the newly redesigned Georgia Street.

WEST LAFAYETTE, Indiana — One hundred passionate activists from labor and occupy groups around the state of Indiana assembled at the State House on Saturday, January 28, to continue opposition to the pending “Right-to-Work-for-Less” bill which appears to be close to final endorsement by the legislature and Indiana Governor Mitch Daniels.

Ironically, Alcoa Corporation just announced the expansion of plant facilities in Lafayette, Indiana, prior to the passage of the odious anti-worker bill that Governor Daniels has claimed will bring more jobs to Indiana. A plant in Iowa, a Right-to-Work State, lost its bid for the Alcoa plant expansion to Indiana, not yet such a state.

Workers in the Lafayette plant are represented by United Steel Workers of America Local 115.

The Indiana House of Representatives last week voted 54-44 to endorse a Right-To-Work bill (several Republicans voted “no” with their Democratic colleagues). Now the bill returns to the Indiana Senate for discussion of amendments to the bill and final passage before it goes to the desk of the Governor for his signature. Despite the fact that he had promised labor in the past that he would not support such a bill, the Governor made it his top priority item in the 2012 legislative session.

The intense political battle over RTW has occurred in the context of enormous celebration of the impending arrival of 150,000 NFL fans to the Super Bowl which will be played in Indianapolis on Sunday, February 5. Indianapolis big money interests have been lobbying for this event for years, hoping to put the city on the map for hosting huge money-making events such as the football classic.

Two buses of RTW protesters traveled from Lafayette, Indiana, and Purdue University, 65 miles away, to the rally. After spirited speeches, including remarks from three state legislators, representatives from building trades unions, students, and professors, rally organizers led a march through the Super Bowl village in downtown Indianapolis. Marchers were seen by thousands of Super Bowl celebrants who were roaming around the village spending money in dozens of food and entertainment venues.

Demonstrators encountered some hostile reactions, including physical jostling, but also numerous thumbs up and clenched fists in support of protestors carrying placards demanding “Kill the Bill,” “Workers United Will Prevail,” and “Occupy Purdue.”

Opposition to Right-to-Work has a decade-long history around the state since the governorship and the Indiana House of Representatives has shifted from Republican to Democrat and then Republican control. The Republicans, for their part, are committed to destroying the labor movement not only to reduce labor costs but also to end political opposition to their domination of state government.

Among the responses has been the Indiana Coalition for Worker Rights initiated by the Northwest Central Labor Council, AFL-CIO, in 2006, “to educate and mobilize workers to demand and defend worker rights.” It pledged itself to:

In the summer of 2011, a coalition representing various progressive groups in the Greater Lafayette community formed to work on reproductive health care, civil liberties, peace, and labor rights. The new organization, the Indiana Rebuild the American Dream Coalition, held jobs and justice rallies in downtown Lafayette in November.

Parallel to these developments the Tippecanoe Building and Construction Trades AFL-CIO and Occupy Purdue and Occupy Lafayette have mobilized around Right to Work and a whole range of issues that concern the 99 per cent.

It is clear from the experiences of small communities such as those in Tippecanoe County (Lafayette and West Lafayette are the population centers) and various other communities all across Indiana that so-called “outside” and “inside” strategies are needed to fight back against the draconian efforts to destroy worker rights, to promote acceptable living conditions for all, and to begin to create a better world.

Outside strategies include mass mobilizations, protests, educational forums, and dramatic public displays of peoples’ views in venues such as the Super Bowl celebrations.

Jim Ogden, Lafayette, union electrician from IBEW Local 668, articulated a strategy of how best to connect the mass mobilizations to electoral work, a so-called “inside strategy”:

We realize that at this point where it’s at in the legislation. We probably will not stop this.

At this point, I think we’re looking at this as a kickoff for the elections in November. And trying to do whatever we can to get the Republicans that had voted for this, to get them out of office. (Journal and Courier, January 29, 2012)

It is clear that the electoral process cannot alone defend workers rights. However, in the context of the immediate needs of the 99 percent, elections, in conjunction with massive public expressions of protest, must constitute a critical component of the work of progressives in the months ahead.