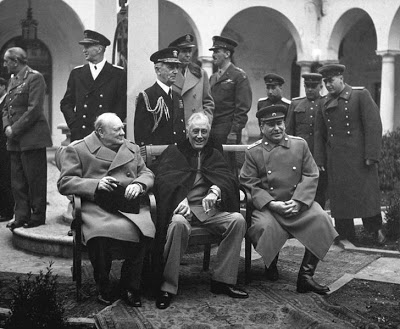 Leaders of the three states celebrated a post-war world order in which they would work through the new United Nations system to modulate conflict in the world.

During World War II an “unnatural alliance” was created between the United States, Great Britain, and the former Soviet Union. What brought the three countries together — the emerging imperial giant, the declining capitalist power, and the first socialist state — was the shared need to defeat fascism in Europe.

Rhetorically, the high point of collaboration was reflected in the agreements made at the Yalta Conference, in February 1945, three months before the German armies were defeated.

At Yalta, the great powers made decisions to facilitate democratization of former Nazi regimes in Eastern Europe, a “temporary” division of Germany for occupation purposes, and a schedule of future Soviet participation in the ongoing war against Japan.

Leaders of the three states returned to their respective countries celebrating the “spirit of Yalta,” what would be a post-war world order in which they would work through the new United Nations system to modulate conflict in the world.

Within two years, after conflicts over Iran with the Soviet Union, the Greek Civil War, the replacement of wartime President Franklin Roosevelt with Harry Truman, and growing challenges to corporate rule in the United States by militant labor, Truman declared in March, 1947 that the United States and its allies were going to be engaged in a long-term struggle against the forces of “International Communism.”

The post-war vision of cooperation was reframed as a struggle of the “free world” against “tyranny.”

In addition to Truman’s ideological crusade, his administration launched an economic program to rebuild parts of Europe, particularly what would become West Germany, as capitalist bastions against the ongoing popularity of Communist parties throughout the region.

Along with the significant program of reconstructing capitalism in Europe and linking it by trade, investment, finance, and debt to the United States, the U.S. with its new allies constructed a military alliance that would be ready to fight the Cold War against International Communism.

Representatives of Western European countries met in Brussels in 1948 to establish a program of common defense and one year later with the addition of the United States and Canada, the North Atlantic Treaty Organization (NATO) was formed. The new NATO charter, inspired largely by a prior Western Hemisphere alliance, the Rio Pact (1947), proclaimed that “an armed attack against one or more of them… shall be considered an attack against them all…” which would lead to an appropriate response.

The Charter called for cooperation and military preparedness among the 12 signatories. After the Soviet Union detonated its first atomic bomb and the Korean War started, NATO pushed ahead with the development of a common military command structure with General Eisenhower as the first “Supreme Allied Commander.”

After the founding of NATO and its establishment as a military arm of the West, the Truman administration adopted the policy recommendations in National Security Council Document 68 (NSC 68) in 1950 which declared that military spending for the indefinite future would be the number one priority of every presidential administration.

As Western European economies reconstructed, Marshall Plan aid programs were shut down and military assistance to Europe was launched. Greece and Turkey joined NATO in 1952, and, fueling the flames of Cold War, West Germany was admitted to NATO in 1955. (This stimulated the Soviet Union to construct its own alliance system, the Warsaw Pact, with countries from Eastern Europe.)

During the Cold War NATO continued as the only unified Western military command structure against the “Soviet threat.”While forces and funds only represented a portion of the U.S. global military presence, the alliance constituted a “trip wire” signifying to the Soviets that any attack on targets in Western Europe would set off World War III. NATO thus provided the deterrent threat of “massive retaliation” in the face of first-strike attack.

In the next 20 years after the Soviet collapse, membership in the alliance doubled. New members included most of the former Warsaw Pact countries. The functions and activities of NATO were redefined.

NATO programs included air surveillance during the crises accompanying the Gulf War and the disintegration of the former Yugoslavia. In 1995, NATO sent 60,000 troops to Bosnia and in 1998-99 it carried out brutal bombing campaigns in Serbia with 38,000 sorties. NATO forces became part of the U.S.-led military coalition that launched the war on Afghanistan in 2001. In 2011 a massive NATO air war on Libya played a critical role in the overthrow of the Gaddafi regime.

An official history of NATO described the changes in its mission: “In 1991 as in 1949, NATO was to be the foundation stone for a larger, pan-European security architecture.” The post-Cold War mission of NATO combines “military might, diplomacy, and post-conflict stabilization.”

The NATO history boldly concludes that the alliance was founded on defense in the 1950s and détente with the Soviet Union in the 1960s. With the collapse of Communism in the 1990s it became a “tool for the stabilization of Eastern Europe and Central Asia through incorporation of new Partners and Allies.”

The 21st century vision of NATO has expanded further: “extending peace through the strategic projection of security.” This new mission, the history said, was forced upon NATO because of the failure of nation-states and extremism.

Reviewing this brief history of NATO, observers can reasonably draw different conclusions about NATO’s role in the world than from those who celebrate its world role.

First, NATO’s mission to defend Europe from aggression against “International Communism” was completed with the “fall of Communism.” Second, the alliance was regional, that is pertaining to Europe and North America, and now it is global. Third, NATO was about security and defense. Now it is about global transformation.

Fourth, as its biggest supporter in terms of troops, supplies and budget (22-25%), NATO is an instrument of United States foreign policy. Fifth, as a creation of Europe and North America, it has become an enforcer of the interests of member countries against, what Vijay Prashad calls, the “darker nations” of Asia, Africa, and the Middle East. Sixth, NATO has become the 21st century military instrumentality of global imperialism.

And finally, there is growing evidence that larger and larger portions of the world’s people have begun to stand up against NATO.