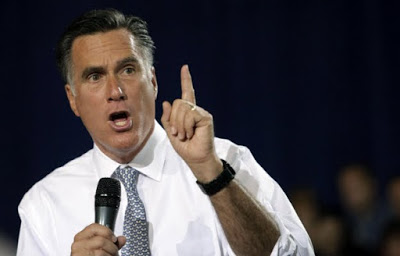 Will the real Mitt Romney please stand up? Image from Foreign Policy.
Unleashing the military:
The real Romney foreign policy

Military spending would grow in a Romney administration, especially because of ties to the neocons and a hawkish Congress which promotes military spending district by district.

After the outbreak of fighting on the Korean peninsula, NSC 68 was accepted throughout the government as the foundation of American foreign policy — U.S. Department of State, Office of the Historian.

The third and last presidential debate of the 2012 election season, October 22, 2012, addressed issues of foreign policy and their connections to the United States economy. The debates reflected the idiosyncrasies of American politics, 2012, as well as the enduring features of the United States empire.

As to the candidate’s realization that he needed to “move to the center,” Mitt Romney tried to portray himself as peace-oriented. This approach contradicted the neo-conservative vision of the 17 of 24 key foreign policy aides advising him. These former Bush advisors and associates of the Project for a New American Century or (PNAC), stand for a foreign policy designed to reestablish United States global hegemony.

PNAC, formed in the 1990s, in its official positions argued that the United States, as the last remaining super power, must use that power to remake the world. The PNAC vision combines the ideology of the United States as the “City on the Hill” and the “Beacon of Hope” for the world, with the advocacy of using overwhelming military force to achieve imperial goals.

Romney, contrary to prior statements, endorsed the Obama administration plans for withdrawal from Afghanistan in 2014. He, like President Obama, supported the Syrian opposition short of U.S. direct military intervention. He called for maintaining sanctions against Iran to force the latter to end its alleged nuclear program while avoiding war. And Romney, like Obama, endorsed challenging China’s trade policy while engaging in constructive diplomacy with the burgeoning new superpower.

These and other Romney statements mirrored (for better or worse) the foreign policies of President Obama. The flexible Republican candidate “moved to the center” on foreign policy because of his perceived need to present an image of wisdom and caution to the America voters who oppose a continued presence in Afghanistan, getting directly involved in wars against Syria and Iran, and the wars on “terrorism,” “drugs,” and other crusades.

However, candidate Romney was firm in his commitment to increasing U.S. defense spending over the next decade, while he would cut domestic programs. The Center for Budget and Policy Priorities reported in September 2012 that a President Romney would cap total federal spending at 20 percent of GDP by 2016, maintain defense spending at 4 percent of GDP, and rapidly repeal the Affordable Care Act (Richard Kogan and Paul N. Van de Water, “Romney Budget Proposals Would Necessitate Very Large Cuts in Medicaid, Education, Health Research and Other Programs”).

President Obama claims that the Romney military project would add $2 trillion to military spending over the next decade. Even though figures are loosely introduced to debates, it is clear that a Romney presidency would add enormously to naval programs, maintain high levels of troops, and continue drone programs that were expanded during the Obama presidency.

The Obama defense budget projected for fiscal year 2013 would total $525 billion, a 2.5 percent decline from the 2012 budget (if inflation is considered). The basic DOD budget request does not include ongoing war costs, U.S. nuclear weapons systems, homeland security, military assistance, or other elements of security.

The DOD recommended cuts in troop strength in the army, marines, and reserves. The National Priorities Project reports that an Obama defense budget would modestly increase from about $525 billion in 2013 to just less than $530 billion at the end of a second term.

A Romney administration would unleash the military in terms of expenditures, and, if he listens to his neocon advisors, worldwide adventures. But, President Obama’s defense budget proposals continue the basic parameters of military spending into the future. As the National Priorities pie chart notes, the 2013 proposed federal budget allocates 57 percent of discretionary spending directly to the military, with 6 percent for education, 6 percent for housing and community, 5 percent for veterans benefits, 3 percent for science, 2 percent for labor, 2 percent for transportation, and 1 percent for food and agriculture.

National Security Council Document 68, written in the bleak Cold War winter of 1950 before the onset of the Korean War recommended that military spending should be the number one priority of every president before he/she discussed any other program or activity of government. NSC 68, just a wild proposal that winter, became policy after the Korean War started and has for the most part continued ever since, costing American workers trillions of dollars in taxes.

The Romney proposal, based on a vision of reestablishing the United States as the global hegemonic power, is based on the principle articulated in NSC 68. Spend more and more on the military and pay for it by cutting everything else. The Obama budget, while more circumspect and committed to the military contributing “their fair share” to the health and well-being of the nation, maintains the same commitment to prioritizing the military.

The task of the peace movement over the coming weeks is to first challenge the candidacy of Mitt Romney, who is committed to reinstituting the principle of NSC 68, and then, if the President is re-elected, to demand that President Obama reject the 60-year tradition of privileging unnecessary military spending over the basic needs of the American people.