Heidi Turpin : Peace for the People of… 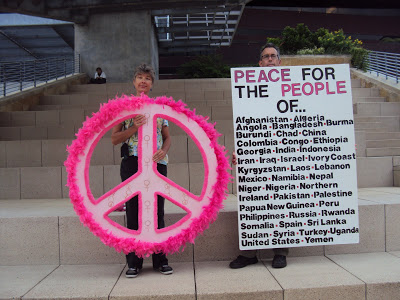 AUSTIN — “Neither rain, nor snow, nor sleet, nor hail…” an expression that doesn’t just apply to postal workers anymore. This Tuesday, September 21st — a stormy day in Austin — was the International Day of Peace established by the United Nations in 1982 as a global holiday when individuals, communities, nations, and governments highlight efforts to end conflict and promote peace.

At a time when our own government is occupying Iraq and Afghanistan, drone bombing the people of Pakistan, and supplying weapons to Israel for its war on the Palestinian people, CodePink Austin stood outside of City Hall, during an afternoon downpour, sending a hopeful message that peace is possible.

A sign standing five feet tall simply stated “Peace for the People of…” and included names of countries involved in armed conflict around the world. Sadly, there was barely room to include the 43 countries currently affected. A peace symbol, five feet in diameter and surrounded by feathers stood as a bright spot on an otherwise dreary afternoon. Many passersby showed their appreciation with honks and peace signs. Rain doesn’t seem to dampen the desire for peace!

1 Response to Heidi Turpin : Peace for the People of…