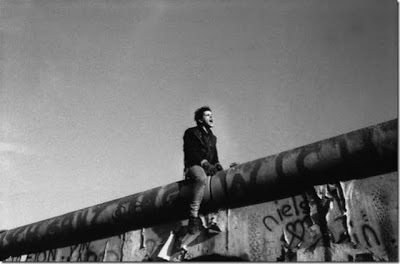 …you are Americans and are meant to carry liberty and justice and the principles of humanity wherever you go, go out and sell goods that will make the world more comfortable and more happy, and convert them to the principles of America.

There are two great evils at work in the world today, Absolutism, the power of which is waning, Bolshevism, the power of which is increasing. We have seen the hideous consequences of Bolshevik rule in Russia, and we know that the doctrine is spreading westward. The possibility of proletarian despotism over Central Europe is terrible to contemplate.

— Secretary of State Robert Lansing shortly after the Russian Revolution in Stavrianos, 494.

Daniel Barenboim, who was in town the night the Berlin Wall came down in 1989,” … said that “the fall of the wall ‘has changed so much of Europe for the better,’ Barenboim said in an interview at the Berlin Staatsoper, where he is chief conductor. ‘It has given so many thousands, probably millions of people, a better existence’

Reflections on the anniversary of the tearing down of the Berlin Wall in 1989 should stimulate a reexamination of the pain and suffering of the twentieth century.

It was a century in which over 100 million died in wars all around the globe (60 million alone in the two World Wars). Nazis killed six million Jews and six million others in Europe: liberals, communists, gays, opponents of genocide of every persuasion. And, during the Cold War years (1945 to 1991) approximately six million Vietnamese and Korean peoples died in wars and hundreds of thousands in Central Europe, Latin American, and South Asia.

The great revolutions of the twentieth century promised a different outcome for humankind: peace, justice, and democracy. Perhaps the biggest disappointment, the gap between the dream and the practice, resulted from the failures of the former Soviet Union. Masses of its citizens died in campaigns to collectivize agriculture and the purge of dissidents.

The regime developed an omnipresent dictatorship and following the revelations about Stalinism evolved into an autocratic state driven by top down bureaucracy. In addition, the Soviet Union would not tolerate political independence from the Socialist states of Eastern Europe, invading both Hungary and Czechoslovakia to crush reform movements. So from this vantage point, the tearing down of the Berlin Wall was cause for celebration.

But history is complicated

However, as the sentiments of President Wilson and his Secretary of State suggest, the United States as superpower emerged from World War I to embark on a global campaign to crush the new Soviet Union economically. As we know, the United States, along with a dozen other nations sent troops into the Soviet Union to help counter-revolutionaries overthrow the new Bolshevik regime.

In subsequent years, until 1933, the United States refused to recognize the Soviet Union. Western powers watched as Germany rearmed and expanded its control across the heartland of Europe. Italian fascist armies and German airpower were used to destroy democratic Spain, again with the United States and the British on the sidelines.

After the war, the Truman Administration launched a “cold war,” against the Soviet Union. It transferred resources to Western Europe to rebuild the capitalist part of it. It unleashed covert operators to infiltrate trade unions and political parties in Europe and Latin America and began beaming propaganda and sending operatives into Eastern Europe to undermine Soviet influence.

Germany was the centerpiece of this new global struggle. As the source of military forces that killed 27 million Soviet citizens in World War II, the status of Germany became most critical to the Soviets. And for the United States a reindustrialized, remilitarized Germany would constitute the centerpiece of the campaign to fight Communism and promote capitalism on the world stage.

Ironically, the Cold War started over Germany and could have ended there with a mutually derived agreement to create a neutralized and united Germany (much as was agreed to in Austria). But western diplomats ignored Soviet offers to negotiate the creation of such a Germany.

Without revisiting all the critical points of contestation between the East and the West, it is important to make clear that the Soviet Union, the weaker of the two “superpowers,” was targeted for challenge and defeat by every United States administration from 1917 to 1991. This cost both countries and their allies trillions of dollars in military spending and millions of lives.

The Soviet Union had something to do with social change

There were some positive developments during the Cold War years for which the Soviet Union may have made a contribution.

In 1945 most of Africa was still living under the yoke of colonialism. The British, French, Dutch and others still controlled territories and peoples in Asia. The Chinese were mired in a violent civil war. And all of Latin America was “in the backyard” of the United States. Within thirty years all this had changed. Africa achieved its independence, the Communist movement came to power in China, Indochina was freed from French and then American colonialism, and the Cuban revolution provided a beacon of hope for peoples living in the Western Hemisphere.

What if the Soviet Union had not collapsed?

First, the Gulf War might not have occurred in the way it did, (While the Soviet Union did collaborate with President George Herbert Walker Bush in the fall, 1990, on Gulf War policy, the collaboration was from a position of considerable marginalization). For sure, the Soviet Union would have waged a propaganda war against the U.S. military operation and the economic embargo of Iraq and bombing campaigns that continued throughout the 1990s and, particularly, the second war on Iraq in 2003.

Probably, in the bipolar world of the Cold War, the United States would not have been able to launch a war on Afghanistan and continue it for eight years.

And what about the global economy? Neoliberal globalization, initiated in the 1980s but expanded to every corner of the globe in the 1990s, would have been checked by Soviet influence and arguments about overweening reliance on the “free market.” The mal-distribution of wealth and income might not have been as grotesque as it has become if there had been a Soviet Union critiquing International Monetary Fund and World Bank policies.

Without exaggerating the influence or good intentions of a surviving Soviet Union, I would argue that the world since 1991 might have been different; particularly given the hundreds of thousands who have died in war since 1991 and the devastating impacts of growing economic inequality.

And back to Germany

Bruni de la Motte in the Guardian, Nov. 8, 2009, reported that the collapse of the former German Democratic Republic and its integration into West Germany led to social breakdown of society, widespread unemployment, “crass materialism,” the privatization of public enterprises, farms and forests, and two million lost homes. Hundreds of thousands of professional workers including teachers and professors lost their jobs and were blacklisted because they had been credentialed in the old regime.

There is no question, as one U.S. trade unionist once said to me, the former Soviet Union and the GDR were not “workers’ paradises” but they provided basic economic security to workers. That has long since been lost most places around the world.

It is a common place now to repeat the old adage: “History is written by the winners.” Old adage or not, the celebration of the twentieth anniversary of the tearing down of the Berlin Wall is being orchestrated by the same kinds of imperial voices that have been raised for almost one hundred years now.

As contentious as it might be, it is time for progressives to revisit the history of the Cold War in a way that is not chauvinistic and self-serving and does not justify current and future wars.

1 Response to History as Politics : Remembering the Berlin Wall