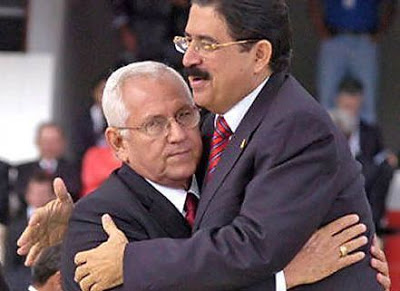 At the end of the meetings on July 19, [Costa Rican President Óscar] Arias asked for another 72 hours to work on ending the conflict by negotiation to avoid a bloodier resolution.

The second round of talks on the political crisis in Honduras, like the first, has ended in a deadlock.

Meeting in San José, Costa Rica on Saturday and Sunday, July 18 and 19, a week after the first effort, representatives of deposed President Manuel Zelaya and de facto President Roberto Micheletti failed for the second time to agree on Zelaya’s return to Honduras and on the restoration of constitutional government.

The major point of disagreement concerned the first of seven proposals offered by Costa Rican President Óscar Arias calling for Zelaya to be returned to the presidency and to serve out his term, which will end next January 27. The golpista government has consistently refused to consider Zelaya’s reinstatement and Zelaya’s supporters have insisted his reinstatement is not negotiable.

In an arrangement made by U.S. Secretary of State Hillary Clinton, Arias acted as mediator between the two sides during both rounds of meetings.

Other points in Arias’ proposal included the establishment of a government of national reconciliation composed of representatives of the major political parties; general amnesty for all crimes committed in connection with the crisis; Zelaya’s renunciation of any effort to hold a popular referendum in a manner not specifically authorized by the constitution; moving the next national elections from November 29 to October 25 and changing the dates for campaigns accordingly; placing the armed forces under the command of the electoral tribunal a month before the elections; and formation of a committee of respected Hondurans and members of international bodies like the Organization of American States to insure the fulfillment of the terms of agreement.

Counterproposals offered by the de facto government differed primarily in calling for Zelaya to be tried for his alleged crimes against the constitution upon his return to Honduras. They also called for formation of a truth commission to investigate alleged corruption in the Zelaya government. 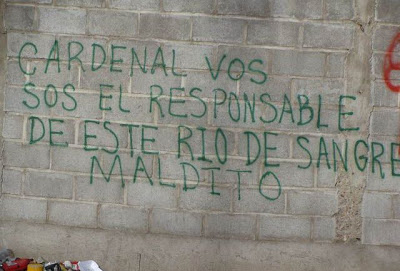 Graffiti: ‘Cardinal, you are the one responsible for this blood bath.” Photo by Minga Informativa de Movimientos Sociales.

At the end of the meetings on July 19, Arias asked for another 72 hours to work on ending the conflict by negotiation to avoid a bloodier resolution. Arias pointed out that Honduran civilians and military alike have weapons. Hugo Chávez had warned of civil war if Zelaya were not reinstated. On July 14, Bastille Day, Zelaya had urged his supporters to practice their constitutional right to mount an insurrection to bring about his return to the presidency, thus following the example of the French revolutionaries. He called for peaceful demonstrations and civil disobedience.

After his first attempt to return to Honduras by air on July 5 was defeated by the military, Zelaya pledged to return by other means, suggesting he would cross the border from Nicaragua to a secret location.

Several sources have reported that at the first meetings in San José, on July 9 and 10, Micheletti was represented not by the four attendees stipulated in the original plan but by six. The additional two were Bennett Ratcliff, a public relations specialist and lobbyist from San Diego, and his interpreter. Ratcliff is said to be friends with the Clintons and to have worked for Bill Clinton.

Venezuelan-U.S. journalist Eva Golinger writes that during the meetings Ratcliff was consulted on every point by the Micheletti team and that he supplied the list of conditions for negotiation which, she says, had been approved beforehand by Secretary Clinton. The conditions were that Zelaya could return to the presidency but not to power, acting as a mere figurehead; that he could not pursue plans to rewrite the constitution; that he must distance himself from Hugo Chávez; that he must govern jointly with the legislature and the coup regime; and that he must grant amnesty to those involved in the coup.

Another associate of the Clintons, Lanny Davis, has been hired by the Honduran branch of the rightist business group Consejo Empresarial de América Latina to lobby for the coup regime. In an appearance before the Western Hemisphere Subcommittee of the House of Representatives on July 10 he claimed that “democracy and civil liberties are flourishing in Honduras.” Davis attended Yale Law School with the Clintons and was special counsel to Bill Clinton during his presidency. He was prominent in Hillary Clinton’s presidential campaign.

Honduran activists have charged that rightist Cubans and Venezuelans in exile were involved in planning the coup. Robert Carmona-Borjas, a Venezuelan lawyer living in exile in the United States since his involvement in the coup of 2002 that briefly deposed Hugo Chávez, was thanked publicly at a pro-coup rally in Tegucigalpa shortly after Zelaya’s ouster and may in fact have been in attendance. Carmona-Borjas is co-founder of the Arcadia Foundation, a U.S.-based group claiming to be dedicated to eradicating corruption throughout Latin America but whose only specific known projects involve Hondutel, the state-owned Honduran telephone system that pro-coup Hondurans charge is run by corrupt associates of Zelaya. There has been talk of privatizing Hondutel.

Listed on the Arcadia web site until last September was the name of Otto Reich, the Cuban-born former undersecretary of state and ambassador to Venezuela who was involved in the Iran-Contra affair of the ‘80s. In a July 9 op-ed in the Miami Herald, Reich denied persistent rumors of his involvement in the Honduran coup. 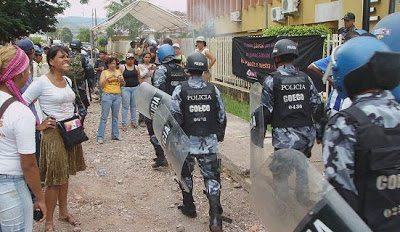 In the meantime, the most ardently pro-coup newspaper of Honduras, El Heraldo, claims to have discovered a plot led by Hugo Chávez to destabilize the country through acts of sabotage and vandalism, to be carried out by Nicaraguans and by Honduran drug traffickers and gang members. The plot would include occupation of the country’s largest airport and the assassinations of leading political figures. The conspirators, El Heraldo says, would block all major thoroughfares, force hospitals to close and provoke widespread bloodshed and massacres by firing on demonstrators, blaming the deaths on the police and military.

Assassinations and clamp down on press

Repression against the opponents of the coup has intensified. In a preliminary report issued on July 15, the Comité de Familiares de Detenidos y Desaparecidos en Honduras (COFADEH –- the Committee of Families of the Detained and Disappeared in Honduras) said that the coup had resulted in 1046 arrests, most of them on charges of creating “escándalo público>,” or public disturbance, the charge traditionally lodged against demonstrators. It reported that 59 people had been beaten by the police or the military and three had been assassinated. The report charged that Battalion 316, the most notorious of Honduran death squads of the ‘80s, had been reactivated. It said the situation in the department, or state, of Colón was particularly serious, with many arrests, including the detention of minors and at least one U.S. citizen. 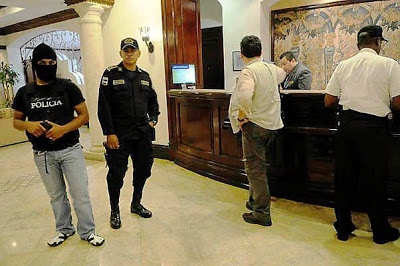 Police at hotel in Tegucigalpa looking for foreign journalists. Photo by Raices, El Salvador.
The organization deplored the widespread persecution of the press and attacks on the freedom of information. A large number of Honduran journalists have been jailed and journalists with Telesur, a multinational satellite television news service, and Venezolana de Televisión have been harassed, detained and finally expelled from the country.

The report cited the case of José David Murillo Sánchez, whose 19-year-old son, Isis Obed Murillo, was shot to death at the Toncontín airport on July 5, the first death in demonstrations against the coup. Murillo, the father, was arrested as he left the COFADEH office on July 9 on charges dating from 2004. He had earlier talked with the prosecutor’s office and with Telesur about his son’s death. He is reportedly being held in isolation in a three-meter by three-meter cell.

In incidents widely thought to be political assassinations, two prominent members of the leftist Unificación Democrática party were shot to death on July 11. That afternoon Ramón García was pulled from a bus in the western department of Santa Barbara and killed, and later in the evening Roger Iván Bados was shot to death at his home near the northern city of San Pedro Sula. Both men were active in organizing demonstrations against the coup.

Activism against the coup continues unabated, however. In an effort to slow commerce, major highways are being blocked, with unions in Nicaragua, El Salvador and Guatemala showing solidarity by blocking highways to and from Honduras on their sides of the border.

And several women’s organizations working together as Resistencia Feminista surrounded the headquarters of the Instituto Nacional de la Mujer (INAM) in Tegucigalpa on July 14 and 15 to protest the replacement of the director with a supporter of the coup. “This is a peaceful occupation of INAM,” said Gilda Rivera of the Centro de Derechos de las Mujeres, “as repudiation of the appointment of María Martha Díaz as minister. Our position as a women’s movement is that we won’t accept any official named by this usurping, fascist, golpista regime.”