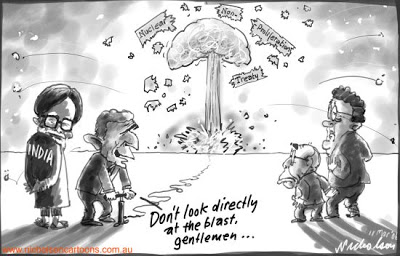 This week a select group of countries, Canada among them, will vote on a proposed nuclear deal between the U.S. and India that could lead to the further spread of nuclear weapons. With limited attention paid to this issue at home, indications are that Canada may be on the verge of making a grave mistake by supporting this deal. But this doesn’t have to be the case.

If Canada were to courageously stand against this deal, it wouldn’t be alone. Austria, Ireland, Japan, Netherlands, New Zealand, Norway and Switzerland all expressed concern last month.

Today and tomorrow, the 45 members of the Nuclear Suppliers Group – the alliance of countries that seeks to control trade in “dual-use” nuclear fuel, materials and technology – will be asked to consider the Bush administration’s proposal to exempt India from having to join the Non-Proliferation Treaty (NPT) as a condition of receiving nuclear technology and fuel.

The NPT is signed by 189 countries and has three key pillars: non-proliferation, disarmament and peaceful uses of nuclear energy. To be implemented, the U.S.-India nuclear deal requires approval by the Indian parliament, the International Atomic Energy Agency (IAEA), the Nuclear Suppliers Group and the U.S. Congress.

So far, India and the IAEA have approved it.

If the U.S. wins exemption for India, the deal would be a non-proliferation disaster. It would be a Bush legacy the world could do without. The deal will lead to greater nuclear proliferation.

Treaties like the NPT, meant to prevent the spread of nuclear weapons, have been unravelling. There are four nuclear weapons states that do not belong to the NPT: India, Pakistan, Israel and North Korea – the first state to actually quit the NPT while announcing its intention to develop nuclear weapons. Negotiations are still ongoing on compensating North Korea for agreeing to relinquish its nuclear weapons program.

Supporters of the U.S.-India nuclear deal argue that this bilateral agreement will help thwart the spread of nuclear weapons because it places 14 of India’s 22 reactors under IAEA monitoring. However, this deal allows India to continue thumbing its nose at the only legal, multilateral non-proliferation treaty the globe has, since it will not require India to join the NPT.

Additionally, unlike 178 other countries, India has not signed the Comprehensive Test Ban Treaty prohibiting the testing of nuclear weapons, and continues to produce reactor grade material and expand its nuclear arsenal via the remaining reactors not available to the IAEA for inspection. In fact, the deal guarantees India an uninterrupted supply of fuel without obligating it to sign the test ban treaty.

Organizations and experts, including the Rideau Institute, are raising the alarm. An Aug. 15 letter sent to all 45 foreign ministers of the Nuclear Suppliers Group, including David Emerson, by more than 150 NGOs and experts from 24 countries, noted that, “this deal, if approved, would give India rights and privileges of civil nuclear trade that have been reserved only for members in good standing under the NPT. It creates a dangerous distinction between `good’ proliferators and `bad’ proliferators and sends out misleading signals to the international community with regard to NPT norms.”

This special deal for India has not gone unnoticed by its rivals, Pakistan and China.

Adding fuel to the fire, Iran, which is a member of the NPT – unlike India – points to the deal as an example of the dangerous “good-bad” double standard. It is livid at the hypocrisy, pointing out that Israel is probably quietly lobbying for its own special deal. Iran has a right to have a civil nuclear program, but there are ample reasons to distrust its intentions. The U.S.-India nuclear deal does make a diplomatic solution even more difficult to achieve.

Iran’s ambassador to the United Nations in Vienna, Ali Asghar Soltanieh, cautioned that, “There is serious concern that the United States has taken this step with the intention to create a precedent and pave the way for Israel to continue its clandestine [nuclear] weapons activities.” In other words, the U.S.-India deal will embolden other countries to undermine the NPT as well. And with the 2010 review conference of the NPT looming, there is much at skate.

Canada has options. This week at the Nuclear Suppliers Group meeting, Canada could coalesce with Austria, Ireland, Japan, Netherlands, New Zealand, Norway and Switzerland, and demand that India signs two treaties – the Fissile Materials Cut-off Treaty, which stipulates that India halt production of reactor grade material, and the Comprehensive Test Ban Treaty – as a precondition for their support of the U.S.-India deal. Who knows, other countries may also be emboldened to stand up and say this is a bad deal with awful consequences. No one country has to be alone in standing up to George Bush.

Alternatively, these countries could ask for more time to study the proposed exemption. Such a delay would spell the end of the deal because the U.S. Congress cannot consider and vote on the deal until the Nuclear Suppliers Group approves it. If this agreement doesn’t land back in Washington by late September, it could not be approved during the remaining lifespan of Bush’s administration, effectively killing the deal.

However, if Canada were to support the U.S. on this deal, it would be abandoning its long-standing position as a strong supporter of nuclear non-proliferation, and instead, be supporting Bush’s legacy of undermining the most effective mechanism we have to avoid the spread of nuclear weapons in the world.

Anthony Salloum is the program director of the Rideau Institute, which serves as the global secretariat to Abolition 2000, a network of more than 2,000 organizations working for a global treaty to eliminate nuclear weapons.

This entry was posted in RagBlog and tagged India, Nuclear Weapons, U.S. Government. Bookmark the permalink.