The forerunner of all rock-formatted radio stations to follow in the Texas marketplace, independently owned KFMK-FM promoted itself as “Mother Radio,” and targeted Houston’s burgeoning baby boomer counterculture in the late-1960s.

“We were starving for music and information back then,” said Bill Bentley, director of A & R for Vanguard Records in Los Angeles and former Houstonian. “When the station went on the air, it was a real godsend. I bought an FM radio for that very reason. Houston was no longer a desert wasteland because up until that time we only listened to AM radio on our transistors.”

Broadcasting at 97.8 on the FM dial, Mother Radio was one of many radio stations that sprang up across America during the summer of 1967, just as the colorful new underground papers were popping up all over the country. These stations were all inspired by San Francisco’s underground flagship alternative, KMPX-FM, whose format was the creation of California radio visionary, Tom “Big Daddy” Donahue.

According to Bentley, KFMK was not only a media innovation, it was a lifestyle and cultural phenomenon that influenced a generation of Houston listeners. “The radio station was our beacon,” Bentley said. “It was a soundtrack for the new counterculture, a place we could listen in. Back-to-back, every song was great. It was like we died and went to heaven. The format fit the music, and it was cultural evolution. The DJs had the power to pick the songs, and treated the music with total respect. They believed in the music as much as the audience did.”

Up to this time, mainstream “terrestrial” radio historically broadcast on the AM frequency and only in less-than-glorious monophonic sound. Early FM stations broadcast in stereo but were limited to classical music, easy listening or “elevator music,” and foreign language broadcasts.

Listeners tuned in to Top-40 AM radio to hear contemporary pop music. Then as now, the disc jockeys were loud and chatty, the music was repetitive, and the medium catered to listeners with short attention spans. 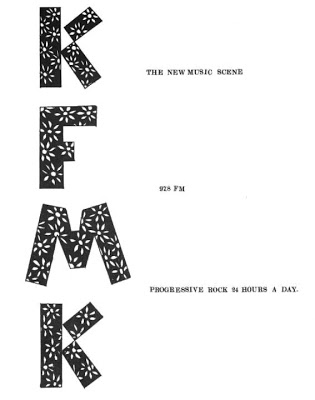 Mother Radio changed all the rules, according to former KFMK production director, Stephen Nagel. “We called ourselves ‘free-form radio’ and ‘progressive radio’ because the term ‘album-oriented radio’ hadn’t been invented yet. The whole thing was completely DJ-programmed. I don’t ever remember attending a programming meeting where I was told what I had to play. That was the whole idea; it was ‘free-form’ and there was no format I had to follow,” said Nagel.

KFMK and stations like it created a new kind of relationship between radio and listener. The announcer’s delivery was relaxed, the spinning of album tracks was innovative, and the multi-genre music was programmed in a manner that the songs segued and flowed into each other, attracting listeners who tuned in for hours.

“This is how we approached it,” explained Nagle. “We were going to play the tracks from the albums that AM radio didn’t play that we thought were just as cool as the tracks that AM radio was playing to death. We also weren’t going to yell at our audience but talk to them like they were our friends that knew something about the music we were playing and we weren’t going to play the same songs over and over again or limit ourselves to the ‘hit’ singles.”

A typical KFMK broadcast hour consisted of uninterrupted rock, blues, folk, and jazz music of the era, as well as Indian sitar ragas. At the top of the hour, the station played several commercials, followed by the daily horoscope, and a rip-and-read newscast that always ended with the DJ telling his listeners: “And the war drags on,” a line borrowed from a popular folk song that referred to America’s on-going involvement in Indochina.

All good things must come to an end and Mother Radio was no exception. Handicapped by a failure to attract a substantial market share of the Houston audience, an ineffective low-power transmitter and the bottom-line economics of inadequate advertising revenue, Mother Radio ceased broadcasting by mid-1969 and closed its doors. (According to the historical website, 1960’s Texas Music, pressure from the Houston Police was also a factor in the station’s closing.)

“KFMK was ahead of its time but under-capitalized for the Houston marketplace,” said Nagle who now makes his living practicing law in Austin. “The station owners misjudged what a cultural impact and profit-making potential commercial FM stations like KFMK would have in the future.”

By 1970, a new era of rock radio activity swept over Houston’s media landscape. Privately-held and substantially funded KLOL-FM competed with ABC Radio owned, KAUM-FM, for positioning and a slice of the new demographic pie with their versions of free-form formats. KILT-FM (“Radio Montrose”) as well as KRBE-FM also experimented briefly with progressive rock programming before transitioning into safer and more pop-oriented amalgamations.

(KAUM-FM, unique among the progressive radio stations, also had a large and innovative news department, rivaling even the AM news stations.)

1970 was also the year that Houston’s new listener sponsored, community radio station, KPFT-FM, signed on the air. The Pacifica radio affiliate came the closest to duplicating Mother Radio’s original concept, but only late at night, after prime time when its news and public affairs programming ended.

[Ivan Koop Kuper is a graduate student at the University of St. Thomas, Houston, Texas, and maintains a healthy diet of music, media and popular culture. He can be reached at kuperi@stthom.edu. Find more articles by Ivan Koop Kuper on The Rag Blog]