Jack A. Smith : Israel and Palestine After the Flotilla / 3 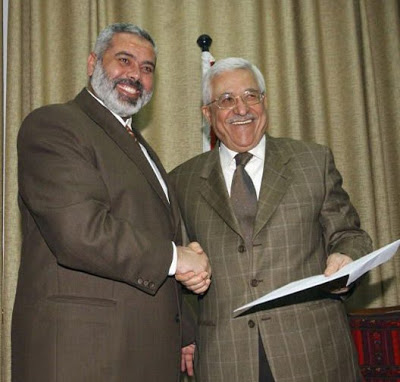 Then Palestinian Prime Minister Ismail Haniyeh of Hamas, left, meets Palestinian Authority President Mahmoud Abbas on March 19, 2006 in Gaza City. Haniya continues to function as Prime Minister, despite having been dismissed by Abbas the next year. Photo from Getty Images / Life.
Part 3: Two problems for the Palestinians
Israel and Palestine after the Flotilla

[This is the third in a four-part series in which Jack A. Smith assesses multiple aspects of the situation in Palestine, including the relations between Israel and the U.S., Israel and the Palestine National Authority, the Palestinian split between Fatah and Hamas, the action and inaction of the Arab states, the new role of Turkey, the key importance of Iran, and the future of Washington’s hegemony in the Middle East.]

Israeli domination and the right wing government’s unwillingness to compromise are the biggest problems confronting the Palestinians. But there are two other big problems.

The first is the present disunity between secular PNA/PLO, Fatah in the West Bank and, Islamist Hamas in Gaza. The two sides are far apart politically as well as geographically — a fact exploited by Tel-Aviv and Washington. The second problem is that while supportive of the Palestinians in general, the Arab countries themselves are split and relatively weak, with several of them within Washington’s sphere of influence.

Israel and the U.S. do not recognize or speak to the Hamas leaders, including Ismail Haniyeh who became Prime Minister after the January 2006 democratic election for the Palestine National Authority’s Legislative Council — which Fatah previously dominated. Hamas gained 74 seats to Fatah’s 45 in the 132-member body. Four other parties gathered the remaining seats. The Bush Administration immediately joined the Israeli government in discrediting the voting, which Jimmy Carter and other election monitors said was completely honest, and in seeking to subvert or overthrow Hamas, with which Israel considers itself to be at war.

The next year, as a consequence of a virtual civil war between Fatah and Hamas, PNA President Abbas — a former Fatah leader who also is chairman of the Palestine Liberation Organization (PLO) dismissed Haniyeh as Prime Minister. (The PLO has long been recognized internationally and by Israel as the “sole legitimate representative of the Palestinian people.”)

The Hamas leader contested the firing as illegal and continues to function as Prime Minister in Gaza only, legally backed by the Legislative Council. Abbas, who announced recently that he does not plan to run for reelection in January because of a lack of progress in negotiations, named Salam Fayyad Prime Minister. Fayyad functions in that capacity in the West Bank, without legislative approval and presumably without legal authority. He is considered to be friendly to the United States, where he lived as a student at the University of Texas in Austin while obtaining a PhD in economics — a field in which he is said to excel.

Over the years Israel has jailed dozens of elected Hamas legislators, mostly on spurious charges. At least 10 from Hamas remain locked up in Israeli prisons. According to a June 29 report by a Palestinian researcher, 7,300 Palestinians are presently held in some 20 Israeli prisons, including 17 legislators, two former ministers, and some 300 children.

The U.S. and Israel deal only with Abbas, Fayyad, and the PNA government. They are aware that these Palestinian partners are weaker today compared to the mass support enjoyed by the organization when it was led by the legendary Yasser Arafat until his death six years ago. And President Abbas, of course, is more amenable to making concessions to Israel and the U.S. than Hamas.

The reasons for the split between the two sides are complex. It cannot be forgotten that in earlier years Israel encouraged the growth of Hamas as an alternative to the secular and leftist Fatah led by Arafat. Fatah has lost some support from a portion of the Palestinian people for various reasons, not least being the internal contradictions, rivalry, and alleged corruption within the organization. Hamas offers an extensive and popular program of social welfare, and is said to fight corruption and favoritism. As such it has gained considerable support.

Much to Tel-Aviv’s regret, given its earlier hopes, Hamas turned out to be as dedicated to the national struggle as Fatah and the PLO. Unlike the PLO, Hamas refuses to recognize Israel, but has let it be known it is not inflexible when it comes to making a balanced and sustainable deal. Fatah does not recognize Israel, either. In reality, whether or not a political party “recognizes” a state has no legal significance. Recognition is a state to state affair. It’s fairly certain that an eventual Palestinian state will exchange mutual recognitions with Israel.

At this stage the two Palestinian factions remain enemies, though they agree on many issues. There have been reports in recent months that both sides have been contemplating terms for a possible reconciliation. Abbas said he was willing to send a Fatah delegation to Gaza for talks, but Hamas evidently rejected the bid. The Arab League has been pressuring the factions to work towards unity.

Some kind of unity between Fatah and Hamas, within the context of the PNA and PLO, appears to be required if the Palestinian people are to achieve their goals. Eventual necessity may bring them into a working relationship, especially if serious negotiations begin to bring an independent state closer to reality.

A main purpose of Washington’s strategy is to assure success for the U.S. government’s principal goal of controlling the Middle East. At this point it seems the U.S. wants to reduce the Israel-Palestine irritant to manageable proportions to secure Tel-Aviv as America’s surrogate at the eastern end of the Mediterranean, proximate to the strategic Persian Gulf with its oil reserves to the east, and North Africa including the Suez Canal to the west.

We will here briefly discuss the relationship between some key Arab states and the Israel-Palestine conflict, which has been going on for over six decades.

All the Arab countries give backing to the Palestinians rhetorically and some do materially as well. But very few these days — two decades after the collapse of the first global socialist project, which supported Palestinian aspirations — are willing to take political risks for Palestinian national liberation, given the probability of incurring Washington’s wrath in a unipolar world. Only two Arab countries maintain diplomatic relations with Israel — Egypt and Jordan, both of which are adjacent to Palestinian territory. In most cases relations between the other Arab countries and Israel are more distant but no longer antagonistic.

It may be of interest to note that the U.S. provides annual subsidies to both Arab countries that recognize Israel. Egypt gets $1.3 billion this year; smaller Jordan receives $540 million.

Egypt is the most powerful Arab country with a population of just over 80 million, and it remains influential in the region. But the days when the Cairo government sought to lead the Arab nations behind an anti-colonial and pan-Arab banner are gone with the desert winds of yesteryear, along with Egypt’s once significant military forces.

Cairo today is well within Washington’s orbit — and by extension, Tel-Aviv’s as well. The regime of President Hosni Mubarak despises Hamas because it is ideologically associated with its own principal internal enemy, the Muslim Brotherhood. It has thus joined Israel’s blockade of Arab Gaza.

Egypt had little option in the aftermath of the flotilla debacle but to finally open the Rafah Border Crossing just before Israel announced it was going to open some crossings of its own as part its partial easing of the blockade. These crossings are the only means for people or supplies to enter and exit Gaza. Access by sea remains prohibited by the Israeli navy.

President Mubarak is now 82 and he has held office for nearly 29 years, all of them under a continuing state of emergency granting him such extraordinary powers that he has been reelected routinely without challenge. The next presidential election is in 2011 and he has not yet declared his candidacy.

Mohamed ElBaradei, left, a potential challenger to Egyptian President Hosni Mubarak, is not favored by Washington or Tel Aviv. Image from eatbees blog.
Mohamed ElBaradei, who retired last year as head of the International Atomic Energy Agency, may enter as a candidate. He is not favored by Washington or Tel-Aviv, who wanted him to be much tougher on Iran. Mubarak is rumored to be grooming his son Gamal to succeed him in power. It’s doubtful the election will produce changes in Egypt’s relationship to Israel, but nothing’s ever certain.

Jordan with its large Palestinian population is in Uncle Sam’s pocket because it is small, weak, and insecure about both Fatah and Hamas. The ruling Hashemite Kingdom dramatically crossed swords with the PLO by cracking down on militant Palestinian groups in September 1970 (known to Palestinians as Black September).

By July 1971 the various organizations within the PLO were ousted from Jordan, with many finding refuge in Lebanon, where they were besieged again when Israel invaded that country in 1982. Jordan’s King Abdullah II may fear that either a secular democratic or an Islamic neighboring Palestinian state will ultimately undermine the monarchy. King Abdullah worked with Obama on developing the concept of a Palestinian state without military forces.

The kingdom of Saudi Arabia has received U.S. protection since the end of World War II in return for reliable access to petroleum, insuring the survival of the royal family with its particular form of Sunni Islam, Wahhabism. The Saudi government has helped the Palestinians financially and supports many of the PLO’s political positions, but its close association with Washington makes it an inconsistent friend of Palestinian liberation.

The Saudis do not have formal diplomatic ties with Israel but the relationship is cooperative and friendly. A strong independent and modern Palestinian state, either under the secular leadership of Fatah or Islamic governance of a different Sunni type, is problematic for the House of Saud and constrains its support.

The oil-rich Arab Gulf States, now including post-Ba’athist Iraq (which before Washington’s 2003 invasion was strongly supportive of Palestinian goals), all give a nod to the Palestinian cause but bend the knee to Washington’s global power.

Syria strongly supports the Palestinians in many ways and maintains cordial relations with both Fatah and Hamas, but it is no match for Israel’s regional military supremacy and America’s demanding presence and keeps a relatively low profile.

President Bashar al-Assad’s main interest is in negotiating a peace treaty with Israel leading to the restoration of the occupied Golan Heights to Syria, and in retaining its historic influence in Lebanon. He strongly opposed Israel’s invasion of Lebanon in 2006 and expressed admiration for the resistance waged by Hezbollah, the Shi’ite people’s organization supported by Iran.

Sophisticated and small Lebanon has too often been an Israeli battlefield for it to invite Tel-Aviv’s ire. However, some observers believe Israel will discover a pretext to invade once again to crush Hezbollah, the non-government Shi’ite Muslim defense force, after its failure to accomplish this objective in 2006. Israeli militarists are still smarting over the failure to destroy Hezbollah, which is essential to bring all Lebanon under its control.

Israel’s invasion cost the lives of 1,183 Lebanese civilians; some 4,000 were wounded, and over 30,000 family homes were destroyed or severely damaged. Throughout the month of warfare, Hezbollah sent thousands of largely ineffective though frightening unguided rockets into Israel killing 36 civilians. Hezbollah’s death toll is unknown. Israel also lost 118 soldiers.

The rest of the Arab countries, including one time radical states such as Libya, continue to back Palestinian hopes and vote correctly at Arab League meetings, but do little else to promote the cause.

1 Response to Jack A. Smith : Israel and Palestine After the Flotilla / 3