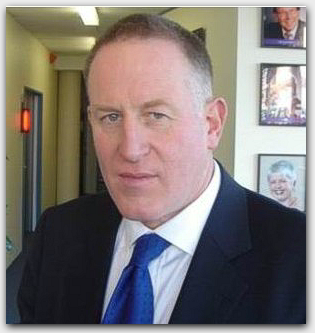 Until I came across the KeyWiki site I didn’t know I had my very own “Wiki” page. When I went to “my” page I discovered it focused exclusively on the political side of my life.

KeyWiki describes itself as

…a bipartisan knowledge base focusing primarily on corruption and the covert side of politics in the United States and globally. While particular interest is taken in the left, KeyWiki serves to expose covert politics on both the left and right of the political spectrum.

Accompanying this description was a photo of the Statue of Liberty.

Wondering who might be responsible for all this, the KeyWiki “team” identified only one individual, named Trevor Loudon, while “members of the KeyWiki team will be added below shortly.”

As it turns out, Trevor Loudon is a resident of Christchurch, New Zealand. Since New Zealand has a multiparty parliament it is a little odd that he describes his site as “bipartisan.” His description makes it clear he is focusing on the U.S., so perhaps he means “bipartisan” in the U.S. context. If that’s the case, then his “knowledge base” is virtually nonexistent when it comes to exposing “covert politics” on the right.

For example, a search on his site for David Horowitz — one of the few members of the New Left who became an outspoken conservative — produced information only about his incarnation on the left several decades ago. There were no pages or listings for well-known figures on the right such as Bay Buchanan, Ann Coulter, Nikki Haley, Sean Hannity, Rush Limbaugh, or Bill O’Reilly, though there are links on the companion KeyWiki.org site to blogs operated by Glenn Beck and Michelle Malkin. 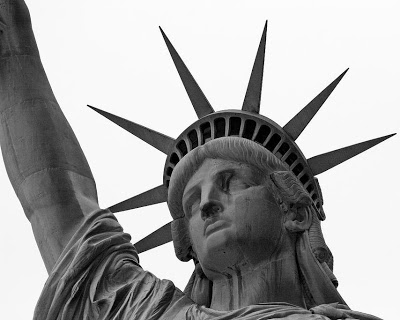 Statue of Liberty photo by David Prior / KeyWiki.
Thinking maybe these were insufficiently “covert,” I tried several others, including Bo Gritz, Eric Rudolph, and Randall Terry, turning up nothing. I thought he might have entries for well-known white supremacists David Duke or Tom Metzger, or for well known anti-Semites or Holocaust deniers such as Don Black or Willis Carto, but again, nothing. There wasn’t even a listing for the Ku Klux Klan.

There is no information on right-wing elected officials such as Michelle Bachmann, John Cornyn, Ron Paul, or Joe “You lie!” Wilson. Loudon maintains a separate blog called New Zeal (“promoting liberty in New Zealand and beyond”) on which he re-posted a Washington Times op-ed piece by former Representative and nativist Tom Tancredo (R-CO), in which Tancredo wrote: “Mr. Obama is a more serious threat to America than al-Qaeda,” to which Loudon approvingly appended “well said.”

There are a lot of items about individuals and groups on the left, including denunciatory articles about legislators Neil Abercrombie and Dennis Kucinich, and negatively-framed information about Alan Grayson and Bernie Sanders, among others.

There’s a list of “key organizations” that includes the Apollo Alliance, the Center for American Progress, Committees of Correspondence, Democratic Socialists of America, Institute for Policy Studies, and the New Party. Several other organizations and publications also rate considerable attention, including the Communist Party USA, In These Times, the Movement for a Democratic Society (MDS), the New American Movement (NAM), and The Rag Blog.

A September 2008 blog article (“therealbarackobama”) by Brenda J. Elliott was entitled “Has Trevor Loudon found the Ayers-Dohrn-Obama ‘smoking gun’?” According to Elliott, MDS was behind the creation of Progressives for Obama. Carl Davidson of Progressives for Obama responded that MDS “had nothing to do” with it, “nor did any one of the other alphabet soup of left groups you list.” Elliott further asserted “MDS is the brains behind the SDS brawn.”

America’s Survival Inc. president and Accuracy in Media blogger Cliff Kincaid and Loudon co-authored a 32-page article entitled “From Arms to Education to Political Power: Return of the SDS and the Weather Underground” to further smoke out MDS. Loudon and Kincaid found that under the auspices of MDS, the new SDS, the Center for American Progress and pro-Barack Obama elements were ominously coalescing:

Key to this overall effort is the MDS, which unites Rudd, Ayers, Dohrn and other members of the SDS and Weather Underground from many different socialist and communist organizations.

These assertions are certain to generate some laughter among those actually familiar with the organizations in question.

Former Obama administration “green jobs” director Van Jones was among those singled out by Loudon for special attention. Kincaid has used a Loudon link about Jones on his blog. Glenn Beck has given Loudon a shout-out for “exposing” Jones and Joel Rogers of the New Party. Another shout-out comes from Andrew Breitbart, who conjured up the recent brouhaha over Shirley Sherrod.

In fact, Loudon’s preoccupation with individuals with links, no matter how obscure, to (real or perceived) socialist or communist organizations puts him at the center of a revival of the redbaiting tactics of former Senator Joseph McCarthy.

Among the reasons I apparently rate my own KeyWiki page is I once signed a petition in support of academic freedom for, in Loudon’s word, “terrorist” Bill Ayers. Loudon’s definition of terrorism seems highly selective, or he must look across the Pacific to find it.

Nowhere does he mention the deadly French intelligence services bombing of the Greenpeace ship Rainbow Warrior in the Auckland harbor, or refer to that as a terrorist act. Nor does Loudon have anything to say about an incident in which New Zealand police pointed automatic weapons at the passengers of a Maori-operated school bus. 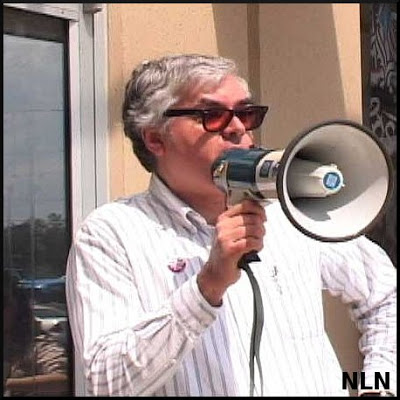 The Rag Blog‘s Jay D. Jurie: Sufficiently ‘covert’? Image from Jay’s KeyWiki page, in a photo lifted from Next Left Notes.
My page shows me as a signer of a statement several decades ago that advocated closer working relations between NAM and the Socialist Party USA. I owe Loudon a debt of gratitude for this, as I had forgotten all about it. After being reminded of this, my regret is that those closer working relations never materialized.

Virtually all “Rag Bloggers,” including Marion Delgado, have some listing on KeyWiki. Thorne Dreyer and David Hamilton are among those who have interested Loudon most. In fact, simply writing for The Rag Blog or signing the Progressives for Obama petition appears to be enough to rate your own KeyWiki page. And Loudon seems to consider The Rag Blog a virtual mouthpiece for his theoretical MDS/Progressives for Obama nexus.

[It should be pointed out that The Rag Blog is an independent progressive newsweekly, published by the non-profit New Journalism Project, and has no affiliation with any political group or party.]

Still left unanswered is the question about why Loudon hasn’t exposed covert politics on the right?

Since KeyWiki has only been in existence since April, perhaps he’s just been preoccupied with filling in the left-wing side.

A larger question is why has a New Zealander like Loudon created a Wiki site primarily concerned with the U.S.? Answers to these two questions seem to overlap. In several of his writings Loudon makes it clear he is a committed “Americanphile.” He apparently sees New Zealand as a satellite for what he believes, but the U.S. is the mother ship.

What are those beliefs? Several on-line sources identify Loudon as a member of the “Zenith Applied Philosophy” or ZAP cult, based upon an admixture of Scientology, Eastern mysticism, and John Birch-style laissez-faire capitalism. Loudon’s admiration for the U.S. and its traditions is apparently limited to that which conforms to his laissez-faire outlook. He has taken it upon himself to help chart the rightful course for the U.S.

Whereas its site claims “KeyWiki isn’t a part of any political party and we don’t support candidates,” Loudon is a former vice-president of New Zealand’s ACT (Association of Consumers and Taxpayers) Party. ACT appears to be more or less the equivalent of the U.S. Libertarian Party. According to its website, ACT espouses “free market classical liberalism” and “…seek[s] to rebuild diplomatic and political relationships with Australia and the United States.” ACT also seeks to negotiate a free trade agreement with the United States.

All of the above makes it patently obvious that Loudon is engaged in the “covert politics on the right of the political spectrum.” Rather than engage in honest pursuit of knowledge or debate, his modus operandi is duplicity. While KeyWiki masquerades as objective or balanced its real purpose is to conceal the advancement of a right-wing agenda.

In the deceitful pursuit of this purpose Loudon is not alone, as the shameful Breitbart attack on Shirley Sherrod makes evident. Washington Post columnist Eugene Robinson recently wrote of “a cynical right-wing propaganda machine.”

Trevor Loudon has not only helped fuel this machine with half-truths, distortions, and fabrications, but is one of its drivers.