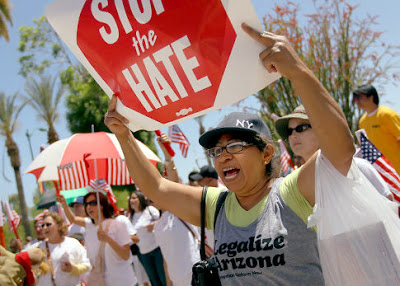 PHOENIX — Three months ago, Arizona Governor Jan Brewer signed into law the notorious SB 1070, a bill that put her state at the forefront of a movement to intensify the criminalization of undocumented immigrants.

Since then activists have responded through legal challenges, political lobbying, grassroots organizing, and mass mobilizations. More than 100,000 people from across Arizona marched on the state capitol on May 29. Today, hundreds more have pledged to risk arrest through nonviolent direct action. These are the public manifestations of an inspiring and widespread struggle happening in this state. The organizations leading this fight offer a vision for people around the U.S. concerned with human rights.

Yesterday, Federal District Court Judge Susan Bolton issued a preliminary injunction against sections of Arizona law SB 1070, which is scheduled to go into effect today. The judge put a hold on some of the most outrageous parts of the bill, such as language that mandates racial profiling by officers. However, Judge Bolton left much of the rest of the law intact, including sections that specifically target day laborers.

For Arizona activists, the legal ruling represents — at best — a small respite. “It’s not a victory, it’s a relief,” says Pablo Alvarado of the National Day Laborer Organizing Network (NDLON). “We’re putting a band-aid on a wound.”

Alvarado and the organizers with NDLON are part of a broad network of national organizations and volunteers who have joined with local organizers to fight not just against this unjust law, but also against a general climate of anti-immigrant hatred. “Arizona is a rogue state,” says Alvarado. “We’re going to use every single means that we have at our disposal to fight back.”

Puente Arizona, a Phoenix-based organization that describes itself as a human rights movement working to “resurrect our humanity,” has formed Barrio Defense Committees in neighborhoods across the city. Emulating the structure of groups founded by popular movements in El Salvador, the community-based structure work to both serve basic needs, and also build consciousness and help bring people together.

According to Puente activist Diana Perez Ramirez, the committees host regular “know your rights” trainings and ESL classes, and are organizing “Copwatch” projects. “We ask the community to unite and organize themselves,” says Ramirez. “And we are just there to support that.” More than 1,000 people have joined these neighborhood organizations so far, with more joining every day.

Puente has made use of volunteers from across the U.S., utilizing national support to help with local organizing, and initiating direct action with the support of out of town allies like the Ruckus Society, Catalyst Project, and various chapters of Students for a Democratic Society (SDS). They have issued calls to action including a Human Rights Summer (modeled after the civil rights movements’ Freedom Summer) and “30 Days for Human Rights,” a month of actions culminating today, the day SB 1070 will become law.

Just after midnight, as the law took effect, the first protest of the day began, as nearly 80 people blocked the intersection at the entrance to the town of Guadalupe, a small (one square mile) Native American and Hispanic community just outside of Phoenix. The town has a long history of struggle against Maricopa County Sheriff Joe Arpaio, who has been one of the main public faces of SB 1070, and most of the protesters (and all of the organizers) were from the community.

Holding signs declaring their opposition to the new law and leading chants against police brutality, activists declared that Arpaio’s officers are not welcome in their town. The stand off against police lasted more than an hour, before protest leaders in consultation with the town’s mayor decided to open the intersection. Several more actions are planned for today.

The Repeal Coalition, a Flagstaff- and Phoenix-based grassroots immigrants-rights organization, was formed in 2007. The group came together because they saw a vacuum in the immigrants’ rights movement in Arizona. “Some of the left here were not being very audacious,” explains Luis Fernandez of the Repeal Coalition. “The positions in the public debate ranged from ‘kick them all out,’ to ‘get their labor and then kick them out.’”

The Repeal Coalition has staked out a position of calling for the elimination of all anti-immigration laws, declaring, “We fight for the right for people to live, love, and work wherever they please.” With this call, says Fernandez, “Now we have a real debate.”

When the coalition was founded, organizers brought in labor activists to advise them on how to build an organization along similar models to those that have built strong unions, utilizing house calls, neighborhood mapping, and group meetings. Although they are an all-volunteer group with little to no funding, they have developed a structure that has initiated large protests and provided direct service, and they are now strategizing more ways to take direct action in the post SB 1070 era.

Fernandez says that this struggle is ultimately about overcoming fear and moving from reaction to proactive action. “We’ve been in a crisis in Arizona for a long time,” he explains. “Even if SB 1070 weren’t implemented, it wouldn’t matter. The political crisis would continue.”

To address this crisis, Fernandez believes organizations must build unity across race and class. “Traditionally in America, when the working class starts suffering, instead of connecting together and looking upwards at the cause of the problem, they look sideways or downwards for who to blame.” Most important, he believes activists must take action to seize the initiative.

In this vision, he has been inspired by young organizers working on the federal DREAM ACT, a federal law that creates a path to citizenship for undocumented youth. “They came to Arizona and said, ‘we’re undocumented and we’re going to commit acts of civil disobedience.’” At first, Repeal Coalition members tried to talk them out of this action, but the youth explained, “We are going to lose our fear because it is the fear of being arrested or the fear of being deported that fuels the inability of political action.”

The bravery and vision of these youth has inspired Fernandez to continue to search for new and bold ways to take action, rather than just continually respond to right wing attacks. “We need to set the agenda,” explains Fernandez. “We have to say, ‘No, you’re going to react to us.’”

Despite a range of tactics and philosophies, one thing organizers here have in common is a dedication to exporting the lessons of their struggle. While Arizona’s law is the first and most draconian, similar laws are pending across the country. And during this current national economic crisis, more and more politicians have found that they can score political points by demonizing immigrants.

“The last two months we’ve had a lot of people calling us asking what they can do to help Arizona,” says Fernandez. “We say, organize in your own town. You don’t have to come to Arizona because Arizona is coming to you.”

[Jordan Flaherty is a journalist, an editor of Left Turn Magazine, and a staffer with the Louisiana Justice Institute. He was the first writer to bring the story of the Jena Six to a national audience, and his award-winning reporting from the Gulf Coast has been featured in a range of outlets including The New York Times, Mother Jones, and Argentina’s Clarin newspaper. He has produced news segments for Al-Jazeera, TeleSur, and Democracy Now!. Haymarket Books has released his new book, FLOODLINES: Community and Resistance from Katrina to the Jena Six. He can be reached at neworleans@leftturn.org.]

Organizations Mentioned in this Article:

17 Responses to Jordan Flaherty : A Movement Rises in Arizona