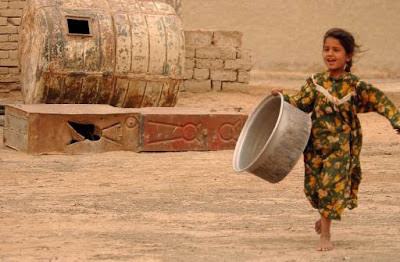 Iraqi child runs for water when the truck appears
After 5 years of war, Iraqis desperate for water
By Missy Ryan and Sattar Rahim / August 24, 2008

BAGHDAD, Aug 24 (Reuters) – At a communal water station in a Baghdad slum, a young boy’s skinny arms fly up and down as he uses a bicycle pump to coax water from the dry ground.

His efforts produce a languid stream that will tide over his family — and the families of the children waiting near him to fill their cooking pots — until the next day.

This is a daily ritual for millions of Iraqis who lack access to sufficient clean water and proper sewage five years after the U.S.-led invasion to topple Saddam Hussein.

Water and sewage are perennial challenges in this arid country, where the overhaul of decrepit public works has been hindered by years of war and neglect.

Nearly a billion litres of raw sewage is dumped into Baghdad waterways each day — enough to fill 370 Olympic-sized pools.

The United Nations estimates that less than half of Iraqis get drinking water piped into their homes in rural areas. In the capital, people set their alarm clocks to wake them in the middle of the night so they can fill storage tanks when water pressure is under less strain.

New investments in water and sanitation are only slowly bearing fruit even as Iraq seeks to capitalise on a dramatic drop in violence over the past year.

Iraqi and U.S. officials have been working to refurbish existing water plants, distribution lines and sewage works, but they say major infrastructure improvements will take years.

Since 2003, the United States has spent about $2.4 billion on Iraq’s water and sanitation sector, and the Iraqi government has now taken over funding major construction. But the World Bank estimates that at least $14 billion is needed.

In the apartment bloc where Suhad Mohammed lives in eastern Baghdad, water pressure is so weak that water doesn’t reach the top floors. Each morning, her husband and son help her fill plastic jugs from a communal tap downstairs and lug them up several flights of stairs.

“It gets even more complicated in the summer,” she said.

Acute cases of diarrhoea are three times more common in eastern Baghdad, where water service is most problematic, than in the rest of the city, the United Nations says. That side of the city has also seen a higher incidence of cholera.

OUT OF SIGHT, OUT OF MIND

Officials say the water system was neglected for decades under Saddam Hussein and was ill-equipped to keep pace with a rapidly growing population in the Iraqi capital.

Electricity, which flickers on in Baghdad for just a few hours a day, is another major problem. Back-up power systems at water plants are not designed to operate as often as they do.

“Every power cut, even if it lasts for just a few minutes, delays water production by three hours,” said Sadiq al-Shimari, director general of water facilities for Baghdad.

The state of Baghdad’s sewage system may be even more bleak.

“Out of sight and out of mind,” an official at the U.S. embassy said on condition of anonymity. “There wasn’t a lot of focus from the (former) regime on the long-term consequences of dumping raw sewage onto river banks,” he said.

The United Nations says that sewage seeping and being dumped into water supplies has “grave implications” for Iraqis’ health and the environment.

Waste and illicit use of water supplies abound, too, as they do in electricity distribution and other basic services.

“We have people illegally siphoning water from the pipelines, using potable water to irrigate their gardens and fill their fish pools,” complained one Baghdad official.

“Even water used by car washes — this wasted water could be used in areas already suffering from shortages.”

At the northern edge of Sadr City, a poor, largely Shi’ite area, a man named Ali points across a dusty, trash-strewn yard to the murky canal where he and his children bathe.

“The water is dirty, but what can we do? We don’t have any other choice,” he says, laughing bitterly.

“People like us, who earn three or four dollars a day, we spend it all on generators,” he said, referring to the informal network of neighbourhood diesel generator operators who supply Baghdad’s electricity when the power goes out.

The recently opened Sadr City water treatment plant, still in its pilot phase, is expected to provide a major boost to the city’s water supply once it is operating fully.

Other government renovation and construction projects are underway, and city officials say the volume of water moving through the system has already increased substantially.

“As soon as you build new plants, and you lay down new networks, you will be able to service more people,” another U.S. official said. “It’s as simple as that, but it takes time.”

In the meantime, the government, the United Nations, and some aid groups dispense water from trucks in some of the neediest areas of Baghdad, said Vinod Alkari, a water and sanitation expert with the United Nations Children’s Fund.

The Iraqi government has been criticised for dragging its feet in spending money budgeted for vital reconstruction.

“Now they apparently have enough resources, and they’re slowly moving toward using those resources,” Alkari said.

“But the task is immense. Even with all the money in the world, it would still take time.”

This entry was posted in RagBlog and tagged Health, Iraq. Bookmark the permalink.