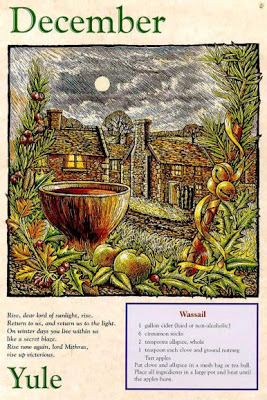 “Hark! the herald angels sing: Glory to the new-born King”

Sunday, December 21, 2008 we celebrate Yule, the Winter Solstice. How appropriate that this day, which marks the beginning of Lord Sun’s ascent to prominence, is Sun-day! Lady Moon is in her 4th quarter, seeming to voluntarily minimize her powers in recognition of Lord Sun’s rebirth. The Wheel is turning; the balance is shifting; the Earth is awakening.

Decorate your altar, table, house, and yourself using the colors red, white, and green. In addition to a Yule Tree, there may be boughs of greenery draped across the fireplace mantle, in front of your altar, over doorways, and as a wreath on the front door. A sprig of holly near the front door invites good fortune for the coming year and other sprigs, tied with a shiny red bow, can be used as party favors for your guests to take home and affix near their front doors. A small Yule Log with holes drilled in it to hold candles and surrounded by greenery can make a lovely centerpiece for your table. The use of evergreens in decoration symbolizes everlasting life, just as Lord Sun’s growing vitality after the dark time that began at Samhain symbolizes the earth’s reawakening and rejuvenation. And don’t forget a sprig of mistletoe to hang over the entrance. In the Long Ago, when warring Celtic tribes met to celebrate Yule, they kissed under the mistletoe as a pledge to set aside all differences during the celebration.

Serve your guests roast meats, nuts, apples, pears, Wassail, apple cider, spicy foods; sing carols in praise of Lord Sun’s rebirth. Yule is a season for celebrations as well as one for contemplation. Enjoy and cherish the company of friends and family. The end of a year and the beginning of the next is a good time to look within, to take some time and listen to our souls’ voices. Spiritually, we are awakening from a “long winter‘s nap“, readying ourselves for the next turn of the Wheel and all the delightful joys awaiting us in the coming year.

Yule, which comes from a Celtic word that means “wheel”, celebrates the change of power from the Holly King, who has ruled the planet since the Summer Solstice, to the Oak King, now filled with youthful energy. The Druids considered the Oak and Holly to be sacred trees; part of the Druidic mythology regarding the Solstices is that the Oak and Holly Kings, twin brothers, engage in semi-annual ritual combat to decide who rules for the next half-year. At the Winter Solstice, the Holly King is king of the old year. He dresses in red, trimmed with white fur, and wears a sprig of mistletoe on his cap. he rides in a sled or sleigh pulled by 8 reindeer — all deer were sacred to the Celtic gods and the number 8 refers to the 8 seasons represented by the 8-spoked Wheel of Life — and will be defeated by the Oak King, who symbolizes the young vitality of the New year. As Father Time is ritually succeeded by a diapered baby, so is the Holly King supplanted by the Oak King. Out with the old year; in with the new; sing songs of praise and exaltation to welcome Lord Sun‘s ascendance!

Reminder: I will be Elaine Ireland’s guest on her live-on-the-internet-radio-talk-show on Thursday, December 18, 2008, at 9 PM CDT. To listen on your computer, log on to www.bbsradio.com; from the options shown, select Channel 1 and from the drop-down menu look for “Going Global for Spirit with Elaine Ireland” and click on it. You will be able to hear me and Elaine nattering on about the Solstice and whatever else comes up. There is also a toll-free number for listeners in the US, in Canada, and in the rest of the world, so callers may phone in with a question, a comment, or to get a short Tarot reading from me.

The first Metaphysical Fair of 2009 will be on Saturday and Sunday, January 2 & 3, 2009, at the Radisson Hotel on Middle Fiskville Road between Highland Mall and Lincoln Village. Friday, January 1, 2009, the annual Prediction Panel of 5 of the psychics participating in the fair will be open to the public at 7:00 PM in the lecture room associated with the Metaphysical Fair at the Radisson Hotel. Admission to the Prediction Panel: free. Admission to the Fair: $8, good for both days. If you come to this fair because you read about it here and decide to get a reading from me, let me know you read this Seasonal Message and you will get an additional 5 minutes free. Whether or not you get a reading from me at this fair, please stop by the Tarot by Kate table and say “hi”. This is helps me monitor my advertising efforts.

This entry was posted in Rag Bloggers and tagged Alternative Energy, Spirituality. Bookmark the permalink.