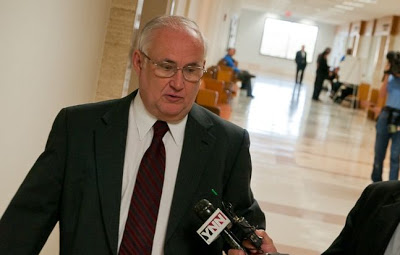 There is nothing new in Anderson’s conduct… While prosecutors love to tell jurors that they have a duty to see that justice is done, what they really like to do is convict people of crimes.

Anderson’s apology appears taken right out of the Politics 101 Manual — admit that a mistake was made, but explain the mistake away. The first problem with his apology, however, is that he began it with telling a lie.

Anderson said, “Twenty-five years ago, Michael Morton was convicted of murdering his wife in this very courthouse. The jury’s verdict was based on the evidence as we knew it at the time.” Thanks to the work of the Innocence Project, we now know that the evidence Anderson had available to him at the time of trial, but Morton’s defense attorneys did not have, included a statement made by Morton’s three-year old son to his grandmother that a “monster” with a mustache killed his mother, not Morton.

Had defense attorneys been given this information, which Anderson was required by law to reveal, Morton might not have been convicted. Anderson violated his sworn duty to reveal that information.

In addition, Anderson knew that a check to Christine Morton had been cashed nine days after her murder by someone who forged Christine’s signature, but Anderson withheld this evidence from defense attorneys. Anderson violated his sworn duty to reveal that information.

And there was evidence that someone had used Christine Morton’s credit card in San Antonio after she was killed, but Anderson failed to tell defense attorneys, and no law enforcement agency apparently followed up on this information after it was received by the Williamson County Sheriff’s Office (WCSO). Anderson violated his sworn duty to reveal that information.

One final piece of nondisclosed evidence that Anderson knew about or should have known about was a report by a neighbor that around the time of Christine Morton’s murder, he had seen a suspicious person park a green van behind the Mortons’ house on several occasions and walk into the adjacent wooded area. A second neighbor also had information about this suspicious person. Anderson violated his sworn duty to reveal that information.

The Texas Code of Criminal procedure provides that “It shall be the primary duty of all prosecuting attorneys… not to convict, but to see that justice is done. They shall not suppress facts or secrete witnesses capable of establishing the innocence of the accused.”

In 1963, the U.S. Supreme Court held in Brady v. Maryland that “the suppression by the prosecution of evidence favorable to an accused… violates due process where the evidence is material either to guilt or to punishment, irrespective of the good faith or bad faith of the prosecution.” Furthermore, Article I, Section 19 of the Texas Constitution gives an accused the same rights recognized in the Brady decision.

And the prosecution has a duty to learn of and disclose the exculpatory evidence in the possession of all members of the prosecution team, which includes the police, other law enforcement agencies, such as the WCSO, and other investigators working with or on behalf of the state.

In 1985, the U.S. Supreme Court held that evidence is material “if there is a reasonable probability that, had the evidence been disclosed to the defense, the result of the proceedings would have been different.”

All of the withheld evidence would have met that standard. We know this because immediately after the trial the assistant prosecutor in Morton’s case, Mike Davis, told some of the trial jurors that the state had failed to disclose some “investigatory materials to the defense.” Davis said that if the defense had gotten the materials, it would have been able to raise even more doubt than it did about Morton’s guilt. (See the Motion for New Trial filed on March 17, 1987, by defense attorney William P. Allison.)

While a bandanna with blood and hair fibers on it was found near the Mortons’ house during the investigation, it provided no help to Morton because DNA testing was in its infancy, but Anderson is using the earlier absence of DNA evidence as a smokescreen to hide his malfeasance, claiming that this new evidence is all that matters in showing Morton’s innocence. 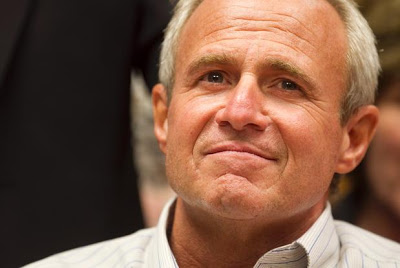 Convicted murderer Michael Morton was exonerated after 25 years in Texas prison. Photo by Jay Janner / Austin American-Statesman.
Judge Anderson now wants to pretend that he did nothing wrong and should be forgiven for securing a wrongful conviction, but he fought a subpoena to give testimony under oath for weeks, exhausting all appeals before being compelled to answer questions posed by Morton’s post-conviction attorneys, who represent the Innocence Project. Morton was released from prison a few weeks ago after the DNA evidence on the bandanna implicated another man in his wife’s murder.

This past week, the Austin American-Statesman reported:

On Nov. 9, Williamson County sheriff’s officers charged Mark Norwood, a Bastrop dishwasher and former carpet installer, with the murder of Christine Morton. DNA tests conducted last summer found Norwood’s DNA on a bandanna that had been collected from a construction site behind the Morton home the day after the murder.

Tests on the cloth were inconclusive in 1986, but the recent DNA tests confirmed that the bandanna also contained Christine Morton’s blood and one of her hairs. Norwood also is a suspect in the 1988 Austin murder of Debra Masters Baker. Like Morton, Baker had been beaten to death in her bed. No charges have been filed in the Baker case, which had remained unsolved.

Judge Anderson says he believes that 25 years ago he complied with the requirements then in place to disclose evidence that might tend to show the innocence of Morton. After refreshing his memory by reviewing the files that he compiled then, Anderson said, “I believe that the state’s prosecution team complied with all orders from the court and with the law on pretrial discovery and disclosures as it existed in 1987.”

Once again, Anderson will not admit the essential wrongdoing that he committed while serving as Williamson County District Attorney.

If Anderson continues to insist that he did nothing wrong 25 years ago, he further diminishes the reputation of another Williamson County district judge, the late Judge Bill Lott, who presided over the Morton trial. Anderson claims that he submitted to Judge Lott files that were not given to the defense for Judge Lott’s review to determine whether they included exculpatory evidence. Judge Lott did not find any exculpatory evidence in the files.

If Anderson gave Judge Lott any of the exculpatory evidence discussed above, and Lott ruled it was not exculpatory, he is implicated in this ongoing cover-up, as well.

There is nothing new in Anderson’s conduct. For anyone who has spent much time working in what is mistakenly called “the criminal justice system,” misconduct by prosecutors is not only common, but widely known. While prosecutors love to tell jurors that they have a duty to see that justice is done, what they really like to do is convict people of crimes.

The less scrupulous ones don’t care about what is termed “exculpatory evidence.” Anderson was one of that kind of prosecutor. He helped build the reputation of the Williamson County District Attorney’s office as a hard-nosed, “hang’em high” fiefdom, destitute of actual justice.

I have known prosecutors who bragged that the milk of human kindness did not flow through their veins. I have seen prosecutors who worked out their own sociopathic tendencies by being as hard, mean, and indifferent to human welfare as the most callous criminal. In fact, prosecuting is one of the professions where sociopathic behavior is regularly rewarded by advancement in the profession and sometimes by election to the position of district attorney.

Fortunately, not all district attorneys and prosecutors take out their own personality defects through their work. There are many hard-working, diligent prosecutors who primarily seek justice, not convictions, but Williamson County in recent decades has not produced too many of this kind. Judge Anderson and the current occupant of his former position, John Bradley, have done a disservice to the notion of justice. Bradley fought even the testing of the DNA evidence in Morton’s case until he had exhausted all avenues of interposition.

During this same period, Bradley served as Gov. Rick Perry’s minion as the head of the Texas Forensic Science Commission in an attempt to keep evidence of Cameron Todd Willingham’s wrongful conviction and execution from being officially acknowledged. Bradley now claims to have had a Damascus Road experience and to be a changed man, following only the path of righteousness as a prosecutor. I’ll believe that when Willingham comes back to life.

The average citizen does not know the level of corruption that can exist in a system such as the Williamson County District Attorney’s office. When a prosecutor is working in a courtroom with a prosecutor-friendly judge, there is nothing that can be done in the prosecution of a defendant that is too extreme.

Unfortunately, Ken Anderson and John Bradley do not represent this latter group. They have been comfortable with ignoring the requirements of the law, judicial decisions, and the ethical code they are sworn to uphold, which provides that, “The prosecutor in a criminal case shall… make timely disclosure to the defense of all evidence or information known to the prosecutor that tends to negate the guilt of the accused or mitigates the offense.”

Whatever Ken Anderson says now, the record shows that he failed in his legal and ethical duties in the Morton case. It was a personal moral failure, a professional failure, and a failure to do justice to Michael Morton, Christine Morton, the Mortons’ young son, the entire Morton family, the actual murderer of Christine Morton and Debra Baker, the citizens of Williamson County and the State of Texas, and to the system of justice that Americans believe makes us special among nations. Maybe our system is not so special after all.