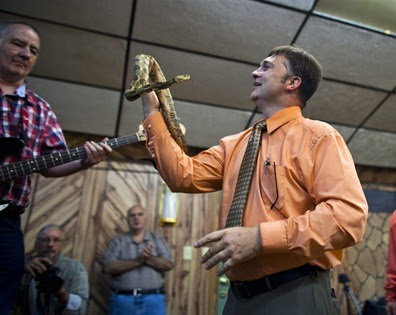 ‘And these signs will follow those who believe: in My name they will cast out demons; they will speak with new tongues; they will take up serpents…’

Among the Abrahamic religions — Judaism, Islam, and Christianity — the tiny group of Christians known as Pentecostal serpent handlers are among the most unusual of Christian sub-groups. They have focused their religious belief and practice on a few verses at the end of the book of Mark — verses that do not appear in the two oldest versions of writings that became the Gospel of Mark.

Few ministers or pastors tell their congregations this truth about Mark and about much of the Bible. What they mainly do is read it and interpret it, and many teach that every word in the Bible was created by a supernatural God and given to some human being to write down.

Such teachings were my experience growing up. No minister ever told me that over 5,000 (now, nearly 6,000) known manuscripts make up the text of what we call the Bible. Maybe if congregants knew such facts, they would not take so seriously everything found in the Bible. I suspect, though I do not know, that many ministers may not themselves know about these textual variations.

Even when I took New Testament Greek in college, I was not told that the Greek version of the New Testament that we studied lacked clear authenticity.

The case in point this week is the death of the West Virginia Pentecostal preacher, Mark Randall “Mack” Wolford, age 44, who died from a snake bite he received handling snakes in church. Wolford was a devout believer in the passage in Mark 16:17-18:

And these signs will follow those who believe: in My name they will cast out demons; they will speak with new tongues; they will take up serpents; and if they drink anything deadly, it will by no means hurt them; they will lay their hands on the sick, and they will recover.

Mack Wolford’s father had died from a snake bite in a similar fashion when Mack was 15. His family’s faith in this passage of Mark prevented them from seeking medical attention. Such believers often attribute deaths from snake bites to two causes: either the victims lacked sufficient faith or it was God’s will that they die.

None of them consider that they may have been reading and believing in an inauthentic version of the Gospel of Mark. As Bible scholar and textual critic Bart Ehrman explains,

As we learned at Moody [Bible Institute] in one of the first courses in the curriculum, we don’t actually have the original writings of the New Testament. What we have are copies of these writings, made years later — in most cases, many years later. Moreover, none of these copies is completely accurate, since the scribes who produced them inadvertently and/or intentionally changed them in places.

The main reason for the changes, or variants, is that these scriptures were written by hand in days before the printing press was invented. Transcription errors, as a particular scripture is copied from an older one, are inevitable. Words are misread, letters are transposed (often changing the meaning of words), spelling and grammar errors abound, words are incorrectly separated or joined together, sentences are left out or repeated, and new material may be added for purposes known only to the transcriber.

Most of these variants don’t make much difference. But sometimes variants make a great difference.

Such is the case of Mark, chapter 16. Scholars know about four transcripts of the Gospel of Mark. Generally, they consider the earliest versions of scripture the most authentic. According to Ehrman in his book “Misquoting Jesus,” the last 12 verses of Mark were added to the later manuscripts nearly 300 years after it was first copied and are not found in the two oldest and best manuscripts. Mark is also the earliest of the Gospel texts, so it is not surprising that Luke has a similar passage concerning serpents at Luke 10:19 — Mark was its source.

Even Ehrman’s critics, such as Daniel B. Wallace of the Dallas Theological Seminary, acknowledge him as “one of North America’s leading textual critics.” Textual critics study the work of the people who tediously copied religious manuscripts, study the process by which certain manuscripts were accepted as a part of what we know as the Bible (its canonization), study these texts of the Greek New Testament, and determine through evidence and reasoning which parts of the text have authentic origins and which parts were added by a different author at some later time, and why, to the extent that can be determined.

In the case of the last 12 verses of Mark, chapter 16, Ehrman explains that not only are they not found in the two oldest manuscripts attributed to Mark, but the writing style of these 12 verses differs from the rest of the text; the transition between these verses and the earlier text makes little sense in the context of the story (Mary Magdalene is referred to as though she had not been mentioned earlier, but she had been); and many of the words and phrases in the 12 verses are not found elsewhere in Mark.

Ehrman states that “nearly all textual scholars” believe these verses were added to Mark by a later scribe, possibly to smooth out what would have been an abrupt ending to the writing with no mention to the disciples of Jesus’s resurrection or his appearance to the women who went to the tomb.

For Ehrman, “the task of the textual critic is to try to recover the oldest forms of these texts.” This task is important because Christianity “is a textually oriented religion whose texts have been changed.” The meaning of the New Testament can’t be grasped if the words that were intended are not known. This is true whether one believes the words are divinely inspired or one believes merely that the New Testament is a significant book.

For Ehrman, the New Testament “is an enormous cultural artifact, a book that is revered by millions and that lies at the foundation of the largest religion in the world today.”

I find that many Christians don’t know that it wasn’t until around the year 250 of the Common Era that a generous benefactor of the Roman church, Marcion, put together the first collection of scriptures that he considered the sacred texts of the faith, often referred to as the canon.

But Marcion chose what scriptures should be included in the canon based on his belief that the God of the Old Testament was not the same God of Jesus and Paul. He believed they were two different Gods — the God of the Jews, who created the world and had very harsh laws that had to be followed, and “the God of Jesus, who sent Christ into the world to save people from the wrathful vengeance of the Jewish creator God,” as Ehrman explains.

Marcion’s canon included a Gospel (a version of Luke) and 10 epistles, with no Old Testament. Because he also believed that others who disagreed with him had altered some of the texts, Marcion amended the texts to leave out references to the Old Testament God.

About 30 years later, another Christian writer, Irenaeus (known as the bishop of Lyons in Gaul — what is now modern France) criticized Marcion’s version of the canon and produced one of his own, which included the more familiar four Gospels.

Debates raged about the canon for several centuries. In the latter part of the fourth century, the bishop of Alexandria, Athanasius, approved 27 books that make up what we know generally as the New Testament today. It took many decades, perhaps centuries, for this version of the New Testament to be widely accepted among Christians, and there are differences among some of the versions in use today.

Further, the manuscripts from which the New Testament was taken do not have punctuation, verses, and chapters. These were added later to create some order within the texts.

If only the Pentecostal serpent handlers understood what Ehrman and other scholars of the Bible teach about the origins and development of the text of the New Testament, their lives might be quite different. Perhaps the two verses in Mark on which they base some of their religious practices and beliefs would not have seemed so important, and both Mack Wolford and his father before him would not have died from handling snakes as part of their religious worship.