Lockerbie : A ‘Conspiracy Theory’ Worth Pursuing 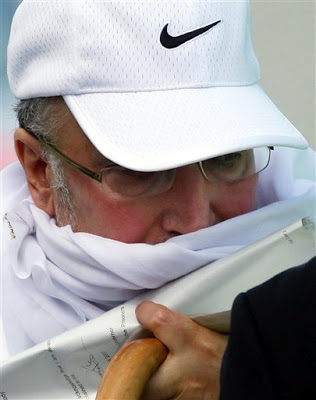 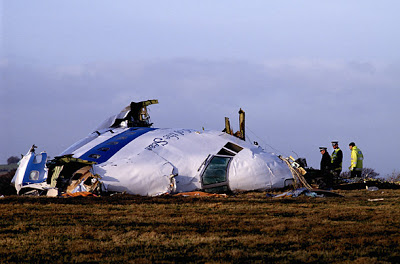 Convicted Lockerbie bomber Abdel beset Ali Mohamed al Megrahi is being released from prison because he has only a few months to live. He is terminally ill with prostate cancer.

The cable news channels are milking the story for all it is worth, while summarily dismissing as “conspiracy theories” alternative accounts of what happened at Lockerbie.

One of those explanations is worth looking at.

Pan Am 103 crashed in Lockerbie, Scotland, on December 21, 1988, killing 270 people from 21 countries. Included in this total were eleven residents of the Scottish town. A bomb had been planted on the plane, probably by Hezbollah. Perhaps the organization was taking revenge for Iran-Air Flight 655 that was shot down six months before by a U.S. fighter jet from the carrier Vincennes.

While the Iranians were considering revenge, Major Charles McKee of the Defense Intelligence Agency and five others were in Lebanon looking into the drug trade and trying to find a way of rescuing nine American hostages there. The team appeared to have little or no information about what two other U.S. intelligence units were doing in Beirut.

Unfortunately, they soon learned that one of those units was dealing in drugs and weapons, presumably as a way of gaining leverage to free American hostages. Somehow they also learned that CIA operatives in a team Wiesbaden named COREA were running what seemed to be a rogue drug operation out of Frankfurt. They boarded 103 with evidence but were never able to present it. Later the military claimed they were flying back to the US in violation of their orders.

At the heart of these drug operations was Monzer al-Kassar. This Syrian drug smuggler had moved Polish arms for Oliver North to the Nicaraguan Contras. He was also closely tied to the brother of the Syrian dictator, Hafez al Assad. According to former Reagan aid Barbara Honegger, Al Kassar earlier worked for Reagan and NATO in laundering weapons for Iran through corrupt Italian intelligence people tied to P-2, the secret fascist lodge.

Some of al-Kassar’s drug profits helped to finance the PLO. Al Kassar was the middle man in paying for the release of two French captives in Beruit and he facilitated communications with respect to the remaining nine American hostages in Lebanon. In return for his services, the U.S. protected his drug pipeline into the U.S.

The DEA was then permitting controlled shipments by Al Kassar out of Frankfurt with a view to using the drugs to entrap dealers in the U.S. The code name for the operation was AKhourah.@ Reporter Will Weinberg learned that the DEA and CIA had asked the BKA, the German internal intelligence agency, to let certain suitcases in Frankfurt through without inspection. Apparently, a suitcase full of Semtex explosives was quietly substituted for one that held drugs.

The problem was that the amount getting through was far larger than necessary. When DEA/DIA agent Lester Coleman, using his diaries, later wrote about this, he encountered all sorts of legal problems. Danny Casorolo, a journalist, interviewed Coleman and was knifed in a West Virginia motel. Unfortunately, his body was immediately embalmed, so a full autopsy would not have been possible.

Coleman had been in Beruit for six years as part of a secret unit called MC10, Middle East Collection 10, and his payment came as travelers checks issued by BCCI. Two of his colleagues had been murdered in the year before the loss of Pan Am 103. In subsequent court testimony, he said that his unit was using PROMIS software, even though the government repeatedly said it never used this software.

Two Sampsonite suitcases of drugs were shipped from Frankfort that day in addition to the “controlled delivery.” They were the same kind of bags as those used by Kassar. One was aboard Pan Am 103 and the other was diverted to another flight which arrived in San Francisco. Some theorize that the CIA team in Frankfurt was running a rogue drug operation and that the plane was permitted to explode to cover their misdeeds.

U.S. and German agencies received at least two warnings that a bomb would be aboard PanAm 103. It has been claimed that Oliver “Buch” Ravell, assistant director of the FBI, was privy to one of those warnings and took it seriously enough to remove his son from that flight. Two books and some litigation address this issue.

Eventually, the State Department claimed that it had not forwarded the warnings to the FBI. Robert Mueller headed the investigation. He had also handled the investigation of the collapse of BCCI. However, Ravell was well connected and it was frequently claimed that he worked with Oliver North in hiding much of the information related to the Iran Contra scandal.

In 1996, Gene Wheaton, formerly with the Army Investigative Command, wrote that Revell was one of several security consultants who proposed forming a “Death Squad” to assassinate people identified as terrorists.

Strong evidence developed that U.S. intelligence knew that a bomb was on the plane but did nothing to remove it. The CIA knew Hezbullah had planted a bomb on the plane and had an opportunity to remove it but chose not to. The accident scene was teeming with Americans, including Oliver North’s assistant.

Scottish police said that American authorities restricted their access to the site for two days while Americans feverishly sifted through the wreckage. They carried away a number of pieces of baggage. Both heroin and cocaine were found there. Bob Woodward later reported in the Post that there were documents aboard that tied Lt. Colonel Oliver North to terrorist Abu Nidal.

COREA was being investigated by the Germans and enough of the story was known that there was open speculation in Time, US News and World Report, Barrons, and The New York Times. Susan Lindauer, a Fox and US News and World Report journalist also worked as a CIA asset and claims she knew that the 1988 bombing was a Hezbollah operation in retaliation for the downing of an Iranian airliner.

She added that the CIA had advanced warning of the plot. She served eleven months of incarceration in 2005-2006 without being charged, perhaps because she had operated as a back channel to Bagdad and tried to warn second cousin Andrew Card, Bush’s chief of staff, that the Iraqis did not have weapons of mass destruction.

The U.S. first blamed Syria and the CIA probably correctly hired some group to plant the bomb. Later the U.S. shifted the blame to Libya when it needed Syria’s backing in the 1991 war with Iraq. The only evidence pointing to the Libyan government was a fragment of a circuit board logged in as evidence four days after the explosion. There is some question of when it was logged in and some say it was found months later in a wooded area far from Lockerby. It was said to be made by a Swiss firm which only sold the part to Libya and the East German Stasi.

Dr Richard Fuisz, a CIA agent, medical researcher, and millionaire, claimed that he had solid proof that Lybya was not involved in the bombing and he added that he knew who planned it. Soon thereafter, in October, 1994, a federal court issued a gag order, on the basis of the “military and state secrets privilege.”

Internal U.S. Defense Intelligence Agency documents surfaced in 1994 suggesting that the British and Americans believed that the real bomber was the Syrian operated Popular Front for the Liberation of Palestine. However, the diplomacy of the first Gulf War made it useful to blame Libya.

In 2003, a retired CIA officer told Megrahi’s lawyers that the CIA gihad planted the evidence. In 2005, Scotland Sunday reported that a retired police officer “of assistant chief constable rank or higher” has said that the circuit board fragment had been planted by the CIA. George Esson, former Chief Constable of Dumfries and Galloway, said he knew about the other policeman coming forward. The informant contacted the lawyers for Abdelbaset Ali Mohmed Al Megrahi, who was imprisoned at Greenock Prison for the crime.

The Edinborough Herald reported that there were documents proving that the CIA offered to pay two key witnesses to testify against the accused Lybians and that it offered witness protection and relocation.

[Sherm, your author, believes that that some of these alternative explanations need to be explored but finds that, while they are often at least as convincing as the official explanations, they lack all the information necessary for conclusive proof. In his book on the Republican Party he followed far more conventional rules because he believed the case he was making was so important. His The New Republican Coalition: Its Rise and Impact, The Seventies to Present (Publish America) can be acquired by calling 301-695-1707. On line, go here.]

This entry was posted in Rag Bloggers and tagged CIA, Conspiracy Theories, Middle East, Terrorism, US Intelligence. Bookmark the permalink.

3 Responses to Lockerbie : A ‘Conspiracy Theory’ Worth Pursuing