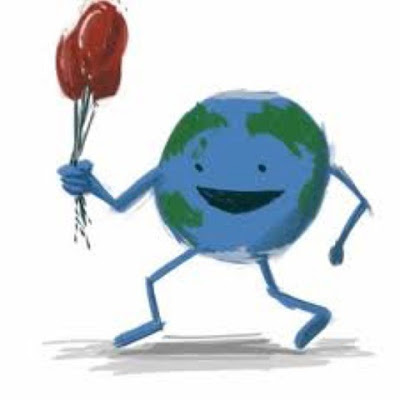 A most common comment. Depressed about what? The answers are various: our dangerous, deaf, moronic leadership, the ongoing wars, religious strife, public and private corruption, joblessness, lack of child care, housing, perverse spending priorities, the entire fate of the earth. So I thought I might bring some cheer this month by calling for a birthday celebration, a BIG birthday celebration — the October 23rd anniversary of the birth of… EXISTENCE.

That’s right. On October 23rd, 4004 BC, at 4 p.m., Eastern Standard Time, or midnight in the Garden of Eden, God created the heavens and the earth. And the earth was without form and void.

Such was the conclusion of James Ussher (1581-1656), Archbishop of Armagh, Primate of All Ireland, and Vice-Chancellor of Trinity College in Dublin, after profound and exhaustive study of scriptural genealogies and Middle Eastern and Mediterranean histories. His conclusion was incorporated into an authorized version of the Bible printed in 1701, and thus came to be regarded with almost as much unquestioning reverence as the Bible itself.

Six thousand and six years old! That’s a lot of years. And after all that time, what have we come to? The Decline of the West.

Way back in 1919, Oswald Spengler saw it all, the grand pattern, the “inward form of History,” repeating through all recorded time, and in every major culture, including ours.

“For everything organic the notions of birth, death, youth, age, lifetime are fundamentals…”

He saw all cultures come into springlike being, youthful and vigorous, flower in their summery, unique ways, and then autumnally decay. Their winters were frozen into rigid, petrified forms, and these forms he called “civilization.”

Our Western culture had been born around the tenth century, flowered in the Gothic and the Renaissance, became “civilized” in the eighteenth century, and in the nineteenth century, with the industrial revolution, had begun the process of spiritual decline.

The upcoming death of Western Culture was as certain as that of any other living organism. History was Destiny, unfolded through the cycle of human cultures, all of which shared a common rhythm and pattern. We cannot choose our destiny, we cannot alter it. We have no choice but to make the best of our historical situation.

Stark. Dramatic. No wonder it attracted so much attention. In this wintertime essay, he drove his metaphor hard. When the freezing point of a culture is reached, like water, it expands and can shatter its container. Though spiritually exhausted, it gathers the technical and material capacity for outward reach, desperately grabbing at life. And so begins what he called an Age of Caesarism.

He predicted the coming of totalitarian states, not by looking at the social movements around him, but by taking the longest possible view. He predicted a coming age of imperialist wars in which nations would complete their spiritual death, and finally fall to pieces, yes, like Rome, but also like every other culture, finally succumbing to the invasion of new forces, alien, hostile to the old, full of springlike, spontaneous creativity and religious devotion.

In the inevitable final battle between civilized engineers and God-inspired barbarians, the engineers would go down clutching pens and pencils. Artists would also succumb: this was not a time for soul. Art would be frustrated by society’s rejection, or corrupted by its licentiousness and power — a spiritual vocation gone astray. The Zeitgeist is inevitable, a time of perverted men in a hopelessly perverted age, liars calling liars liars.

Spengler spoke of the endless repetition of the “already-accepted,” of standardized art, of petrified formulas which would ignore and deny history. “Events,” he said, would become “the private affairs of the oligarchs and their assassins,” and would arise from administration, not society. He foresaw professional armies operating with an entirely different morality than civilian society. In 1917, he noted, “In a few years, we have learned virtually to ignore things which before the war would have petrified the world.”