Marc Estrin : Holocaust Thinking in America II: How the Nazis Did It 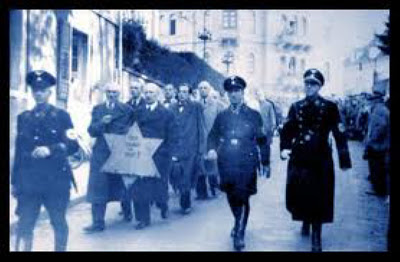 Holocaust thinking in America II:
How the Nazis did it

I know one is not allowed to use the word “nazism” in any discussion of current practices, that the holocaust is unique, etc., etc. — but if you don’t see the similarities between the structures put into place in Germany in the mid- and late-1930s and those evolving here, now, well then, you don’t see structural similarities.

What were the moves the Nazis evolved to “overcome animal pity” with regard to Jewish victims?

Step 1. Defining the enemy. Jewishness was clearly and legally defined as part of a problem. Thus the Jews were made “other” to the rest of the population.

Step 2. Eliminating the enemy from the economy. Jews were not allowed to work in state-affiliated institutions. Jewish stores were boycotted and vandalized. “Otherness” was thereby increased, as the Jews were forced from the normal productive economy, and were now an ever-increasing problem — and not just by definition.

Step 3. Ostracism by custom and law. Many other discriminatory laws were put into place. No Jews allowed, here or there, this place or that.

Step 4. Removal from view. Ghettos were created to wall the problem off from the rest of the population. Jews thus became less visible. When they began to disappear, there was often little to notice. As intolerable conditions developed in the ghettos, inhuman measures were justified as humane. Jews were killed in “acts of mercy” — in order to “spare them the agony of famine.” In deliberately intolerable conditions, the stage was set for even more radical steps.

Step 5. Transport to slave labor camps, using these “outsiders” to support the economy.

To better make some later comparisons, let me provide more detail about Step 3 above: “other discriminatory laws.”

In his hair-raising book, Nazi Justiz (Praeger 1995), Richard Miller describes the gradual, multifaceted ways in which Jews were turned from productive members of society into a kind of “living dead” who were permitted to wander through society, but forbidden to take part in it. The mass killings in the camps was only a late development, the logical “final” successor of many incremental “solutions” inflicted along the way on an increasingly desperate people.

Miller concentrates on Germany in the 30s, after the rise of Hitler, but before the war, all changes affecting Jews were done “legally,” “democratically,” with support from the media and the German people. In this “time of peace,” a variety of local and national laws were passed, with due deliberation, in no way a result of military desperation. Across the country, jot by innovative jot, legal and social restrictions fell into place which sealed the victims’ fate.

The movement began with “unofficial” boycotting of Jewish businesses or professionals. Boycotts spread to those who patronized Jews in any way, thus taking goods and wages away from good German citizens. Having a street conversation with a Jew could lead to charges of “race pollution” and “civic disloyalty,” and perhaps to being paraded through town, with a sign around one’s neck. Such “unofficial” boycotts were peppered with equally “unofficial” violence, of which Kristallnacht was the most coordinated example. Naturally, there was no police protection.

Having recognized a “mandate” from the people, governments began to act. A pastiche of creatively sadistic local law and ever more inclusive national law took control of Jewish life, and eventually obviated the need for “unofficial” populist action.

Place by place, Jews were not allowed in parks, theaters, libraries, museums, sports stadia, beaches, athletic and social clubs. They could not be guests in hotels, or get service at restaurants. One profession after another banned Jews from being licensed. Jews would no longer be granted permits to open retail stores, or be allowed into blue or white collar unions or the jobs they controlled.

No Jew could be a detective, private guard, accountant, or work in a credit agency. No Jew could be a tourist guide, a peddler, auctioneer, or real estate agent, or manage a factory, house, estate, or land. Needless to say, all the new business and newly opened job opportunities went to Aryans, vastly increasing the popularity of the Nazi regime. Jobs, jobs, jobs. And housing.

In areas where Jews were not yet banned, other ways were found to shut them down. Before real estate licenses were outlawed for Jews, tax authorities refused to deal with Jewish agents, leaving few property owners interested in hiring them. Sugar was cut off to Jewish bakers and candy-makers, effectively destroying their businesses.

Legal Jewish newsstands would be refused newspapers; Jewish textile managers could no longer get raw materials. Jewish businesses could not put ads in commercial directories, newspapers, on billboards or the radio. Eventually all employment was restricted except particularly disagreeable tasks: cleaning public toilets and sewage plants, jobs at rag and bone works were considered possibly “suitable” for Jews. Outside of such work, Jews had to somehow fend for themselves.

How could even that be made more difficult? Travel bans and invalidation of passports were obvious. But how about no parking for Jews? Special license plates to identify Jewish cars for special harassment. Soon enough, prohibition of drivers licenses, and then restriction from public transportation.

Impoverished Jews could not rent their homes, sublet, or sell. Retirement benefits and contracted pensions were canceled, as were all insurance policies. Jewish students were not allowed to take finals, and so couldn’t complete their schooling. All student loans had to be repaid within two weeks, regardless of contractual payment schedules; those in default were subject to police action.

Jewish streets were not cleaned, nor were other municipal services available. German police, when present at all, were an occupying army, and beatings and attacks were common. Many main sections of towns became off-limits to Jews, and any remnants of Jewish culture came under attack: Jewish art and music were censored as “decadent,” and even jazz was attacked as “a barbarian invasion supported by Jews.”

Because Jews were to be restricted from so many areas, they needed to be easily identified. Rush-hour passengers were not about to tolerate checking IDs of every boarding passenger. Eventually the yellow star was required, with strict punishment for any Jew who did not wear one in public. Jews were forbidden to name their children with “Aryan sounding names,” and had to adopt the middle names “Israel” or “Sarah,” and use these names when identifying themselves.

Germany has long been known as a land of “law and order.” But Jews could not use the justice system to thwart clearly illegal onslaughts. All courts were packed with government appointees to enforce, not judge, official policy. The object of the law was to protect the state, not the individual citizen. If Jews were a menace to the state, then all laws oppressing them, were both legal and just.

Furthermore, laws were seen as implying “direction,” and were not confined to their original settings. For instance the Law for the Restoration of the Professional Civil Service spoke only of dismissing Jewish government employees. Martin Heidegger however, as rector of the University of Freiburg, ended fellowship payments to Jewish students under the guiding spirit of that decree.

Courts built rulings on Nazi party resolutions, and took their philosophical guidance from Hitler speeches. In 1934 Goering complained that defendants still had so many rights that convictions were being impeded. Naturally, Jewish defendants were at an extreme disadvantage.

Jewish lawyers were barred from court; Aryan lawyers could not serve Jews. Consequently, Jews had to represent themselves against highly trained adversaries. Judges were instructed to view Jewish witnesses “with extreme caution,” and no verdict was to be passed when a sentence would have to be based entirely on Jewish testimony.

Just in case there were any legislative objection to these judicial proceedings, Hitler pushed through the “Enabling Act” which allowed his handpicked cabinet to make laws having the same validity as any passed by the Reichstag, even ones disregarding the Constitution. The circle was closed, complete and tight. The living dead would soon become the dead — period.

Next week: You don’t need a weatherman to tell which way the wind blows — here and now in America.

2 Responses to Marc Estrin : Holocaust Thinking in America II: How the Nazis Did It