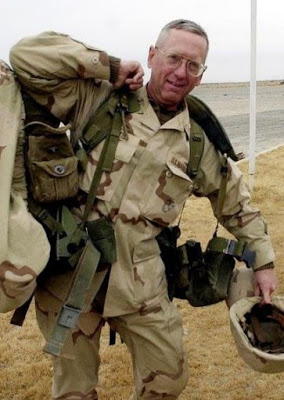 So we have a new general to lead our Central Command (or CENTCOM), overseeing our operations in 20 countries from Egypt, across the Middle East and into South and Central Asia. This, btw, courtesy of our Defense Department. There is a lot of ours out there that may need defending.

Anyway, our new leader, appointed by our other new leader’s Pentagon, one Gen. James Mattis, seems to be quite a guy. Looks nice enough to have a beer with, no? Does his own laundry. Wears intellectual-type glasses. The kind of leader we need to win hearts and minds.

“I like brawling,” he is quoted as saying. Hey, one of the guys. “You go into Afghanistan, you got guys who slap women around for five years because they didn’t wear a veil, you know, guys like that ain’t got no manhood left anyway. So it’s a hell of a lot of fun to shoot them.” A feminist, no less.

Well, OK — for this statement, he was reprimanded. Perhaps it was for the feminism part, but reprimanded he was, your Secretary of Defense assures us, dismissing any possible concerns from hearts-and-mind-ists or male-ists. He was reprimanded and asked to choose his words more carefully in the future.

And now, five years past, SECDEF guarantees that “the lesson was learnt.” A Brig-Gen in the know tells us that the old brawler has “since proven himself a statesman, including by working with 27 nations in a NATO command position, and SECDEF agreed, saying, “Obviously in the wake of the Rolling Stone interview, we discussed this kind of thing, and I have every confidence that General Mattis will respond to questions and speak publicly about the matters for which he is responsible in an entirely appropriate way.”

Without, hopefully, indulging in pedagogical overkill, let us survey the more obvious simulacra in this story:

Most obviously, there is the simulacrum of appropriateness. Now in control of his brawling essence, or at least of its mouth, Gen. Mattis has learned to say the right things and not the wrong things. This should assure us that the hearts and mind simulacrum can remain intact.

Second, consider the simulacrum of “learning,” as in “the lesson was learnt” — in the passive case. The simulacrum of metrics testifies to that via Mattis’s being able to “work” with 27 (count ’em) nations, as NATO’s “supreme allied commander for transformation” which “focuses on supporting current operations while shaping US forces for the future.” This, no doubt, was a grueling test of Mattis’s maturation among the boys.

We proceed to the simulacrum of assurance. Of what does SECDEF assure us? His “confidence” (sharing faith with us) is that the good General will “respond to questions and speak publicly… in an entirely appropriate way. ” Good doggie. How he still feels and acts, and what behavior he encourages among his troops is another thing. But we can be confident that his performance at the simulacra of briefings will no longer raise eyebrows.