Maureen Dowd on Hillary and the Dem Convention : Yes She Can 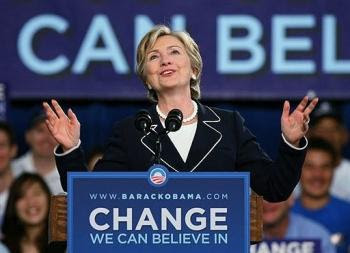 Hillary Clinton campaigning for Barack Obama August 8 in Henderson, Nevada.
‘She’s amazed at how easy it was to snatch Denver away from the Obama saps’
By Maureen Dowd / August 12, 2008

While Obama was spending three hours watching “The Dark Knight” five time zones away, and going to a fund-raiser featuring “Aloha attire” and Hawaiian pupus, Hillary was busy planning her convention.

You can almost hear her mind whirring: Like taking candy from a baby, except Beanpole Guy doesn’t eat candy. In just a couple of weeks, Bill and Hill were able to drag No Drama Obama into a swamp of Clinton drama.

Now they’ve made Barry’s convention all about them — their dissatisfaction and revisionism and barely disguised desire to see him fail. Whatever insincere words of support the Clintons muster, their primal scream gets louder: He can’t win! He can’t close the deal! We told you so!

Hillary’s orchestrating a play within the play in Denver. Just as Hamlet used the device to show that his stepfather murdered his father, Hillary will try to show the Democrats they chose the wrong savior.

Her former aide Howard Wolfson fanned the divisive flames Monday on ABC News, arguing that Hillary would have beaten Obama in Iowa and become the nominee if John Edwards’s affair had come out last year — an assertion contradicted by a University of Iowa survey showing that far more Edwards supporters had Obama as their second choice.

Hillary feels no guilt about encouraging her supporters to mess up Obama’s big moment, thus undermining his odds of beating John McCain and improving her odds of being the nominee in 2012.

She’s obviously relishing Hillaryworld’s plans to have multiple rallies in Denver, to take out TV and print ads and to hold up signs in the hall that read “Denounce Nobama’s Coronation.”

In a video of a closed California fund-raiser on July 31 that surfaced on YouTube, Hillary was clearly receptive to having her name put in nomination and a roll-call vote.

She said she thought it would be good for party unity if her gals felt “that their voices are heard.” But that’s disingenuous. Hillary was the one who raised the roll-call idea at the end of May with Democrats, who were urging her to face the math. She said she wanted it for Chelsea, oblivious to how such a vote would dim Obama’s star turn. Ever since she stepped aside in June, she’s been telling people privately that there might have to be “a catharsis” at the convention, signaling she wants a Clinton crescendo.

Bill continues to howl at the moon — and any reporters in the vicinity — about Obama; he’s starting to make King Lear look like Ryan Seacrest.

The way the Clintons see it, there’s nothing wrong with a couple making plans for their future, is there? That’s the American way and, as their pal Mark Penn pointed out, they have American roots while Obama “is not at his center fundamentally American in his thinking and in his values.”

The Clintons know that a lot of Democrats are muttering that their solipsistic behavior is “disgusting.” But they’re too filled with delicious schadenfreude at the wave of buyer’s remorse that has swept the Democratic Party; many Democrats are questioning whether Obama is fighting back hard enough against McCain, and many are wondering, given his inability to open up a lead in a country fed up with Republicans, if race will be an insurmountable factor.

Some Democrats wish that Obama had told the Clintons to “get in the box” or get lost if they can’t show more loyalty, rather than giving them back-to-back, prime-time speaking gigs at the convention on Tuesday and Wednesday. Al Gore clipped their wings in 2000, triggering their wrath by squeezing both the president and New York Senate candidate into speaking slots the first night and then ushering them out of L.A.

Wednesday will be all Bill. The networks will rerun his churlish comments from Africa about Obama’s readiness to lead and his South Carolina meltdowns. TV will have more interest in a volcanic ex-president than a genteel veep choice.

Obama also allowed Hillary supporters to insert an absurd statement into the platform suggesting that media sexism spurred her loss and that “demeaning portrayals of women … dampen the dreams of our daughters.” This, even though postmortems, including the new raft of campaign memos leaked by Clintonistas to The Atlantic — another move that undercuts Obama — finger Hillary’s horrendous management skills.

Besides the crashing egos and screeching factions working at cross purposes, Joshua Green writes in the magazine, Hillary’s “hesitancy and habit of avoiding hard choices exacted a price that eventually sank her chances at the presidency.”

It would have been better to put this language in the platform: “A woman who wildly mismanages and bankrupts a quarter-of-a-billion-dollar campaign operation, and then blames sexism in society, will dampen the dreams of our daughters.”

1 Response to Maureen Dowd on Hillary and the Dem Convention : Yes She Can