Mike Davis : The Embers of September 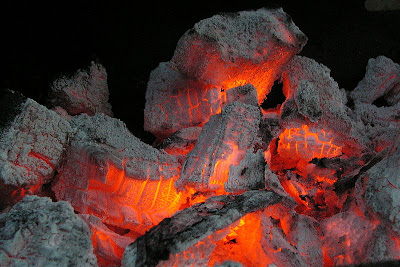 Embers. Image from Wikimedia Commons.
The Embers of September

Ten years ago, Lower Manhattan became the Sarajevo of the War on Terrorism. Although conscience recoils against making an equation between the assassination of a single Archduke and his wife (28 June 1914) and the slaughter of almost 3,000 New Yorkers, the analogy otherwise is eerily apt.

In both cases, a small network of peripheral but well-connected conspirators, ennobled in their own eyes by the bitter grievances of their region, attacked a major symbol of the responsible empire. The outrages were deliberately aimed to detonate larger, cataclysmic conflicts, and in this respect, were successful beyond the all imagining.

However the magnitudes of the resulting explosions were not simple functions of the events that detonated them. For example, in Europe between 1890 and 1940, more than two dozen heads of state were assassinated, including the kings of Italy, Greece, Yugoslavia, and Bulgaria, an empress of Austria, two presidents of France, two Spanish prime ministers, and so on. Apart from the murder of Franz Ferdinand and his wife in Sarajevo none of these events instigated a war.

Likewise, a single suicide bomber in a truck killed 241 U.S. marines and sailors at their barracks at the Beirut Airport in 1983. (Fifty eight French paratroopers were killed by another bomb the same day.) A Democratic president might have been pressured to go to war against the Shiite and Druze militias, but President Reagan distracted the public with an invasion of tiny Grenada, and then quietly withdrew the rest of his Marines.

If Sarajevo and the World Trade Center, by contrast, unleashed global carnage and chaos, it was because of the de facto collusion between the attackers and the attacked.

I’m not referring to mythical British plots in Balkans or CIA agents blowing up the Twin Towers, but simply to the well-known facts that the Imperial German General Staff had already decided in 1912 to exploit the first opportunity to make war, and that powerful neoliberals in Bush’s White House were lobbying for the overthrow of the regimes in Baghdad and Tehran even before the last hanging chad had been counted in Florida.

Both regimes were in search of a casus belli that would legitimate military intervention and silence domestic opposition. Prussian militarism, of course, was punctually accommodated by the Black Hand (an anarcho-nationalist group secretly supported by the Serbian Army), while Al Qaeda ‘s sublime horror show in lower Manhattan consecrated the divine right of the White House to torture, secretly imprison, or kill by remote control.

At the time, it seemed almost as if the Republicans had staged a coup d’etat against the Constitution. Yet the Bush administration could point to a whole catalogue of precedents. To put it bluntly, every single chapter in the history of U.S. global power has opened with the same sentence: “innocent Americans were treacherously attacked…”

Remember the Maine? Or the Lusitania (1198 dead)? Or the Panay, Pearl Harbor, the crossing of the Yalu, and the Gulf of Tonkin? The besieged legation in Peking, Aguilnaldo’s alleged attack on U.S. sentries outside Manila; Al Raisuli’s brazen kidnappings; Pancho Villa’s raid on sleepy Columbus, New Mexico; the rapine of National City Bank in Port-au-Prince; the storming of the Pueblo and the Mayaquez, the humiliated hostages in Tehran; the imperiled students in Grenada…

This list barely scratches the surface: the synchronization of outrage and intervention in U.S. history is relentless.

In the name of “innocent Americans,” the USA annexed Hawaii and Puerto Rico; colonized the Philippines; punished nationalism in North Africa and China; invaded Mexico (twice), sent a generation to the killing fields of France (and imprisoned dissent at home); massacred patriots in Haiti, the Dominican Republic, and Nicaragua; annihilated Japanese cities; committed genocide in Korea and Indochina; buttressed military dictatorship in Latin America; and became Israel’s partner in the mass murder of Arab civilians.

Someday — perhaps sooner than we think — a new Edward Gibbon in China or India will surely sit down to write The History of the Decline and Fall of the American Empire. (Hopefully it will be but one volume in a larger, more progressive oeuvre — The Renaissance of the Asia, perhaps — and not an obituary for a human future sucked into America’s sinking void.)

I think she’ll probably catalogue self-righteous American “innocence” as a particularly toxic tributary of national decline, with President Obama as its highest incarnation.

Indeed, from the perspective of the future what will be deemed the greater crime: to have created the Guantanamo nightmare in the first place, or to have preserved it in contempt of global popular opinion and one’s own campaign promises?

Obama, who was elected to bring the troops home, close the gulags, and restore the Bill of Rights, has in fact become the chief curator of the Bush legacy: a born-again convert to special ops, killer drones, immense intelligence budgets, Orwellian surveillance technology, secret jails, and the super-hero cult of General Petraeus

Our “anti-war” president, in fact, may be taking U.S. power deeper into the darkness than any of us dare to imagine. And the more fervently Obama embraces his role as commander in chief of the Delta Force and Navy Seals, the less likely it becomes that future Democrats will dare to reform the Patriot Act or challenge the presidential prerogative to murder and incarcerate America’s enemies in secret.

Enmired in wars with phantoms, Washington has been blindsided by every major trend of the last decade. It has completely misread the real yearnings of the Arab street and the significance of mainstream Islamic populism, ignored the emergence of Turkey and Brazil as independent powers, forgotten Africa, and lost much of its leverage with Germany as well as with Israel’s increasingly arrogant reactionaries. Most important, Washington has failed to develop any coherent policy framework for its relationship to the PRC, its main creditor and most important rival.

From a Chinese standpoint (assumedly the perspective of our future Gibbon), the United States is showing incipient symptoms of being a failed state. When Xinhua scolds the U.S. Congress for being “dangerously irresponsible” in debt negotiations, or when senior leaders openly worry about the stability of American political and economic institutions, the shoe is truly on the other foot. Especially when standing in the wings, bibles in hand, are the mad spawn of 9/11 — the Republican presidential candidates.

This entry was posted in Rag Bloggers and tagged 9/11, Imperialism, Mike Davis, War on Terror, World History. Bookmark the permalink.

5 Responses to Mike Davis : The Embers of September