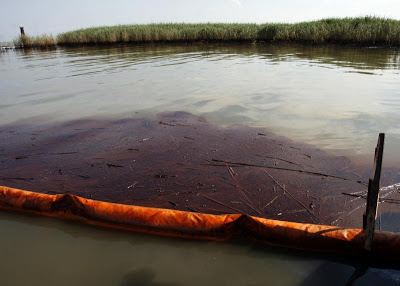 Crude oil collects on the wrong side of an orange containment boom in Pass a Loutre near Venice, Louisiana, May 30, 2010. Photo by A.J. Sisco / UPI.
Skimmers and booms:
Keywords for victory on the Gulf Coast

If Americans want to visualize victory over the oil spill invasion that threatens our beloved Gulf of Mexico, then we should call for a federalized war of skimmers and booms.

We should not be timid about it. We should visualize a series of booms in concentric rings that contain the spill, with skimmers at work within each ring, sucking up the oil. Industry websites claim that extracted oil can then be mixed with chemicals and reused for fuel.

The effort might also be helped by supertankers “that come in empty, with the huge valves and huge pumps that they have to suck the oil off the surface of the sea so it stops drifting into the wetlands,” says former president of Shell Oil John Hofmeister in a recent interview with the BBC.

As part of this winnable war, dispersants must be stopped.

Our winning hope for this war is nicely exemplified by the Coast Guard Cutter Walnut, which just left Hawaii for her 6,000-mile journey to the Gulf.

“The Walnut is 225-feet long, has a crew of about 50 people, and boasts state-of-the-art communications equipment and oil skimming capabilities,” reports Minna Sugimoto for Hawaii News Now. “Designed after the Exxon Valdez disaster in 1989, the Walnut comes equipped with a boom and pump oil collection system.”

“The skimmer sucks the oil in and pumps it into a bladder,” says Jeffrey Randall, U.S. Coast Guard commanding officer. “That bladder is then filled up, transferred to another vessel that takes it away.”

“Coast Guard officials say the crew goes through annual spill response training, but this will be the first time it’ll actually put oil in the equipment,” Sugimoto reports.

As early as April 29 the Los Angeles Times was reporting the Navy’s mobilization of booms and skimmers and the “opening (of) two of its bases in Mississippi and Florida as staging areas.” WLOX- Biloxi reporter Steve Phillips filed an eyewitness account of the activity from the Gulfport Seabee base.

Vice Adm. Kevin McCoy is commander of the U.S. Navy’s Naval Sea Systems Command’s (NAVSEA) which includes the Supervisor of Salvage and Diving (SUPSALV). Within these commands we find initial offerings of equipment, expertise, and training that will be required to defend the Gulf of Mexico against the oil spill invasion.

“A team of NAVSEA professionals are working around the clock to protect the sensitive coast lined with oil booms and perform open-ocean skimming at the source,” says Vice Adm. McCoy at a web page posted by the Naval News Service (NNS).

“NAVSEA’s Chief Engineer for Underwater Salvage (Capt. Patrick Keenan) has been an integral member of BP’s Engineering Command Cell that has assembled the best and brightest minds from around the world to try to stop the leak,” said Vice Adm. McCoy.

“With a single phone call from the U.S. Coast Guard, 66,000 feet of open ocean boom and nine self-contained skimming systems, and the professionals to install and operate them, were dispatched (representing the initial shipment). That’s your Navy — a 24-hour Navy, incredibly ready and trained to respond to a wide variety of national taskings,” boasts Vice Adm. McCoy.

Meanwhile, activists and biologists are converging on a consensus that toxic dispersants must be stopped.

“The use of dispersants is a crime on top of a crime, sanctioned by a federal agency, Lisa Jackson, and the EPA,” writes Elizabeth Cook at New Orleans IndyMedia. “It is the rape of the Gulf of Mexico, its sea creatures, and the people who depend on this ecosystem for a living.“

“Diluting the evidence, this (dispersant) solution was designed only for public relations, even as it made the situation much worse,” argues Linh Dinh at CounterPunch. “Imagine Agent Orange in the water. Thousands of people are already sick, with millions more to come.”

With enough booms to contain the spill, and enough skimmers to extract the oil from the water, there would appear to be no need to add the risk of toxic dispersants to the already toxic spill.

When on Sunday’s “State of the Nation” program, CNN’s Candy Crowley asked Joint Chiefs of Staff Chairman Admiral Mike Mullen to describe the military response to the Gulf oil spill, the answer she got was a textbook case of incoherence.

Within the space of 141 words the Chair of the Joint Chiefs zig-zagged between “a support role” that simply responded to BP requests on the one hand to “doing everything we can… with every capability that we have” on the other. His confusing ambivalence was perhaps best expressed in the sentence: “And as best I’ve been able to understand, the technical lead for this in our country really is the industry.”

While it may be true that the deep-water attempt to stop the oil spill belongs primarily to industry engineers (although, along with Dr. John, we may protest why this has to be the case) there is ample evidence that the military is perfectly qualified to take command of pollution control.

Remember Dunkirk or the Berlin Airlift? There are times in military history when impossible missions have been accomplished through mobilized determination. We should not give up hope that the war to the save the Gulf of Mexico can go down in history as one of those remarkable efforts.

Elizabeth Cook of New Orleans IndyMedia helped with research and issue development for this story.