Norman Finkelstein on Israel and the Occupation of Palestine 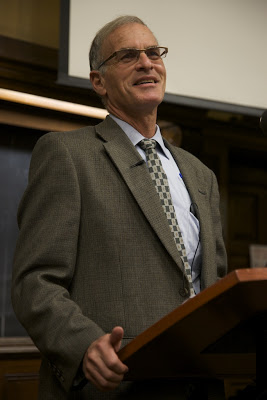 Norman Finkelstein speaking at the University of Texas at Austin. Photo by Alan Pogue / The Rag Blog.

His theory on Israel’s attack on Gaza was that Hamas had become too moderate, too reasonable, too willing to make a deal. His most damning evidence was contained in quotes from Israeli politicians saying that if the cease fire went on too long it would give Hamas credibility.

[Norman G. Finkelstein is an independent scholar with a doctorate in political science from Princeton University. For many years he taught political theory and the Israel-Palestine conflict and is the author of five books that have been translated into many languages. He is a consistent critic of Israel’s role in the Middle East. Finkelstein spoke to an overflow crowd Tuesday night at Welch Hall on the campus of the University of Texas at Austin.}

I went to hear Norman Finkelstein last night and am glad I did. He is Jewish and the child of parents who were in the Warsaw Ghetto and Auschwitz but he understands one cannot be moral only within one’s group. The invasion of Lebanon in 1982 opened his eyes to what the government of Israel was doing. He turned his formidable intellect on the lies told to justify the suppression and removal of Palestinians.

He invited the Zionists to field someone to debate with him but they demurred. No one came to heckle him. There was a standing room only crowd at Welch Hall, UT Austin. He reminds me of Noam Chomsky in that his delivery is so smooth and coherent, so well researched, that it sounds simply like sweet reason. His key theme was international law and the international consensus that Israel is breaking international law. Being the scholar that he is he gave plenty of names, dates, places, and quotes with referenced sources.

His theory on Israel’s attack on Gaza was that Hamas had become too moderate, too reasonable, too willing to make a deal. His most damning evidence was contained in quotes from Israeli politicians saying that if the cease fire went on too long it would give Hamas credibility. If Hamas gained credibility then Israel would be forced to make a deal. Israel has no intention of leaving the West Bank so Hamas had to be provoked into firing more ineffectual rockets so that Israel could then unleash the massacre of the Gazans that it had been planning for six months.

Norman also linked the attack on the helpless civilian population in Gaza to the Israeli military’s poor showing against Hezbollah in Lebanon which had caused a lack of sufficient fear of Israel among the general Arab population. Norman also quoted many Israeli military leaders in making his case. He spoke about the use of white phosphorous by the Israeli military, all made in the USA. He quoted the Red Cross, Amnesty International and Human Rights Watch on their reactions to the white phosphorous and the bombing of the U.N. schools, headquarters, food and medical supplies.

He spoke at length about the effects of the Israeli blockade of Gaza and the war crime that it is. Norman prefaced his remarks by defining the invasion of Gaza as a massacre. He pointed out that there were no battles since Hamas had no army in the same sense that Israel has an army. No Israeli war plane was shot down.

Norman asked that anyone present who wished to dispute anything he had to say to please come up and take the microphone. One student asked about the Marionites in Lebanon who asked for Israel’s aid against those inside Lebanon who were attacking them. Norman spoke about the factions within Lebanon for a minute but said that was not the subject of his lecture and that in any case there is ample evidence that Israel was not interested in the general welfare of the Lebanese people. He invited the young man to continue the discussion of Lebanese political parties later which he did.