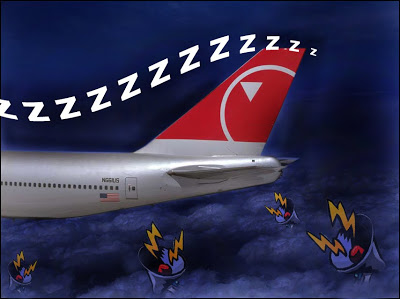 Last Wednesday, Oct. 21, Delta-Northwest Airlines flight 188 from San Diego to Minneapolis arrived an hour late after the plane’s pilots somehow flew right over the Minneapolis airport and kept on flying eastward for another 150 miles, all the while failing to respond to repeated radio calls to them by air traffic controllers.

As of today the pilots are sticking with the story they gave the NTSB that they were “in a heated discussion about airline policy” and lost “situational awareness” when they flew past their destination at 37,000 feet. Earlier, over Denver, ATC got no reply from repeated radio calls on various frequencies to the Northwest pilots nor did other FAA centers till the plane finally turned around after overshooting Minneapolis. It looked enough like a possible hijacking that National Guard jets were put on standby by the White House.

Regardless of what the two pilots are claiming to the press, the logic of what happened would seem very clear to most pilots, even a non-commercial private pilot like me, and especially any pilot flying under Instrument Flight Rules. Let’s consider a few things…

Airline pilots almost always only physically fly the airplane during takeoff, and landing. After climbing out to altitude the “flight plan” is keyed into the autopilot computer which does all the long course leg flying. If ATC changes their flight plan while they are up at assigned altitude they just key in the changes in heading and altitude and the plane’s system flies the changes very smoothly and efficiently. They then usually only physically take control to land after being cleared to descend and land by ATC. Of course bad weather flying may require the pilot to take over to skirt thunderstorms and such.

Most of the descent is routinely programmed into the computer as well, with the pilot taking the controls when on final to land. Most passengers do not know that many of today’s modern aircraft have automatic landing systems where the plane’s flight controls and throttles are all computer controlled. This allows once impossible landings through thick soupy rain and fog right to touchdown. Many larger airliners even have a “full stop ” landing capability that flies the plane to touchdown, steers it straight on the runway heading, slows it down and applies brakes to a full stop if that capability is ever necessary. Pilots are still in total command, but the new capabilities make life lots easier when needed.

So, with all this considered, an intense cockpit conversation about union rules and inequities that lasted from Denver to beyond Minneapolis, drowning out all the radio, email and data messages would have had to be compelling dialogue worthy of Shakespeare.

Airline bean counters in recent years have been combating increasing fuel and operational costs by tightening up flight schedules and pilot-crew pay. FAA-required rest and sleep times have been complied with only on paper in many instances. The real world includes airport-motel flight crew travel times, time to eat, getting restful sleep, waking up way too early, showering and dressing and making it to back the airport on time. Too frequently this stretches FAA requirements way too thinly. Not enough actual beneficial sleep, which is cumulative, can make pilots tired and less sharp. This reportedly is all too frequently becoming routine.

Imagine, a little before Flight 188 reached Denver, the Captain says to the First Officer in the right seat, “Charlie, I’m really beat and may be coming down with a damned cold. How about taking it while I get a couple of minutes sleep?” First Officer, Charlie, says, “Sure Skipper, I’ve got it. Great weather, smooth air, so catch a couple winks.” This is prohibited by the FAA for U.S. airlines.

Then with the familiar crackle of radio chatter the only distraction in the cockpit, good old Charlie, who is more worn out than the Captain, starts to nod a little, then a little more and soon he is out cold, deeply asleep. And neither pilot wakes up till a flight attendant bangs on the door or repeatedly clangs the little intercom chime in the cockpit.

It is not reasonable that pilots, knowing they really screwed up, are going to tell authorities or the press right off the bat that they went to sleep with 144 passengers on board. They will stonewall it, futilely hoping their Airline Pilots Association lawyers can intervene with the NTSB and FAA and possibly get them off with a suspension from flying for a few months instead of losing their licenses and hard earned “type ratings” certifying them to pilot multiple models of airliners. A life’s worth of training and experience snoozed away is too tough to accept.

The pilots’ attorneys know this story will quickly fall off the TV news radar screen and be replaced with some other bizarre event. Just a few days before this latest Delta-Northwest Airlines bizarre story, one of Delta’s airliners landed in Atlanta at 6:o3 AM on a taxiway instead of the runway. Fortunately no one was taxiing as they landed. Because of dominating political news, that equally incredible story didn’t get the big play this mystery pilot story is getting.

Perhaps my oft-mentioned “two-headed mule,” will appear on CNN with each head actually making speech-like utterances as if they were talking, one head delivering one sentence with the other head picking up the next mulish garble. But on second thought, that may not be novel enough even for CNN. . . that kind of thing is seen constantly on cable newscasts. But with two human “co-anchor” talking heads which have nicer hair and sometime even speak intelligibly as they divide the news commentary, one line for him, then next for her.

Nothing would delight me more than to be completely blindsided with some astounding revelation from the NTSB and FAA investigations of the errant Northwest Airlines flight that exonerates the Captain and Charlie. Interestingly, Northwest is supposed to be the first North American carrier operating the new 787 Boeing “Dreamliner”… maybe this was a secret test flight?

If the pilots are exonerated, I will certainly post a new article on such findings… unless I get completely distracted with news of a real live two headed mule somewhere.

Breaking news now tells us that Captain Timothy Cheney and First Officer Richard Cole are telling investigators that instead of having had a “heated discussion” they had broken out their laptop computers and the junior officer was showing the Captain how to use a new computerized crew-scheduling system being introduced by Delta-Northwest where pilots now put in “bids” by computer for the flights they prefer.

The picture is now not napping pilots, but pilots totally absorbed in their laptops with no idea where they were, and not even using their radios. Their cyber-seance was broken, they say, when a flight attendant knocked on the door and asked what their estimated arrival time was. By then, at 37,000 feet they were more than 100 miles beyond their destination.

At this point would you rather have had pilots sleeping, or pilots totally unaware of radio communication or where the plane was while they were fully awake? Talk about people using their cell phones and texting while driving!

There still remains the question as to whether they really were, in fact, asleep or now have hatched a new, still hard to believe cover story about being totally absorbed in their laptop computers, which is also against regulations. Stay tuned.

This entry was posted in Rag Bloggers and tagged Aviation, FAA, Transportation. Bookmark the permalink.