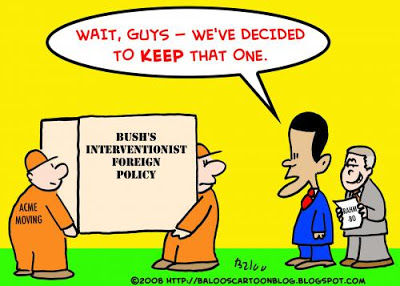 While the political philosophy articulated or implied by President Obama is far from that of the neo-conservatives, [many of the] concrete policies that he has embraced do in fact resemble Reagan/Bush era policies.

Last January Jonathan Clarke, co-author of America Alone: The Neo-Conservatives and the World Order, posed a question to readers of BBC News: “With the Bush Administration about to recede into history, a widely asked question is whether the neo-conservative philosophy that underpinned its major foreign policy decisions will likewise vanish from the scene.”

While Clarke tended to believe the answer to the question was “yes,” he did warn that pundits had predicted the end of neo-con influence when President Reagan left office as well.

Years earlier I had labeled the neo-conservative foreign policy advocates the “globalists.” They were committed to an unbridled use of force to transform the world in the political, military, and economic interests of the United States. The doctrine of preemption epitomized this approach to the world. In his National Security Strategy document of 2002, and elsewhere, President Bush asserted the right to engage in military action against nations and/or groups that the United States perceived as a threat. The days of deterrence were over. The United States was prepared to act first.

While globalists dominated United States foreign policy off and on for the last 30 years, they have been challenged by foreign policy influentials I have called the “pragmatists.” Even though both the globalists and pragmatists are driven by the needs of capitalist expansion, the pragmatists see the world as much more complex and demanding of a variety of approaches to other countries and peoples.

Globalists are committed to acting unilaterally while pragmatists are multilateralists; that is they prefer to act in coalition with other nations. Pragmatists regard diplomacy as an important tool for relating to other nations, even when others are enemies.

Whereas globalists are militarists, pragmatists regard the use of the military as a last resort. And when pragmatists endorse the use of violence to achieve particular goals they choose subversion and small wars over big ones. Pragmatists regard international organizations as a site for diplomacy, coalition-building, and engaging in behaviors designed to communicate respect rather than disdain for others. And finally, pragmatists usually embrace deterrence, rather than preemption, as their military doctrine.

Reflecting on Barack Obama’s first year in office we can see evidence of these two kinds of influences on his policymaking. Obama evidenced pragmatism in his performance at the first G20 meeting in London last spring. He engaged in public and private diplomacy and seemed to hear demands from the Global South about increasing its representation in the International Monetary Fund and World Bank. At the G20 meeting and elsewhere in his travels he admitted that the United States is responsible for some of the world’s problems.

Shortly after G20, Obama met with leaders of Western Hemisphere countries and was caught on camera shaking hands with Hugo Chavez of Venezuela. In addition, he lifted some Bush era restrictions on the rights of Cuban Americans to travel to the island to visit relatives and increased the amount of money relatives could send to Cuba.

Regarding the Middle East and Persian Gulf, Obama demanded that the Israeli government halt construction of settlements in the occupied territories and began modest troop reductions from Iraq as part of a phased withdrawal. The President initiated some dialogue with the regime in Iran over the latter’s nuclear program.

In addition pragmatist Obama condemned the military coup in Honduras. And he canceled construction of a US missile shield in Eastern Europe.

However, the President has embraced a variety of policies that resemble those of his predecessors. He committed the United States to establishing seven U.S. military bases in various parts of Colombia. This projected military presence has been coupled with strong words critical of the regime in Venezuela. Despite growing expectations, the Obama administration has not publicly demanded an end to the embargo of Cuba nor has his government acted to reverse the sentences of the Cuban 5. No significant action has been taken to insure that those who carried out the coup against President Zelaya step down. In fact, the administration has declared that it will respect the recently completed Honduran election.

The Obama administration seemed to reduce the pressure it originally applied to Israel about the occupied territories and ongoing violence against the Palestinian people. There still is a large U.S. troop presence in Iraq. Defense Department budget requests continue to rise (despite a few publicized cases of contract cancellations for individual weapons systems).

Finally, President Obama last week announced a substantial increase of some 30,000 U.S. troops to Afghanistan. He claimed that it was necessary to eliminate Al Queda from Afghanistan (even though there are less than 100 in the country) and keep the Taliban from power, even though the current Afghan regime is riddled with corruption and the eight-year war resembles the quagmire that was the Vietnam War.

While the political philosophy articulated or implied by President Obama is far from that of the neo-conservatives, these concrete policies that he has embraced do in fact resemble Reagan/Bush era policies. The language the current president uses to defend these policies does not have the apocalyptic and zealous quality that his predecessors utilized, but the consequences for targets of war and U.S. military personnel are the same.

Perhaps the Obama foreign policy can best be described as a “hybrid globalist/pragmatist” approach. The first task of those committed to peace is to demand of the new president that he reverse, not shift toward, the policies of his predecessor.

4 Responses to Obama Administration : Growing Influence of the Neo-Cons