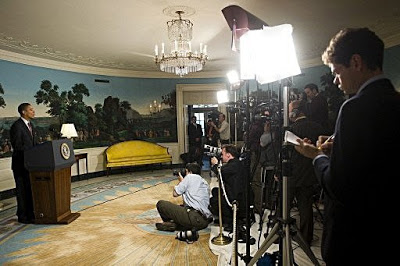 President Obama discusses talks with Iran in Geneva, at White House Oct. 1, 2009. Photo by AFP.
Is Obama putting Ahmadinejad on the defensive?
The complex question of Iran’s nuclear plans

Neo-con pundits demand regime change in Iran. Israeli president Bibi Netanyahu makes no secret of his hopes to bomb, bomb, bomb Iran in 2010. And many in the left-leaning blogosphere accuse Washington of making phony claims that yet another Middle Eastern country is moving toward weapons of mass destruction. But a closer look suggests that Barack Obama may be playing a nuanced game that could severely restrict Iran’s capacity to build nuclear weapons.

Start by asking the telltale question: Do the Iranians have a program to build a bomb? In a November 2007 National Intelligence Estimate, the U.S. intelligence community concluded “with high confidence that in fall 2003, Tehran halted its nuclear weapons program.” But British, French, German and Israeli spy-masters have increasingly come to believe that American intelligence got it wrong and that the Iranians either restarted or never stopped their efforts to design a nuclear warhead.

The dispute, often quite heated, revolves in part over test data, reports, diagrams, videos and other documentation that the media mistakenly calls “the laptop.” According to the highly-respected Institute for Science and International Security (ISIS), German intelligence had recruited an Iranian agent who passed the documentation to his wife just before the Iranian government arrested him. He is believed to have died in custody, but in 2004 his wife smuggled the information into Turkey, where she gave it to U.S. authorities.

The IAEA has repeatedly asked the Iranians about the information, but has not given them copies of the documentation itself in order to protect where it came from. The Iranians claim it is all a forgery and have refused for two years to answer the IAEA’s questions about the underlying information.

Several senior staff-members at the International Atomic Energy Agency believe the documentation to be authentic and cited it along with other information in a secret working report titled “Possible Military Dimensions of Iran’s Nuclear Program.”

The ISIS website has published portions of the report, which concludes that the Iranians have the know-how to put a workable nuclear warhead into one of their Shabab 3 missiles. The Associated Press wrote about the report on September 17, and the Sunday New York Times headlined it on October 4.

The report remains an unfinished document, and the IAEA’s outgoing director-general, Nobel Peace laureate Mohammed ElBaradei, has argued strongly against its release. But, the publicity surrounding the report raises damning questions that Iranian negotiators will have difficulty evading.

Which brings us to a second question: Did the Iranians try to conceal their enrichment facility near the holy city of Qom, as Obama accused them of doing?

Iran’s president Mahmoud Ahmadinejad and his defenders argue that he fulfilled his legal commitment to the IAEA by reporting the plant’s existence on September 21, which was more than the required six months before introducing nuclear materials into any new facility. Iran had agreed to give this standard six-month notification when it signed its original safeguards agreement with the IAEA.

The Obama administration and Dr. ElBaradei say no, Iran subsequently agreed to notify the IAEA of any new enrichment facility when they first decide to build it. This was in the “additional protocol” or “modified Code 3.1” that Iran signed in December 2004.

The legal dispute arises because Iran never formally ratified the new agreement and withdrew its promise to observe it in March 2007. Former weapons inspector Scott Ritter and others argue that this absolved Iran of any legal obligation to report the Qom plant before it did. The IAEA’s ElBaradei, normally a good friend of the Iranians, believes that they had no legal right to withdraw their promise to the IAEA and were “on the wrong side of the law” in not reporting the Qom plant from the start.

Whoever has the better legal argument, the lack of transparency on the Qom plant added to suspicions that the Iranians were looking to turn their legal stockpile of low-enriched uranium into high-enriched uranium for weapons. They could do this simply by withdrawing from the Nuclear Non-Proliferation Treaty and IAEA inspections, which they have threatened to do.

The U.S. intelligence community appears to have had this in mind in their 2007 National Intelligence Estimate, when they determined “with moderate-to-high confidence that Tehran at a minimum is keeping open the option to develop nuclear weapons.” Should it decide to exercise that option, the NIE declared, “Iran probably would use covert facilities — rather than its declared nuclear sites — for the production of highly enriched uranium for a weapon.”

By dramatically “revealing” the Qom enrichment plant only days after Tehran reported it to the IAEA, Obama put the Iranians on the defensive, which the Americans and their allies probably intended. Happily, Tehran responded by quickly agreeing to accept IAEA inspections starting on October 25, which should help move their nuclear program into greater transparency and make any secret bomb-making a great deal more difficult.

[A veteran of the Berkeley Free Speech Movement and the New Left monthly Ramparts,Steve Weissman lived for many years in London, working as a magazine writer and television producer. A former senior editor at Truthout, he now lives and works in France. For previous articles by Steve Weissman on The Rag Blog, including those about Iran and the “Green Revolution,” go here.]

This entry was posted in Rag Bloggers and tagged Ahmadinejad, Iran, Nuclear Weapons. Bookmark the permalink.