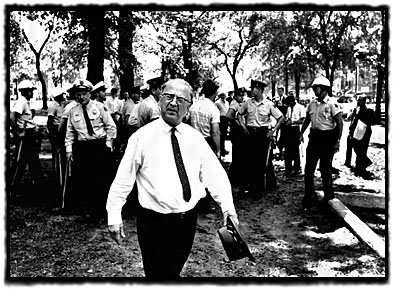 Birmingham Police Commissioner Eugene (Bull) Conner called out the dogs on civil rights demonstrators in 1963. Surely he wouldn’t have been included under President-elect Barack Obama’s umbrella.
‘Using an evangelical mega-church fence-straddling homophobe and anti-abortion champion to offer an inaugurating prayer as he takes the reins of leadership of America is a political cop-out.’
By Larry Ray / The Rag Blog / December 19, 2008

OK, a real short line or two here from the gut. Barack Obama proposes to, “. . . build relationships with people of opposing views, and wants his inaugural to reflect that goal.” So, I have to ask, if he had been running for president in the 60’s would he have presented such a seemingly equalizing forum to Bull Conner, Bubba and Billy Bob in Jackson, Mississippi and the followers of George Wallace so we could all somehow get along better?

If this is a preview of Obama’s idea of consensus building and healing, I must wonder if his ideas for improving other things are going to be this delusional and divisive. Using an evangelical mega-church fence-straddling homophobe and anti-abortion champion to offer an inaugurating prayer as he takes the reins of leadership of America is a political cop-out. Is he is trying to build a bridge from reason and acceptance to homophobes and haters with some two-moves-ahead chess ploy to the Right? I fear he has just run off the road big time before his motorcade even gets started. After all the A+ moves the Obama campaign has made from its beginnings to just a day or so ago, this has to be the most mistaken, confusing and contradictory. Why? Where does the politically expedient pandering stop? What am I missing here? Short change we can believe in?