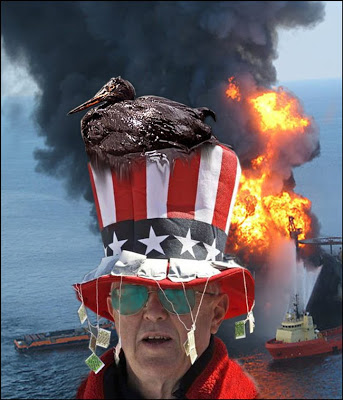 Photo montage by Larry Ray / The Rag Blog.
Deregulate this!
Oil, politics, and the Tea Party

I must ask the tea-bag draped folks who insist our government should take a hands-off approach to ‘their lives’ what their reaction is to the increasing disaster along the coastline where I live.

GULFPORT, Mississippi — The black and white logic of “Tea Party” rage with placard-waving people demanding the U.S. government stay out of their lives has suddenly taken on a new color … a multi-hued rainbow sheen.

Nightly video of the uniquely American goofiness of angry folks dressing up in silly hats draped with tea bags calling for an end to government regulation has basically dropped off the nation’s TV screens. The weak metaphor of tea bags was replaced almost overnight with the real-life drama of an out of control sub-sea oil well blowout belching a thick, noxious layer of oil up to the surface of the Gulf of Mexico some 40 miles off Louisiana.

This past April 20th as angry “don’t tread on me” gatherings were demanding government do less regulating, a barely regulated petroleum giant, BP, was reportedly demanding hurried up completion of a deep sea exploratory well a mile beneath its leased drilling rig. We now hear that BP’s hubris in pushing to cut costs and boost profits literally blew up in their faces.

Eleven workers died as the Deepwater Horizon became a floating inferno fed with oil and natural gas from an uncontrollable high pressure well blowout. The unthinkable had happened with fail-safe devices failing at all levels turning the drilling rig into an unquenchable fireball which eventually toppled and sank to the sea floor five thousand feet below.

Today marks 53 days that an estimated 25,000 to 30,000 barrels of oil a day from the well blowout has befouled the Gulf of Mexico waters. By now BP has finally stopped most of their their denials, low-ball estimates and promises that a jury-rigged connecting pipe was “capturing the vast majority” of the oil. Clearly, PR gambits could not keep the oil off the beaches of the Gulf South, or off untold numbers of helpless birds and marine life. It is hard to not see the ugly evidences of a million and a half barrels of oil stretching from Louisiana to Florida … no matter how much dispersant you spray on it.

This is a marine environmental catastrophe the likes of which the United States has never faced, and it it promises to only get worse as it drags on into the Fall as relief wells will attempt to stop the blowout.

President Obama has been portrayed by the Tea Party folks as a “socialist” for thoughtfully beginning to overhaul and reactivate regulatory agencies across government. Departments that have basically done nothing except the bidding of the U.S. Chamber of Commerce and lobbyists for giants of industry like BP for more than a decade are finally getting new marching orders. Unfortunately the disgraced Minerals Management Service with its Bush era staffing had not had their house cleaning yet and had allowed BP to skip past major environmental requirements.

I must ask the tea-bag draped folks who insist our government should take a hands-off approach to “their lives” what their reaction is to the increasing disaster along the coastline where I live. We don’t see the funny hats and tea bags and self-righteous placards down here any more. Any blame game is long over, replaced by a scramble by hard working people and businesses dependent upon the Gulf just to make it day to day.

If anything, there is a quiet, resigned realization here that while BP is being held responsible for picking up the huge tab for the mess they have made, no one genuinely expects this huge corporation will ever pay up in full. They most certainly will tie up their legal responsibilities in the courts for years and years while we face dealing with the unimaginable long term damage they caused.

As we clean up the mess here, there are lessons to be learned from Valdez, Alaska where, twenty years later, their shores are still polluted from the Exxon Valdez tanker spill and once vital fishing industries have vanished.

To help understand the size of our disaster, the amount of the Valdez spill is now being released into the Gulf of Mexico every 8 to 10 days. This ain’t no tea party.

2 Responses to Oil and Politics: Reality Comes Home to Roost