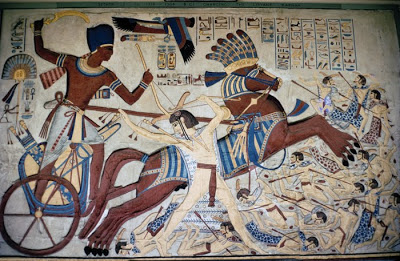 The Pharoah’s chariot army drowned in the Red Sea.
Do our ‘chariots’ impoverish us?
Does the flag condone murder?

The end of Pesach is said to mark the anniversary of the moment when Pharaoh’s imperial horse-chariot army met disaster in the Red Sea. Just as the festival was ending this year, flashes of truth about our own imperial army appeared in the ways prophetic truth rises up in our day — unveiled videotape, unmuzzled journalism. One from the Iraq War, one from the Afghanistan War.

Is there more of a connection than this seeming accident of dates? Stay tuned, below.

In one of these flashes of truth, a U.S. airplane (July 2007) machine-guns two journalists — and even if you think the U.S. soldiers honestly mistook a camera for an assault rifle and mistook civilians casually strolling on the street for threats to the American occupation, that does not explain why they then killed two clearly unarmed men in a clearly unarmed van who came to help those wounded in the first attack. Nor does it explain why the military realized something had gone wrong, investigated, and then lied about what had happened.

In the other, U.S. “Special Forces” (February 2010) killed three Afghan women — two of them pregnant — and a local police chief and prosecutor, all on the way to a baby shower. Says The New York Times, “It was one of the latest examples of Special Operations forces’ killing civilians during raids, deaths that have infuriated Afghan officials and generated support for the Taliban despite efforts by American and NATO commanders to reduce civilian casualties.”

Then the Special Forces tampered with the evidence to hide what they had done, claiming that the three women had been murdered earlier, by their relatives, in an “honor killing.” (Everyone knows that’s what Muslim men do to their women. “Baby shower”? Only loving Western families do that.)

Once more, twice more, the official position will be that these are unfortunate byproducts of necessary wars.

They are not. If the killers were not waving U.S. flags, they would be called murderers. Terrorists. Terrorizing civilians to achieve political change.

They are also the inevitable results of an American mindset that has sent U.S. troops and mercenaries and military bases throughout the world, and devoted between 880 billion dollars and 1.03 TRILLION dollars a year — as much as all other governments combined — to the U.S. military budget.

Details: For the 2010 fiscal year, the President’s base budget of the Department of Defense rose to $533.8 billion. Adding spending on “overseas contingency operations” brings the sum to $663.8 billion.

When the budget was signed into law on October 28, 2009, the final size of the Department of Defense’s budget was $680 billion, $16 billion more than the President had requested. Adm. Mike Mullen, the chairman of the Joint Chiefs of Staff, expected an additional supplemental spending bill, possibly in the range of $40-50 billion, by the Spring of 2010 in order to support the wars in Iraq and Afghanistan. Military-related expenditures outside of the Department of Defense constitute between $216 billion and $361 billion in additional spending, bringing the total for military spending to between $880 billion and $1.03 trillion in fiscal year 2010.

(These summaries, and a far more detailed analysis with detailed official sources come from here.)

While American schools rot, while our sewer mains crack, while our bridges fall, while our budgets for art, music, theater are slashed, while our autos speed and even our trains creak along burning oil and coal to send still more CO2 into the atmosphere to scorch our planet and give asthma to our children.

Deliberately, I do not use the words “defense budget.” This is not defense. It destroys others, and ourselves.

Increasingly, we hear talk about cutting the “entitlement” budget to reduce the monstrous deficits that allegedly may haunt our grandchildren. What are these “entitlements”?

But the one “entitlement” we must not even mention cutting is the military.

Our own empire is eating us alive. It is a cancer, eating up the body that feeds it.

What does this have to do with religion, with spirituality, with Torah or Islam or mindful meditation or Easter or Pesach?

Murdering pregnant women and tampering with the truth are sins as well as crimes. Murdering civilians who are desperately trying to save the lives of wounded journalists is a sin as well as a crime.

Is it necessary to quote Dwight Eisenhower once again? “Every gun that is made, every warship launched, every rocket fired, signifies in the final sense a theft from those who hunger and are not fed, those who are cold and are not clothed.”

Is this a new idea? Not hardly. The Torah (Deut. 17:16) draws on the story of slavery in Mitzrayyim — geographically, Egypt; linguistically, the Tight/ Narrow Place — to teach that no Israelite king may “send the people back into Mitzrayyim” — forced labor, poverty, despair — “in order to pay for him to buy horses for his Army.”

Those thefts that Eisenhower and the Torah mention — not just the murders recorded in secret videotapes — are sins as well as crimes.

The Flag must not hide, condone, justify those sins, those crimes.

It is time for the American public, for sure including and ideally led by its religious communities, to subject these crimes, these sins, to what we used to call God’s judgment, and our own — and to strip away the mindset, and the decisions that make them happen.

The American people can be “defended” by a military budget far smaller than a trillion dollars a year. And our country can be made healthier, more productive, freer, happier, if we spend most of that money in other ways.

I usually end these letters by saying, “Blessings of shalom, salaam, shantih — peace.”

3 Responses to Rabbi Arthur Waskow : Does the Flag Condone Murder?