Richard Raznikov : The Privatization of Everything 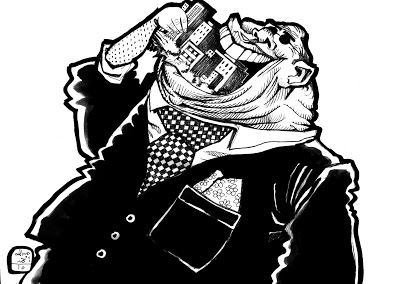 Gobbling up the Commons. Cartoon by Ahmed Abdallah / 3arabawy.
On the verge:
The privatization of everything

Does anyone have to ask what happens to law enforcement and the judicial system once the state agrees to keep private prisons at 90% of capacity?

No society can aspire to democracy unless it maintains an unbreakable connection between its politics and its police powers.

Once the populace has no political access to policy and enforcement, once those with coercive power over others are not directly accountable to the people’s representatives, you can kiss your ass goodbye.

As David Foster Wallace remarked, the truth will set you free but not until it’s finished with you.

All across the western world, there is enormous pressure being brought to “privatize” everything. Where does this pressure come from? On whose behalf? What does it mean? What is the connection between the demands for “privatization” in Greece, as part of an “austerity package” initiated by the International Monetary Fund, with the “privatization” of prisons in Florida and other states of the U.S.? Is there one?

Let’s begin with this thought: as human cultures have evolved, there has been a general agreement that some things on the planet, such as water and air, belong to everyone. Democratization has extended these rights to include access to natural beauty and to the oceans.

With various forms of democracy, even including communism and socialism, have come the acceptance that matters of common concern, however approached or regulated, are integrally connected to the political system. That is a fundamental good, since without it there is no way for the people to exercise any real power over their political environment.

If one subscribes, therefore, to democracy, one also must take with it an inviolable connection between, for example, the building of roads, and politics. Otherwise, should roads be privately built, no one could pass without paying extortionate fees. Farmers could not get their crops to market. People could not travel or visit one another. And so forth.

Severing the connection between the public and the management of and control over public resources and operations thought to be of the commons, is dangerous. It would be hard to exaggerate just how dangerous.

The issue of privatization is maybe the most important public issue we’re facing in the U.S., and it’s causing terrible dislocation and political chaos in Europe, as well. You’re not going to see it on the news (sic). As with many things in America now, this is a story we’ll have to piece together on our own.

The Corrections Corporation of America, largest company operating private prisons, has written to 48 states offering to take over the running of prisons, provided that the states guarantee a 90 percent occupancy.

The systemic corruption this invites is breathtaking.

The care of inmates is of course a responsibility of the prison systems in the states and in the country as a whole for federal institutions. How we treat inmates, provision for their food and clothing, their recreation, their activities, their health, this is a matter of public policy. The state arrests, tries, and attains convictions; inmates have been sentenced to prison. The duration of the sentence is often impacted by the behavior of the prisoner.

It should be obvious that prison conditions are subject to politics; it is politics which passes the laws and operates the judicial system. How prisons are run is our public responsibility, and this is subject to our laws.

Prisons are not meant to be, nor should they be, profit-making enterprises. They have functions to fulfill. That’s not to say that budget matters are unimportant, only that they cannot be the sole criterion for proper operation.

Otherwise, inmates would be given no services at all. Rice is cheap; rancid meat is really cheap. There would be no point worrying about rehabilitation, which can be expensive. Nobody cares what happens when they get out. Gulags give you a profit margin that would impress even Wall Street.

Government is not supposed to be a profit-making enterprise. But any governmental function, once privatized, becomes exactly that. Does anyone have to ask what happens to law enforcement and the judicial system once the state agrees to keep private prisons at 90% of capacity?

How will the national parks be run when we privatize them, as some idiot politicians are advocating? What will the nation’s coastlines be like? Years ago, California voters approved the Coastal Initiative which protected it and secured public access; if and when that promise is broken, how long before only the wealthy can enjoy the beach?

On a lighter note, how about privatizing the military? It’s being done, you know. When Obama announced the “withdrawal” of U.S. troops from Iraq he’d promised only three years before, he didn’t bother to mention that remaining behind are an estimated 50,000 private troops, a private army serving the needs of the corporate mobsters who are figuring to loot what’s left.

Xe, nee Blackwater, is a private army the government contracts with to perform certain tasks, often unspecified, which it feels the regular army cannot perform. Its soldiers are paid much more than GIs, and the casualty rate is much higher. Xe works for the U.S. or for Halliburton or Bechtel or whomever hires it. It is, as we discovered when Blackwater mercenaries murdered Iraqi civilians for pure sport, exempt from U.S. law and the control of the American government which hired it.

When private armies can operate outside the political control of a country, there is no democracy, even in form. We all know what it is, don’t we?

Privatization of water, which I wrote about recently (“As Benign as Lucifer“), has enabled major corporations to destroy wide swaths of agriculture in India and elsewhere, causing widespread suicide as farmers by the tens of thousands have lost their land. Privatization of public services, public properties, public responsibilities, is a one-way ticket to hell.

The riots in Greece are about privatization. That is the agenda of the International Monetary Fund, the consortium of bankers who run a large part of the world and want more. Through the mechanism of manufactured debt, the bankers are able to extort whatever “austerity” measures they want. These involve a reduction in the wages of public employees, a reduction in social services for the poor, and the privatization of what is publicly owned.

If you think we’re not headed in that direction in the United States, you’re dreaming. That’s what the budget arguments are about now, and the talk of America’s “debt.” To whom is that “debt” owed? Why, to the bankers, of course, the same people whose looting of the Treasury caused this crisis in the first place. Pretty neat, huh?

Having taken everything else, they are going after what’s left, and what’s left are the treasures of a nation, the wealth owned in common by its people.

We simply can’t let them get it.

4 Responses to Richard Raznikov : The Privatization of Everything