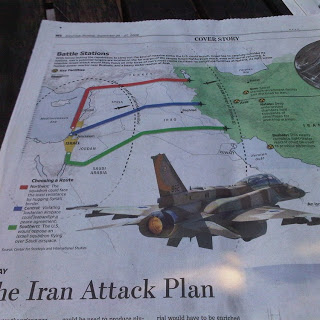 Will Israel strike? Image from Gestetner Updates.
Bombing Iran:
Will they or won’t they?

What’s the Obama Administration’s latest position on the possibility of an attack on Iran? It seems to be in flux but the White House is reported to be urging Israel not to start a war before the November elections.

Defense Secretary Leon Panetta says there is a “strong possibility” that Israel will attack Iran in either April, May, or June. The purpose would be to destroy Iran’s alleged building of a nuclear weapon, an assertion Tehran rejects, pointing to strong support for its position from authoritative American sources.

Commenting on Panetta’s report, a February 25 Associated Press dispatch declared: “An Israeli pre-emptive attack on Iran’s nuclear sites could draw the U.S. into a new Middle East conflict, a prospect dreaded by a war-weary Pentagon wary of new entanglements… with unpredictable outcomes.”

Foreign policy theorist Zbigniew Brzezinski, a former National Security Advisor to President Jimmy Carter with links to the Obama White House, told CNN Feb. 24 that if Israel attacks Iraq, “it will be disastrous for us in Afghanistan, in Iraq, in the terms of oil, but also in the Middle East more generally.”

On February 28, the AP reported that “Israeli officials say they won’t warn the U.S. if they decide to launch a pre-emptive strike against Iranian nuclear facilities.”

The U.S. is in daily communication with Israel about the matter. President Barack Obama is scheduled to hold discussions with warhawk Israeli Prime Minister Benjamin Netanyahu at the White House on March 5.

In the midst of this gathering war talk there are indications Washington does not want Israel to start a war at this juncture for several reasons:

In any event, President Obama and the entire U.S. national security bureaucracy know very well that Iran is not building a nuclear weapon.

The New York Times published a relatively sensational front page article February 25 about Iran and the bomb that was based largely on authoritative information clearing Iran of bomb-making charges.

These facts have been publicly available for five years, but because the Bush and Obama Administrations sought to minimize the significance of the bombshell reports most Americans knew little of their importance

The Times‘ headline read: “U.S. Agencies See No Move by Iran to Build a Bomb.” The article disclosed:

American intelligence analysts continue to believe that there is no hard evidence that Iran has decided to build a nuclear bomb. Recent assessments by American spy agencies are broadly consistent with a 2007 intelligence finding that concluded that Iran had abandoned its nuclear weapons program years earlier, according to current and former American officials. The officials said that assessment was largely reaffirmed in a 2010 National Intelligence Estimate, and that it remains the consensus view of America’s 16 intelligence agencies.

The article also reported on some unusually honest statements made in the last few weeks by Obama Administration officials:

In Senate testimony on Jan. 31, James R. Clapper Jr., the director of national intelligence, stated explicitly that American officials believe that Iran is preserving its options for a nuclear weapon, but said there was no evidence that it had made a decision on making a concerted push to build a weapon. David H. Petraeus, the C.I.A. director, concurred with that view at the same hearing. Other senior United States officials, including Defense Secretary Leon E. Panetta and Gen. Martin E. Dempsey, the chairman of the Joint Chiefs of Staff, have made similar statements in recent television appearances.

The fact that the Times decided to publish a front page article based on largely dated information undermining the rationale for attacking Iran evidently means the ruling elite is leaning on the White House to avoid one more war that could backfire during the election campaign.

Published in the same issue of the Times was a new statement from the International Atomic Energy Agency (IAEA) that Iran is producing additional enriched uranium inside a deep underground site — a report that the right wing Netanyahu regime distorted to signify that Iran is one step closer to creating a weapon with which to threaten the existence of Israel.

There was no proof the uranium in question was intended for any purpose other than Iran’s civilian nuclear program. Iran is working with the UN on an agreement to allow inspectors into all sites associated with the program.

Given the immense U.S. and Israeli spying apparatus inside Iran, as well as America’s extensive surveillance abilities — from spy satellites to drone flights and probable access to every telephone call and Internet message in Iran — it is significant no evidence has been collected to verify the bomb-making accusations. The 16 American intelligence agencies seem to know what they are talking about.

This does not impress war hawks in the U.S. Congress and among anti-Iranian organizations, such as the American Israel Public Affairs Committee, who are working to push Washington toward greater confrontations with Tehran. Several right wing senators introduced a bill in mid-February lowering the threshold for a U.S. or Israeli strike against Iran from making a bomb to possessing the ability to do so.

Iran insists it is not producing or about to produce nuclear weapons, and maintains that its nuclear power program is essentially in compliance with the Nuclear Non-Proliferation Treaty. Israel is known to possess at least 200 nuclear weapons and delivery systems while ignoring the treaty.

Tehran has long called for transforming the Middle East into a nuclear-free zone — a proposition opposed by both Obama and Netanyahu. Ironically, Washington is on exceptionally close terms with the three countries in possession of large nuclear arsenals that have thumbed their noses at the NonProliferation Treaty — Israel, Pakistan and India — even to the point of assisting them to maintain and update their weaponry.

In a statement February 28, Iranian Foreign Minister, Ali Akbar Salehi, declared that “We do not see any glory, pride or power in the nuclear weapons; quite the opposite.” He then referred to a religious decree issued by Ayatollah Ali Khamenei, the supreme authority within the Islamic Republic of Iran, that termed “the production possession, use or threat of use of nuclear weapons are illegitimate, futile, harmful, dangerous and prohibited as a great sin.”

United States animosity toward Iran — which has existed since America’s puppet monarch in Tehran was overthrown over 30 years ago — has nothing to do with Tehran’s alleged efforts to construct nuclear weapons. It is instead primarily based on Washington’s intention to exercise unimpeded domination of the Persian Gulf region, in which perhaps 30% of the world’s petroleum originates and is transported through the Gulf.

America has sought hegemony over the Middle East, and particularly the Persian Gulf, for several decades. This goal was a principle reason President George W. Bush decided to invade Iraq in 2003 to solidify U.S. control of the Gulf, believing a quick victory would pave the way toward toppling the government in Iran.

The Iraqi fightback and the subsequent stalemate destroyed Bush’s plans. Since Baghdad had long been Tehran’s main enemy, the only country to benefit from Bush’s neoconservative folly in Iraq was Iran.

Iran is now the principal power within the Persian Gulf region. Tehran has had a sharp rhetorical critique of the U.S., Israel, and Saudi Arabia for decades but is not using its power to threaten or attack any other country. Tehran’s military is not large, and is defensive in structure and intention.

But as long as the Islamic Republic refuses to subordinate itself to imperial Washington it remains an obstacle to America’s geopolitical ambitions, which are based on retaining global hegemony.

A main reason for the Obama Administration’s cruel and ever-tightening economic sanctions is to bring about regime-change in Iran to situate a client administration in Tehran. If this doesn’t work, the threat of military action is obviously implicit in President Obama’s mantra about “No option is off the table.”

For the immediate future, however, the White House appears to prefer sanctions, spying, and subversion to the potential unintended consequences of a U.S. or Israeli bombing attack on Iran.

3 Responses to Jack A. Smith : Will Israel Bomb Iran?