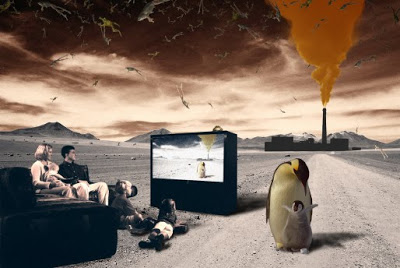 If humans were smart, we would bet on our ignorance.

That advice comes early in the Hebrew Bible. Adam and Eve’s banishment in chapters two and three of Genesis can be read as a warning that hubris is our tragic flaw. In the garden, God told them they could eat freely of every tree but the tree of knowledge of good and evil.

This need not be understood as a command that people must stay stupid, but only that we resist the temptation to believe that we are godlike and can competently manipulate the complexity of the world.

We aren’t, and we can’t, which is why we should always remember that we are far more ignorant than we are knowledgeable. It’s true that in the past few centuries, we humans have dramatically expanded our understanding of how the world works through modern science. But we would be sensible to listen to plant geneticist Wes Jackson, one of the leaders in the sustainable agriculture movement, who suggest that we adopt “an ignorance-based worldview” that could help us understand these limits.

Jackson, co-founder of The Land Institute research center, argues that such an approach would help us ask important questions that go beyond the available answers and challenge us to force existing knowledge out of its categories. Putting the focus on what we don’t know can remind us of the need for humility and limit the damage we do.

This call for humility is an antidote to the various fundamentalisms that threaten our world today. I use the term “fundamentalism” to describe any intellectual, political, or theological position that asserts an absolute certainty in the truth and/or righteousness of a belief system.

Fundamentalism is an extreme form of hubris — overconfidence not only in one’s beliefs but in the ability of humans to understand complex questions definitively. Fundamentalism isn’t unique to religious people but is instead a feature of a certain approach to the world, rooted in mistaking limited knowledge for wisdom.

In ascending order of threat, these fundamentalisms are religious, national, market, and technological. All share some similar characteristics, while each poses a particular threat to democracy and sustainable life on the planet.

Religious fundamentalism is the most contested of the four, and hence is the one most often critiqued. National fundamentalism routinely unleashes violence that leads to critique, though most often the critique focuses on other nations’ hyperpatriotic fundamentalism rather than our own. And as the prophets of neoliberalism’s dream of unrestrained capitalism are exposed as false prophets, criticism of market fundamentalism is moving slowly from the left to the mainstream.

Religious, national, and market fundamentalisms are frightening, but they may turn out to be less dangerous than our society’s technological fundamentalism.

Technological fundamentalists believe that the increasing use of evermore sophisticated high-energy, advanced technology is always a good thing and that any problems caused by the unintended consequences of such technology eventually can be remedied by more technology. Those who question such declarations are often said to be “anti-technology,” which is a meaningless insult.

All human beings use technology of some kind, whether stone tools or computers. An anti-fundamentalist position is not that all technology is bad, but that the introduction of new technology should be evaluated carefully on the basis of its effects — predictable and unpredictable — on human communities and the non-human world, with an understanding of the limits of our knowledge.

Our experience with unintended consequences is fairly extensive. For example, there’s the case of automobiles and the burning of petroleum in internal-combustion engines, which give us the ability to travel considerable distances with a fair amount of individual autonomy. This technology also has given us traffic jams and road rage, strip malls and smog, while contributing to climate destabilization that threatens the ability of the ecosphere to sustain human life as we know it.

We haven’t quite figured out how to cope with these problems, and in retrospect it might have been wise to go slower in the development of a system geared toward private, individual transportation based on the car, with more attention to potential consequences. [Jane Holtz Kay, Asphalt Nation: How the Automobile Took Over America and How We Can Take It Back (New York: Crown, 1997).]

Or how about CFCs and the ozone hole? Chlorofluorocarbons have a variety of industrial, commercial, and household applications, including in air conditioning. They were thought to be a miracle chemical when introduced in the 1930s — non-toxic, non-flammable, and non-reactive with other chemical compounds.

But in the 1980s, researchers began to understand that while CFCs are stable in the troposphere, when they move to the stratosphere and are broken down by strong ultraviolet light they release chlorine atoms that deplete the ozone layer. This unintended effect deflated the exuberance a bit. Depletion of the ozone layer means that more UV radiation reaches the Earth’s surface, and overexposure to UV radiation is a cause of skin cancer, cataracts, and immune suppression.

But wait, the technological fundamentalists might argue, our experience with CFCs refutes your argument — humans got a handle on that one and banned CFCs, and now the ozone hole is closing.

True enough, but what lessons have been learned? Society didn’t react to the news about CFCs by thinking about ways to step back from a developed world that has become dependent on air conditioning, but instead looked for replacements to keep the air conditioning running. [Stan Cox, Losing Our Cool: Uncomfortable Truths About Our Air-Conditioned World (and Finding New Ways to Get Through the Summer) (New York: New Press, 2010).]

So the reasonable question is: When will the unintended effects of the CFC replacements become visible? If not the ozone hole, what’s next? There’s no way to predict, but it seems reasonable to ask the question and sensible to assume the worst.

We don’t have to look far for evidence that our hubris is creating the worst. Every measure of the health of the ecosphere — groundwater depletion, topsoil loss, chemical contamination, increased toxicity in our own bodies, the number and size of “dead zones” in the oceans, accelerating extinction of species and reduction of bio-diversity — suggests we may be past the point of restoration.

As Jackson’s example suggests, scientists themselves often recognize the threat and turn away from the hubris of technological fundamentalism. This powerful warning of ecocide came from 1,700 of the world’s leading scientists:

Human beings and the natural world are on a collision course. Human activities inflict harsh and often irreversible damage on the environment and on critical resources. If not checked, many of our current practices put at serious risk the future that we wish for human society and the plant and animal kingdoms, and may so alter the living world that it will be unable to sustain life in the manner that we know. Fundamental changes are urgent if we are to avoid the collision our present course will bring about. [Henry Kendall, a Nobel Prize physicist and former chair of the Union of Concerned Scientists’ board of directors, was the primary author of the “World Scientists’ Warning to Humanity.”]

That statement was issued in 1992, and in the past two decades we have yet to change course and instead pursue ever riskier projects. As the most easily accessible oil is exhausted, we feed our energy/affluence habit by drilling in deep water and processing tar sands, guaranteeing the destruction of more ecosystems. We extract more coal through mountain-top removal, guaranteeing the destruction of more ecosystems. [Naomi Klein, “Addicted to Risk,” TEDWomen conference, December 8, 2010. ]

And we take technological fundamentalism to new heights by considering large-scale climate engineering projects — known as geo-engineering or planetary engineering, typically involving either carbon-dioxide removal from the atmosphere or solar-radiation management — as a “solution” to climate destabilization.

The technological fundamentalism that animates these delusional plans makes it clear why Wes Jackson’s call for an ignorance-based worldview is so important. If we were to step back and confront honestly the technologies we have unleashed — out of that hubris, believing our knowledge is adequate to control the consequences of our science and technology — I doubt any of us would ever get a good night’s sleep.

We humans have been overdriving our intellectual headlights for thousands of years, most dramatically in the twentieth century when we ventured with reckless abandon into two places where we had no business going — the atom and the cell.

On the former: The deeper we break into the energy package, the greater the risks. Building fires with sticks gathered from around the camp is relatively easy to manage, but breaking into increasingly earlier material of the universe — such as fossil fuels and, eventually, uranium — is quite a different project, more complex and far beyond our capacity to control.

Likewise, manipulating plants through traditional selective breeding is local and manageable, whereas breaking into the workings of the gene — the foundational material of life — takes us into places we have no way to understand.

These technological endeavors suggest that the Genesis story was prescient; our taste of the fruit of the tree of knowledge of good and evil appears to have been ill-advised, given where it has led us. We live now in the uncomfortable position of realizing we have moved too far and too fast, outstripping our capacity to manage safely the world we have created.

The answer is not some naïve return to a romanticized past, but a recognition of what we have created and a systematic evaluation to determine how to recover from our most dangerous missteps.

A good first step is to adopt an ignorance-based worldview, to heed the warning against hubris that appears in the most foundational stories — religious and secular — of every culture. That would not only increase our chances of survival, but in Jackson’s words, make possible “a more joyful participation in our engagement with the world.”

[Robert Jensen is a journalism professor at the University of Texas at Austin and board member of the Third Coast Activist Resource Center in Austin. He is the author of All My Bones Shake: Seeking a Progressive Path to the Prophetic Voice, (Soft Skull Press, 2009) and Getting Off: Pornography and the End of Masculinity (South End Press, 2007); Jensen is also co-producer of the documentary film Abe Osheroff: One Foot in the Grave, the Other Still Dancing, which chronicles the life and philosophy of the longtime radical activist. Robert Jensen can be reached at rjensen@uts.cc.utexas.edu. This article was also posted at The Progressive Christian.]