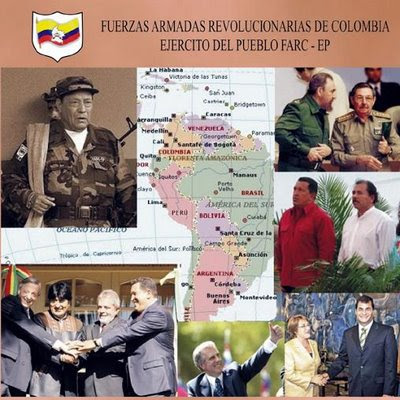 Sunday, March 2nd, I turned on the President’s television monologue-dialogue show, Aló Presidente. The nation’s leader is a charming entertainer and communicator. He sometimes gives orders to his staff on this weekly show, though rarely so dramatically as occurred today.

Chavez recounted phone conversations he had during the night of March 1st with Ecuador President Rafael Correa, whose land had just been invaded by Colombian troops, pilots and police. Their objective was not Ecuador itself but an encampment of FARC guerrillas located two kilometers inside northern Ecuador.

Raul Reyes, FARC’s second in command, and twenty-four other guerrillas were murdered, many in cold blood. Among those murdered was Olga Marin, Reyes companion and the daughter of Manuel Marulanda, FARC’s founder and leader for 40 years. The guerrillas had not been able to resist, because they were asleep, later found in their underwear, when attacked by planes from the US base Manta in Ecuador, which dropped five “smart bombs”, followed by helicopters flying in from the south of Colombia. Several of them were shot in cold blood directly in the back of the head or face as was the case with Reyes and Julián Conrado, the only cadavers taken to Colombia in a police helicopter. The other persons were found by Ecuadoran troops in the coming hours. Three wounded persons, who were able to hide, were found and gave eye-witness testimony to their rescuers and to an OAS (Organization of American States) investigation team, which later came to the area. Among the dead and wounded were five Mexican students, who were not guerrillas.

President Chavez told the nation that Uribe had lied about the operation to Correa, whom he telephoned after its “success”, as Uribe viewed the blood bath.

“Uribe is a lying lackey of the US Empire, a mafiosa, a criminal supporting para-militarist assassins and a narco-trafficker. He doesn’t want peace.”

[Uribe did nothing to aid the process of returning four captured Colombian congresspersons, which FARC had unilaterally released just two days before this horrible massacre.]

”Uribe operates in the style of Israel, converting Colombia into the key arm of US interests in Latin America just as Israel is in the Middle East.

“We won’t tolerate this and we must protect our borders against this satellite. Correa has broken diplomatic relations and moved troops to the border. Correa can count on us. Generals, send ten battalions with tanks and aircraft to our border with Colombia!”

In the upcoming investigations by Ecuador, Venezuela and OAS we learned that Operation Phoenix, as the Uribe-US plan was named, used technology not possessed by any Latin America country and which had disclosed where Reyes group was hiding. Army and police units from Colombia cooperated with Ranger army units of the United States operating out of its Manta base. Manta had been used during eight years against Colombian peasants and their armed forces, FARC, as part of the billion dollar-a-year Plan Colombia extermination operation. At least 50,000 Colombians—mostly civilians—had been killed in Plan Colombia’s eight-year operation. And 300,000 had been forced to flee their homes into the welcoming arms of Venezuela. They live there with the same rights and benefits as citizens, just as do all three million Colombian immigrants.

President Correa declared that he will not renew the Manta contract at the end of 2008.

In these days, I witnessed intense concern in La Victoria about a possible war, a subject that embraced everyone across the nation. Just after Chavez’ announcement of cutting diplomatic relations with Colombia and sending troops to the border, I heard my next door neighbors yelling, “Who wants war? Chavez that’s who. It was Ecuador that Uribe violated not Venezuela. Then why mess in it?”

My neighbor across the Plaza Ricaurte park told me, “I support Chavez 100%. I’m ready to die for the fatherland. But I’m tired, tired of the oligarchy, the corruption within the Chavez government, tired of all the waiting. I want it all to end. It’d be better to declare war and get it over with.”

This park contained many opinions. There were those who applauded Chavez’ action and hoped it would prevent Bush-Uribe from testing Venezuela’s will to defend its revolution by sending provocative bullets across the long border, not possible to close off entirely. Then there were the young men with fancy cars and motor cycles who could care less about anything else. As one neighbor described them, “They play with life and wait for capitalism to return in full.”

Both Chavez and Correa had been patient, too patient many militant revolutionaries maintained, with Bush-Uribe provocations. Chavez reminded us of occasions when Colombian soldiers and para-militarists had been captured on Venezuelan soil. They were preparing sabotage and murder, hoping to start a war. Para-militarists sold drugs and pistols to young inane gangsters, hoping to destabilize the government. After some arrests and a short time in prison, Chavez had agreed with Uribe to return them to Colombia. Correa told the world that he had been patient with Uribe too. His troops has found several small FARC camps and turned them away. Colombian soldiers had crossed into Ecuador five times between February 2007 and January 2008. And now this massacre.

During this tense week, Uribe’s generals claimed they had found three computers among Reyes possessions. Miraculously, they were the only material left untouched by the “smart bombs”, and they allegedly showed that Chavez had financed FARC with $30 millions. They also claimed that Correa’s people were cooperating and trading with FARC. Correa answered that his emissaries, and Chavez’, were on the verge of accomplishing final negotiations for the number one held prisoner, Colombian politician Ingrid Betancourt. Chavez had served as the principle international negotiator in two prisoner releases by FARC. These seven released prisoners, and Betancourt’s mother, all praised Chavez for his humanitarian efforts on television.

Meanwhile in Bogota, the cadaver of Reyes was placed on public display. A newspaper photograph showed a boy hitting his hanging body with a bat while his father stood proudly behind him.

VEA newspaper ran a photograph of a Coca-Cola worker in Venezuela wearing a t-shirt with the words: Don’t Drink Coca-Cola. Although there is no grass roots boycott of Coca-Cola in Venezuela, as there is in Colombia, India, USA, UK and other lands, there is general knowledge that Coca-Cola companies inside Colombia pay death squads to murder workers who try to organize a union, struggling for decent conditions. In fact, Coca-Cola is on trial in Miami for doing just that: murder. Chiquita banana had to pay a $25 million fine for hiring death squads to murder its workers in Colombia. No one went to prison, of course. And Bush-Uribe talk of democracy, accusing Chavez and Correa of financing and cooperating FARC, which the Coca-Cola/Chiquita bosses and their politicians contend are “terrorists”. The devil claims God is the devil.

Just as the Venezuelan troops had settled in at the border, Chavez ordered them home. A week had gone by since the massacre in Ecuador. OAS had met about the conflict and so had the 20-nation member Rio Group. Even before OAS’ investigation was completed, these bodies expressed unanimous agreement that what Uribe did was wrong. They simply needed to read aloud what is written in all the agreements of these bodies, the United Nations and all other international agreements. It is unlawful for any nation to invade another without the agreement of international bodies, namely the UN or OAS, or if not acting in defense of an armed attack by forces of another government.

Uribe said he was sorry and wouldn’t do it again.

Chavez called this a great victory for all of Latin America and a great defeat for the US Empire. Fidel did the same in his reflection writings. Correa was a bit less optimistic and somewhat taken aback when he saw Chavez embrace the “lying, murderous, criminal…” and then call Uribe to be his “brother” and “friend” a week later.

As the media was proclaiming that calm had returned, another leader of FARC was murdered, this time by a compatriot hired by the Colombian army. Pablo Montova turned on his leader, Iván Rios, killing him and his female companion and then cutting off one of Rios’ hands, which he turned over to the army as proof of his ugly deed. He was to receive $2.6 million for these murders, and the security, according to him, that the army would not murder him and his female companion. Although the death penalty is legally prohibited in Colombia, the government fulfilled its promise of paying the hired killer.

This occurred at the same time that unionists in Colombia and progressives conducted a peaceful march in Bogotá. They sought an end to the internal war and the corrupt Uribe government. Dozens of Uribe’s staff and ministers, connected to narco cartels and para-militarists, had been condemned and even sentenced to prison by a sometimes independent attorney general and Supreme Court. Within three days of this march, three unionist leaders of the protest were murdered, and one had been tortured prior to death.

In the middle of March, Marulanda died of a heart attack. FARC did not announce this, however, for two months. Half of FARC’s seven-man leadership was now dead. It had lost several thousands of its 17-20,000 forces in the past year; some had deserted; hundreds were held in torture chambers called prisons—none of whom Uribe was willing to trade for FARC’s well treated prisoners. This was not the moment to back away from FARC but that is what Chavez, and then Fidel, did. In a speech, April 12, Chavez called upon Marulanda (not then known to be dead) to unconditionally release all of their 50 prisoners. In July, Chavez went further and told FARC to put down their weapons and rejoin legal political life. He had always pointed out before that this would not be possible because the government would murder them, just as it did in the 1980s when 4000 of FARC’s people were murdered after they gave up their weapons and entered the political process. Just after this discouraging speech, Chavez met with Uribe in Caracas to discuss cooperation against drug-trafficking. Fidel added his most respected voice: turn over all your prisoners without conditions, but don’t turn over your weapons. Take France’s offer for refuge.