Keeping the Panic Pressure On 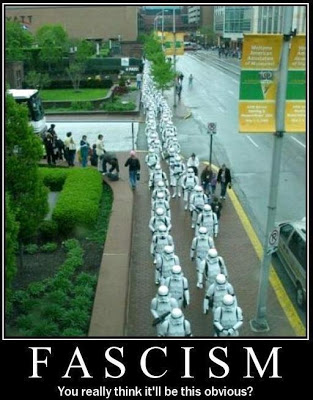 Thousands of Troops Are Deployed on U.S. Streets Ready to Carry Out “Crowd Control”
By Naomi Wolf / October 8, 2008.

Members of Congress were told they could face martial law if they didn’t pass the bailout bill. This will not be the last time.

Background: the First Brigade of the Third Infantry Division, three to four thousand soldiers, has been deployed in the United States as of October 1. Their stated mission is the form of crowd control they practiced in Iraq, subduing “unruly individuals,” and the management of a national emergency. I am in Seattle and heard from the brother of one of the soldiers that they are engaged in exercises now. Amy Goodman reported that an Army spokesperson confirmed that they will have access to lethal and non lethal crowd control technologies and tanks.

George Bush struck down Posse Comitatus, thus making it legal for military to patrol the U.S. He has also legally established that in the “War on Terror,” the U.S. is at war around the globe and thus the whole world is a battlefield. Thus the U.S. is also a battlefield.

He also led change to the 1807 Insurrection Act to give him far broader powers in the event of a loosely defined “insurrection” or many other “conditions” he has the power to identify. The Constitution allows the suspension of habeas corpus — habeas corpus prevents us from being seized by the state and held without trial — in the event of an “insurrection.” With his own army force now, his power to call a group of protesters or angry voters “insurgents” staging an “insurrection” is strengthened.

U.S. Rep. Brad Sherman of California said to Congress, captured on C-Span and viewable on YouTube, that individual members of the House were threatened with martial law within a week if they did not pass the bailout bill:

“The only way they can pass this bill is by creating and sustaining a panic atmosphere. … Many of us were told in private conversations that if we voted against this bill on Monday that the sky would fall, the market would drop two or three thousand points the first day and a couple of thousand on the second day, and a few members were even told that there would be martial law in America if we voted no.”

If this is true and Rep. Sherman is not delusional, I ask you to consider that if they are willing to threaten martial law now, it is foolish to assume they will never use that threat again. It is also foolish to trust in an orderly election process to resolve this threat. And why deploy the First Brigade? One thing the deployment accomplishes is to put teeth into such a threat.

“If the President directed the First Brigade to arrest Congress, what could stop him?”

“Nothing. Their only recourse is to cut off funding. The Congress would be at the mercy of military leaders to go to them and ask them not to obey illegal orders.”

“But these orders are now legal?'”

“If the President directs the First Brigade to arrest a bunch of voters, what would stop him?”

“Nothing. It would end up in courts but the action would have been taken.”

“If the President directs the First Brigade to kill civilians, what would stop him?”

“What would prevent him from sending the First Brigade to arrest the editor of the Washington Post?”

“Nothing. He could do what he did in Iraq — send a tank down a street in Washington and fire a shell into the Washington Post as they did into Al Jazeera, and claim they were firing at something else.”

“What happens to members of the First Brigade who refuse to take up arms against U.S. citizens?”

“They’d probably be treated as deserters as in Iraq: arrested, detained and facing five years in prison. In Iraq a study by Ann Wright shows that deserters — reservists who refused to go back to Iraq — got longer sentences than war criminals.”

“Does Congress have any military of their own?”

“No. Congress has no direct control of any military units. The Governors have the National Guard but they report to the President in an emergency that he declares.”

“Who can arrest the President?”

“The Attorney General can arrest the President after he leaves or after impeachment.”

[Note: Prosecutor Vincent Bugliosi has asserted it is possible for District Attorneys around the country to charge President Bush with murder if they represent districts where one or more military members who have been killed in Iraq formerly resided.]

“Given the danger do you advocate impeachment?”

“Yes. President Bush struck down Posse Comitatus — which has prevented, with a penalty of two years in prison, U.S. leaders since after the Civil War from sending military forces into our streets — with a ‘signing statement.’ He should be impeached immediately in a bipartisan process to prevent the use of military forces and mercenary forces against U.S. citizens”

“Should Americans call on senior leaders in the Military to break publicly with this action and call on their own men and women to disobey these orders?”

“Every senior military officer’s loyalty should ultimately be to the Constitution. Every officer should publicly break with any illegal order, even from the President.”

“But if these are now legal. If they say, ‘Don’t obey the Commander in Chief,’ what happens to the military?”

“Perhaps they would be arrested and prosecuted as those who refuse to participate in the current illegal war. That’s what would be considered a coup.”

This entry was posted in RagBlog and tagged Bank Bailouts, Bankruptcy, Police State. Bookmark the permalink.

1 Response to Keeping the Panic Pressure On