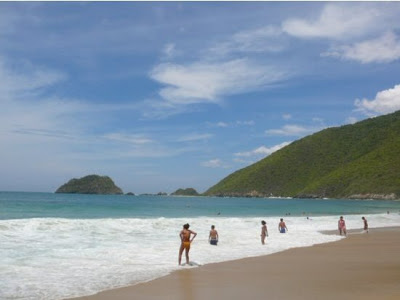 Diego insisted that I take a relaxing trip to a resort area for ordinary Venezuelans called, Ocumare de la Costa, before I should leave. I must see and do something else than politics. He’d accompany me on the bus. Relaxing it wasn’t. The curves winding up a jungle mountain last for an hour as head and stomach sway. Some people can’t repress their breakfast from spewing over the bus floor. Although the distance from La Victoria is just 100 kilometers, it took three and one-half hours in two buses. But it was worth the dizzy ride.

Nothing fancy about the beaches or the small town of 10,000 inhabitants. The most talked about feature is the new therapeutic hospital with Cuban doctors. There are plenty of liquor stores, cafes serving beer, rum and fish, and lottery gambling stalls, which also sell bets on horse races. Profits go to government supported programs.

At one of the beachfront cafes, Diego asked around for a decent and inexpensive hotel for me. A local man guided us to Restaurant Los Nonnos, an Italian restaurant with a guest house. I was the only guest in this house spacious enough for eight persons. I had use of the kitchen and a good double bed.

Diego did not want to stay after our fish soup lunch. He did not care for swimming and he wanted to rejoin his lover for the weekend. So he returned and I went for a swim. The salt water felt good on my skin. I stayed inside the reef, which crossed parallel to the beach about four hundred meters out, stretching from large boulders spilled into the sea from the mountain range. Cata beach is thus enclosed. At peak times about 100 people were on the beach. Most are fearful of the small waves and do not bathe unless the water is calm. This is not a surfers’ beach nor is it an environmentalist haven. Trash lay everywhere despite several trash barrels placed about, which remain empty or nearly so.

I walked a kilometer down the beach, skirting trash, to La Boca. Here, at The Mouth, was fishermen’s turf. There were dozens of small two-man motor boats docked or returning from the day’s fishing. They didn’t bring in many fish but each boat had a share of some of the best tasting fish in the world: dorado, aguja, bonito, pargo. The golden dorado, which weigh from 10 to 20 kilos, and the smaller red snapper (pargo) are my favorite. There were no fancy restaurants but numerous beachfront cafes or even stands that served grilled fish and cold beer.

As the sun sat glowing red, I watched the last boat return with an unusual shark. It was two meters in length. No one knew its name but one man called it “pure water”, because once cut open most of its 40 kilos proved to be nothing but water.

In the evening, I drank beer on Cata beach and watched the women. They were not bashful but were not after a quick sexual encounter either. Women in this country are definitely independent, strong, feminists without hatred of men from what I saw here and in three municipalities I explored and in three visits to Caracas. During the day, many walk on and near the beach in g-strings. Most women normally dress so that their breasts and thighs are high-lighted. But I got no sensation that their display of flesh is meant to entice men, but rather is an expression of liberty and for comfort in this sun-baked land.

The next day, the water was calm and came above the reef line. I knew it was risky but I dared myself to swim over it. Remember the dare devil boy-wants-to-be man syndrome in our youth? I haven’t quite gotten over that even when alone with no one to impress how manly I am. Maybe I do this because I don’t want to be encumbered. The open sea is most inviting, and I had my snorkel and mask so maybe I could see some large fish.

I floated cautiously over the sharp-pointed reef, about three to four meters wide and into freedom. The feeling that I can do it propels me more than common sense. After a fruitless search for fish yet having showed myself that “I can still do it at my age” I turned back toward the beach. Though the current was not strong I had neglected to take into account that ebb and flow directions make a difference. As I approached the reef the current pushed me forward. I could not control my body entirely. As I lay flat above the reef, the inward current forced my legs downward. I could only manage to resist with one, the other foot scraped upon a reef. I ignored whatever damage may have been caused and swam to the beach with decreasing lung capacity.

Once upon the sand, I saw blood running from the gash alongside my big toe. I collected my shirt and short pants and hobbled up the beach to a police station, which fortunately was no more than a couple hundred meters away. A policewoman gave me toilet paper to hold over my bleeding foot. She asked for identification but I had left it at the hotel. I only had a few Bolivars in my pocket. She and another policeman drove me the 10 kilometers to the Ocumare town emergency clinic. The hospital did not treat wounds.

I hobbled into the clinic as the police watched, ready to help if needed while respectful of do-it-yourself life approach whenever possible. There were a handful of patients but no waiting line. A nurse immediately guided me into a treatment room and the police departed. In the ensuing half-an-hour, three nurses and a doctor—all Venezuelan women—looked in on me. My foot was washed and I was given an anesthesia prior to being stitched. They all asked what had happened to my foot. Nurses, and the doctor, Dalia, about 55 years old, laughed as I explained my discovery that ocean waves and currents are stronger than my macho attitude.

Despite the anesthesia, it was still painful as Dalia sewed eight stitches through five centimeters of skin tightened over foot bone. They gave me another shot and asked me to sing. I am a terrible singer and know no songs but I managed to recall from my teenage years in Brazil a couple verses of a song about cachaza (a sugar cane pure brandy).

The medical workers appreciated my self-critique and humor. I appreciated their skill and affectionate care. After I was bandaged, the doctor had to fill out a brief form. It did not matter that I had no ID. Dalia just wrote down my name, age, the nature of injury and treatment. She wrote out a prescription against infection and swelling, and then told me:

“I love this revolution. I am a Colombian forced to flee 35 years ago. These past nine years have been most wonderful. Never before has a president cared for his people as does Chavez. He is almost too good,” she said, adding that his big heart causes some people to enshroud themselves in a sense of worthlessness.

There was no fee, not even for foreigners, and no papers for me to fill out. I later asked at a La Victoria private clinic what this would have cost: at least 100BF. I asked why people still came for private treatment when government health care was free.

“Oh, our services are better, and we are quicker. The government hospitals and clinics are not as good as private ones and they are all full,” the receptionist replied.

It was only two hundred meters from the Ocumare clinic to the pharmacy where I paid 6BF, less than $3, for the pills. Within a few minutes, I caught a taxi back to the beach town where I sat at a café table on the sand and ate the day’s catch — dorado — and drank my name. Ron in Spanish means rum.

As I watched the sun set, I felt content and wiser. Through this accident, one I unnecessarily caused, I had learned first hand how well the new health care system functions. The emergency service clinics, and the 2,700 community health centers constructed in five years, part of the Barrio Adentro Misión (Inside the Barrio Mission), has profoundly improved the health and welfare of more than half the nation not previously covered by medical care. Three thousand more health centers are under construction, according to the ministry’s August 2008 figures. True, many of the old hospitals are deteriorated and there is not uniformly accessible, excellent health care everywhere, but how can the right-wing make that an issue against the current government when they did nothing for the people’s health care when they ruled Venezuela.

Two days later, I splurged on a taxi to the airport, about a two-hour ride from La Victoria, depending on the traffic. The night before, I’d said my farewells to my new friends. Over the course of my time here they had all warned me about watching my back and my wallet. Maybe I was lucky, maybe careful enough but I was never attacked or robbed, and no one had short-changed me in the entire time.

The airport was packed, five long lines waited to pass through the first check-in. In all, our baggage was checked three times, and our persons once or twice. There were the civilian airline checkers, the customs, and the National Guard specializing in drug detection. When my flight was called and my ticket checked, I was asked to stand aside. Eventually, three young women from three countries were also standing aside. We were escorted outside near the aircraft where National Guardsmen opened our bags in our presence. We were politely told that the cameras and scanners can not always see everything in the bags so they make personal checks for drugs.

“We haven’t found anything today in this type of check. But yesterday, we confiscated 10 suitcases of cocaine destined for Mexico,” a young guardsman told me.

“You know,” he continued, “we confiscate and capture thousands of kilos every year and burn them—mostly cocaine, but also some heroin and marijuana. I wonder what President Bush would think if he knew how hard we work at stopping drug trafficking, almost all of which originates in Colombia not in our country.”

Drug free, we were boarding the plane but not before we were patted down at the entrance. Fortunately, I had put Diego’s advice into practice. I would not buy a commercial deodorant with which to swathe my armpits but I did apply a blend of lime juice and sodium carbonate, something Diego’s mother used long ago. So I did not offend the nostrils of the guards when I raised my left arm, clenched my fist and shouted the new sound of Venezuela: No volverán, the Empire and Oligarchy will not return.