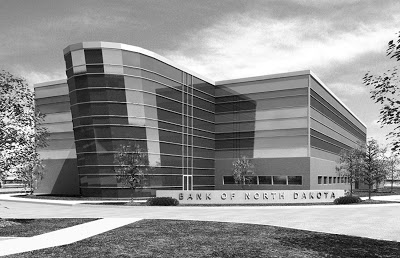 See clip from Michael Moore’s Capitalism: A Love Story, Below.

Try to find a bank president that’s beloved by supporters of the Occupy Wall Street movement. It’s not impossible. You’ll just have to travel to North Dakota.

Meet Eric Hardmeyer, who bears the unlikely distinction of being perhaps the only banker in America who, in addition to being embraced by Wall Street protesters, has been exalted by the likes of Michael Moore, Mother Jones magazine, and the Progressive States Network, among other progressive stalwarts.

That’s because Hardmeyer heads the Bank of North Dakota (BND), the country’s only publicly-owned state bank. The institution, located ironically enough in a solidly red state, has become the darling of progressives who have become frustrated with corporate banks they say helped cause the financial crisis and resulting credit crunch.

Now, state lawmakers nationwide are pushing for the North Dakota model to be replicated in their home states. Since 2010, state lawmakers in at least 16 states have introduced bills to create a state bank, something similar, or study the issue, according to a study by the National Conference of State Legislatures.

So far, momentum is slow. The movement has yet to produce another Bank of North Dakota, but advocates are hoping to raise the issue again in 2012 legislative sessions. Their pitch: publicly-owned banks can help create jobs, generate revenue for the state, strengthen small banks, and lower the cost of borrowing for local governments by offering loans below market rate.

Hardmeyer, who was named bank president in 2001, hasn’t always been such a well-known figure. But his profile has been raised over the last year — including in Bloomberg BusinessWeek — and now he regularly fields calls from state lawmakers and other officials inquiring about his institution.

“There hasn’t been a big push anywhere that I’m aware of until recently,” said Hardmeyer in a late December interview with Governing. “They’re interested in how it works, why it works, [and] what the roadblocks are.”

The bank was formed in 1919 with $2 million in bonds as a response to farmers who found they couldn’t get credit from out-of-state banks in Chicago, Minneapolis, and New York. Today, the bank helps implement state economic development programs, lends money to businesses, serves as the depository of state funds, and also functions as a “banker’s bank” that performs tasks like check clearing for smaller institutions.

Much of the renewed interest in the bank stems from the same frustration driving the Occupy Wall Street movement, and Hardmeyer’s institution has come to represent something of an anti-bank. After all, advocates argue, the best way for taxpayers to occupy a bank is to own it. Instead of being bailed out by the government, Bank of North Dakota actually pays dividends to the state that shore up its coffers. Bloomberg Businessweek reported that since 1945, it has sent $555 million to the state general fund. 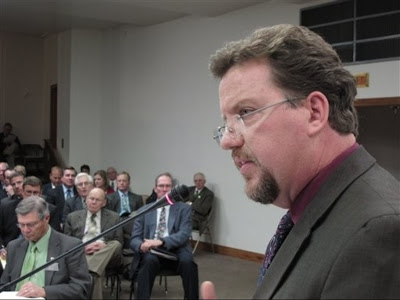 The Bank of North Dakota’s Eric Hardmeyer. Image from Firstpost.
Instead of tightening up lending in response to the recession, BND actively tries to facilitate loans that traditional banks shy away from. “With this institution [and] its mission, it comes with a higher degree risk than what a traditional bank might be willing to tolerate,” Hardmeyer said.

When floods destroyed affordable housing in Minot, N.D., last year, the bank developed programs to help finance rebuilding. And as the western half of the state struggles with strained infrastructure in the wake of an oil boom, BND programs are helping to ensure capital is flowing to fund much-needed projects.

Yet BND doesn’t operate as a charity, and its finances are remarkably strong. Bloomberg Businessweek reported that it earned a profit of $62 million in 2010 — the seventh consecutive year it turned a record profit — and it has profited every year since at least 1971.

Standard & Poor’s just increased BND’s credit rating. The returns on its assets have consistently been larger than those of similarly-sized private banks, and a smaller portion of its loans have gone delinquent, according to a report by the Federal Reserve Bank of Boston. The bank has likely benefited from more successful lending, lower costs, and its tax-exempt status.

Yet most North Dakotans’ interaction with the bank is minimal. The institution operates from a single location in Bismarck, doesn’t have ATMs, and doesn’t generally serve as a consumer bank. It lacks federal oversight, its loans aren’t insured by the FDIC, and its staff members are considered state government employees.

What it does do is partner with smaller, local banks throughout the state on various loan programs. In a typical transaction, a smaller bank would originate a loan, and BND could guarantee part of it or buy down the interest rate. The effect is that a business loan that might otherwise not have been made — or that might have only happened at a high interest rate — can suddenly be offered at a reasonable price, prompting business growth and job creation.

The main intent is for the bank to serve as an economic development tool, said Hardmeyer. It works closely with the state’s commerce department, economic development corporations, and the legislature to develop programs that serve the mission. It’s overseen by a triumvirate of state officials that include the governor, the attorney general, and the agriculture commissioner, while the legislature sets its budget.

Many BND fans see North Dakota’s economy, currently enjoying a best-in-the-country jobless rate of just 3.4 percent, and believe a similar publicly-owned bank could help fix financial problems elsewhere. But Hardmeyer himself downplays that optimism, pointing out that although his bank plays an important role in the state economy, North Dakota’s boom likely has more to do with the energy sector.

The Fed concurs: “With the possible exception of the Great Depression, BND’s contributions to stabilizing the state economy and finances appear to have been relatively minor.”

Still, advocates remain undeterred in their desire for public banks. “I’d much rather have my risk be put in a public institution than trust these bankers in Wall Street, who have proven themselves untrustworthy,” said Marc Armstrong, executive director of the Public Banking Institute, one of the issue’s leading champions.

But there are serious challenges to the creation of a new state bank. One is the initial cost of capitalizing one. Another is the opposition from existing banks. The president of the community banks’ trade association calls the model “socialistic.”

“Why don’t we just relabel the state capitols the Kremlin?” Camden Fine, president of the Independent Community Bankers of America, told Bloomberg BusinessWeek. (Ironically, the Fed wrote that BND may actually be strengthening the role of community banks in North Dakota and limiting the presence of the big banks that they often struggle to compete with.)

Meanwhile, the big banks would inevitably fight the measure, since they don’t want to lose out on the opportunity to serve as the depository for state funds. “They’re the biggest lobby ever in the history of mankind,” Armstrong said. In a conference call with activists last year, North Dakota State Sen. Tim Mathern said that if the bank didn’t exist, the state likely wouldn’t be able to create one in today’s political climate.

And there are some potential downsides to a state-owned bank. One of the greatest concerns is that a state official could somehow become involved in making lending decisions. That doesn’t happen in North Dakota, Hardmeyer insists, stressing the bank’s independence and the business-first mentality of its bankers.

Critics also say that public banks created today could disrupt the economy, since public funds would likely be withdrawn from existing commercial banks. And they cite the ever-present risk to state taxpayers of guaranteeing the deposits.

A Massachusetts commission that generated significant attention recommended against a state bank in August, citing the start-up costs, risks, and existing network of quasi-public lenders. And last year, California Gov. Jerry Brown vetoed legislation calling for a study to consider the viability of a state bank.

Yet backers of public banks remain optimistic. They argue that the concept is so different from the existing idea of banking that they it will likely take several legislative sessions for the movement to gain steam.

The DVD of Michael Moore’s Capitalism: A Love Story featured the Bank of North Dakota. A short introduction on BND’s creation is provided in this clip below.

[Ryan Holeywell is a staff writer at Governing, where this article first appeared. It was distributed by SolidarityEconomy.Net.]