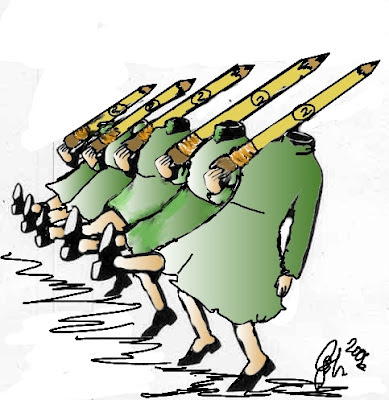 [In another rare appearance of her very occasional column, Shredding the Envelope, Sarito gets a firsthand look, among other things, at what all the fuss is about when teachers make a fuss about standardized testing and its use in evaluating both student and teacher “performance.”]

Let me first of all say that I have a whole new appreciation and respect for my sisters and everybody else I’ve ever met who are / have been teachers day in, day out, for much of their grownup lives.

Actually, I had a blast.

I didn’t have much fun in the anticipation of it. Like… “why did I pick up that call when the phone rang?” And once I’d picked it up, why did I just say yes instead of making some “not now, but call me again” excuse (like call me again after I’ve had time to get used to the reality of it instead of just the idea). And like being terrified. Because it was at the middle school, on top of it. The age group I told myself was the one I could probably least well handle. Texas History and U.S. History, 7th and 8th grades respectively, which I can remember really not liking very much at all when I was in school.

But what to do, I’d already said yes! So… I did a whole Google thing, got together a bunch of really interesting quotes about “history” that we could talk about — just in case the teacher didn’t leave a proper lesson plan. Or in case he did leave a lesson plan, but I couldn’t make any sense out of it. And marched on over there to meet my fate.

And the rest, as they say, is history.

I did things like write the words “History… Herstory… Mystory… Mystery” on the board. And talked about how it’s the STORY that makes history interesting, not just memorizing the dates and the places and the names. And who writes that story matters very much to whether it actually tells us very much about what is real.

And in the midst of that, the absolute thrill and rightness of this little snippet that came “out of the blue” and unprompted by me in its specifics:

Kid in class: “When did racism start, anyway?”

Me: “I dunno, I think maybe it’s been around almost forever. At least long enough that hundreds of years ago a bunch of white people went and stole people from Africa and took them back to their countries to be slaves.”

I also discovered, on the other hand, that I am not very good when it gets down to the nitty-gritty of “covering points 1-15 in the textbook.” For all kinds of reasons including all the reasons I didn’t like history very much when I was in school.

I was so touched by the kids. All of them…

The “very good, Straight-A students” who always had their hands up and always knew the textbook answers made me a little sad. Because they are trained so well in being eager to please the teacher that I was pretty sure the only thing they were learning was how to please teachers and pass tests.

The bright and inquiring ones who, before I realized that passing around fortune-cookie strips of history quotes made it impossible to get anywhere near covering points 1–15 in the textbook, chose the deepest and most challenging quotes when I asked what they really liked and wanted to share. 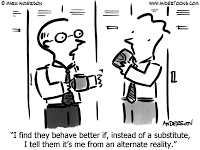 The kids, mostly boys, who were either so overmedicated for their ADHD, or suffering from such a horrible situation at home, they were almost catatonic and with a look of ancient suffering in their eyes.

The ones struggling with just the basics of reading comprehension, never mind getting a grasp on what “history” might mean in their lives and why it might be interesting to study it.

The grumpy ones who probably should be spending most of their days in art and music and writing classes.

The loud and boisterous ones who should be spending most of their days out running around in nature, digging in the dirt, catching frogs and snakes, and playing in the water.

The rare gift of seeing one of those “borderline” kids suddenly light up, say “aha, yes! and you know what THAT makes me think of is…”

And my immediate concern that too much of this can’t be allowed, or the principal is going to show up at the door because it starts to sound, from outside, like nobody is in charge here.

Each one of those classes should have been at least three or four smaller classes. Of six or seven kids each.

But… I might find some other way I can go spend time with some of those kids and help them find what they want to learn, what they’re excited about, how to cope with the limitations of the textbooks and the need to do well on the tests.

I had a blast.

[Sarito Carol Neiman (then just “Carol”) was a founding editor of The Rag in 1966 Austin, and later edited New Left Notes, the national newspaper of Students for a Democratic Society (SDS). With then-husband Greg Calvert, Neiman co-authored one of the seminal books of the New Left era, A Disrupted History: The New Left and the New Capitalism and later compiled and edited the contemporary mystic Osho’s posthumous Autobiography of a Spiritually Incorrect Mystic. Read more articles by Sarito Carol Neiman at The Rag Blog.]