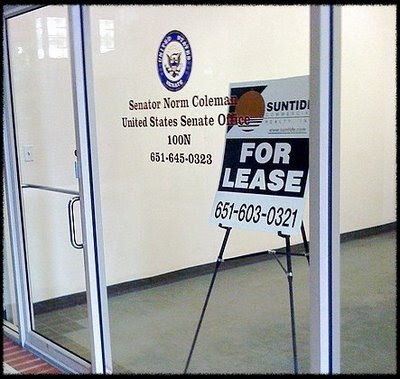 And the old-boy National Republican Senatorial Committee will have a lot of crow to choke down. Below is a reduced version of a November 2008 G.O.P. plea for money to “stop the liberals’ plan to break our firewall!” 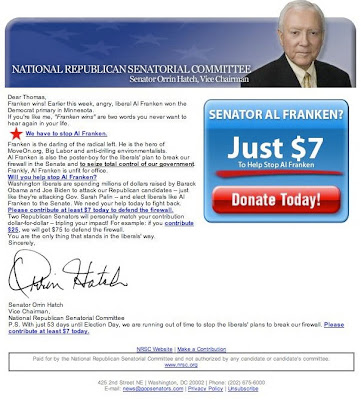 “If you are like me, ‘Franken wins’ are two words you never want to hear again in your life. We have to stop Al Franken! He is the darling of the radical left. He is the hero of Move-on.org, Big Labor and anti-drilling environmentalists. Al Franken is also the poster boy for the liberal’s plan to break our firewall in the senate and to seize control of our government. Frankly, Al Franken is unfit for office.”

Then Orrin winds up his hysterical diatribe:

“Washington liberals are spending millions of dollars raised by Barack Obama and Joe Biden to attack our Republican candidates, just like they are attacking Gov. Sarah Palin — and elect liberals like Al Franken to the Senate.”

Well, what a difference eight months makes, Orrin. Not only did Poster Boy nemesis Saturday Night Live comedian, Al Franken win, you will now get to smile and shake his hand.

After all the dust settled on the old crumbled firewall, six GOP senators had lost their places on the wall, falling off just like a bunch of Humpty Dumpties including a long-time Dumptyette, Liddy Dole. Add a G.O.P. defection to “the liberals,” the disgrace of Ted Stevens of Alaska, and viola’ the despised ‘liberals’ now tote up a 60 seat majority.

2 Responses to Sign of Times : Coleman Out, Franken In